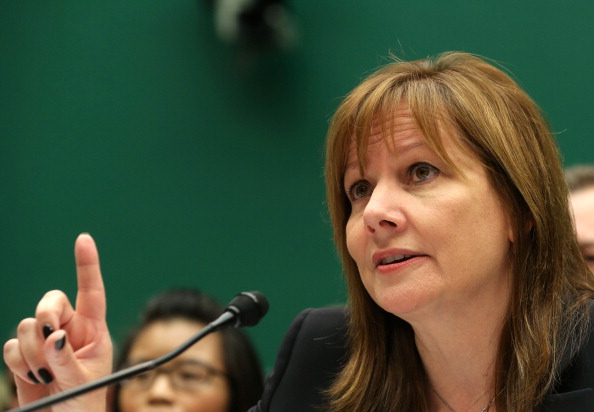 WASHINGTON, DC – JUNE 18: General Motors CEO Mary Barra testifies during a House Energy and Commerce Committee hearing on Capitol Hill on June 18, 2014 in Washington, DC. The committee is hearing testimony on GM’s internal recall investigation and how the company is changing to prevent another safety crisis similar to its deadly delay in recalling millions of defective cars. (Photo by Mark Wilson/Getty Images)

General Motors CEO Mary Berra appeared before the U.S. House Committee on Energy & Commerce Subcommittee on Oversight and Investigations Wednesday after a recall and allegations that GM covered up important details relating to faulty ignition switches.

Among her prepared remarks Berra said: “I am not going to accept business as usual at GM. It’s time — in fact, it’s past time — to insist on total accountability and make sure that vital information is shared across all functions in our company.”

In concert with her remarks, GM launched a website devoted to the recall involving over 5 million of its cars.  Barra had appeared before Congress in April of this year after the allegations surfaced.  On the website Berra tells consumers:

“If you are driving an affected vehicle, until the ignition recall repairs have been performed, it is very important that you remove all items from your key ring, leaving only the vehicle key. The key fob (if applicable) should also be removed from your key ring. Before exiting the vehicle, it’s also very important for you to make sure the vehicle is in “Park” or in the case of a manual transmission, to put the transmission into reverse gear and set the parking brake.”

“I want to make it clear to our customers that you are our compass. You are at the heart of everything we do and we intend to make this recall as smooth as possible for you so we will not let it ever happen again. We will learn from this and we will be a better company. Thank you for your patience.”

Below is a complete transcript of Berra’s prepared remarks from Wednesday’s appearance:

I appreciate the chance to appear before you again today on the ignition switch recall issue.

Before proceeding with my brief remarks, I want to once again express my sympathies to the families that lost loved ones and to those who suffered physical injury. I am ever mindful that we have a special responsibility to them, and the best way to fulfill that responsibility is to fix this problem by putting in place the needed changes to prevent this from ever happening again.

When I was here 11 weeks ago, I told you how we intended to proceed with this matter. I promised that we would conduct a comprehensive and transparent investigation into the causes of the ignition switch problem. I promised we would share the findings of Mr. Valukas’ report with Congress, our regulators, NHTSA, and the Courts. I promised we would hold people accountable and make substantive and rapid changes in our approach to recalls. Finally, I promised we would engage Ken Feinberg to develop a just and timely program for compensating the families who lost loved ones and those who suffered serious physical injury.

We have done each of these things and more. And I welcome the opportunity to discuss them with you further.

The Valukas report, as you now know, is extremely thorough, brutally tough and deeply troubling. It paints a picture of an organization that failed to handle a complex safety issue in a responsible way. I was deeply saddened and disturbed as I read the report. For those of us who have dedicated our lives to this company, it is enormously painful to have our shortcomings laid out so vividly. There is no way to minimize the seriousness of what Mr. Valukas and his investigators uncovered.

On June 2, Mr. Valukas presented the findings of his investigation to the Board of Directors of General Motors. I will leave it to Mr. Valukas to comment on his report. For my part, I want you to know my reaction to the report and some of the actions I have taken since receiving it.

1.   After reviewing the Valukas report, we made a number of personnel decisions. Fifteen individuals identified in the report are no longer with the company.

2.   We have restructured our safety decision-making process to raise it to the highest levels of the company, addressing a key point in the Valukas report that critical information was kept from senior management. Under the new system, that problem should never be repeated.

3.   We are currently conducting what I believe is the most exhaustive, comprehensive safety review in the history of the company. We are leaving no stone unturned and devoting whatever resources it takes to identify potential safety issues on all of our current vehicles and on vehicles no longer in production. I’ve told our employees it’s not enough to fix this problem. Our responsibility must be to set a new industry standard for safety and quality. This is the new norm.

4.   We announced the creation of, and have implemented, a new Global Product Integrity organization that will enhance our overall safety and quality. And, we are taking an aggressive approach on recalls as we are bringing greater rigor and discipline to our analysis and decision-making process regarding recalls and other potential safety-related matters. It is difficult to announce so many recalls, but it is absolutely the right thing to do.

5.   As we discussed last time, we engaged Ken Feinberg to review options for establishing a compensation program and that process is moving forward rapidly. Mr. Feinberg has full authority to establish eligibility criteria for victims and determine compensation levels. He has indicated he will share the final criteria with us by the end of the month. We also expect to begin processing claims by August 1

6.   We created a new position of VP of Global Vehicle Safety and appointed Jeff Boyer, a highly respected expert in the field, to the position. I have personally told Jeff he will have whatever resources he needs to do this job. In fact, we have named a senior attorney to support him and to facilitate rapid information-sharing across the organization.

7.   We added 35 safety investigators that will allow us to identify and address issues much more quickly.

8.   We instituted Speak Up For Safety, encouraging employees to report potential safety issues quickly. And we are going to recognize employees when they do so. More than just a campaign or program, it’s the start of changing the way we think at GM.

Two weeks ago, I purposefully addressed the entire global workforce about the report. I told our team as bluntly as I knew how, that the series of questionable actions and inactions uncovered in the investigation were inexcusable.

I also told them that while I want to solve the problems as quickly as possible, I never want anyone associated with GM to forget what happened. I want this terrible experience permanently etched in our collective memories. This isn’t just another business challenge. This is a tragic problem that never should have happened.  And it must never happen again.

This report makes a series of recommendations in eight main areas. I have committed the company to act on all of the recommendations, and we are moving forward on many of them already.

Finally, Mr. Chairman and Members of the Committee, I know some of you are wondering about my commitment to solve the deep underlying cultural problems uncovered in this report. The answer is I will not rest until these problems are resolved. As I told our employees, I am not afraid of the truth.

And I am not going to accept business as usual at GM. It’s time — in fact, it’s past time — to insist on total accountability and make sure that vital information is shared across all functions in our company… so we can unleash the full power of our 200,000 employees, our 21,000 dealers and our 23,000 suppliers.

We are a good company, but we can and must be much better. That’s my focus and that’s my promise to you, our employees, our customers, our shareholders and the American people.

Thank you again for having me here today.

In the wake of the allegations 15 GM employees were fired and five others were reprimanded.

Rep. Phil Gingrey, R-Ga., asked about engineers and executives at GM who failed to fix the safety problem: “How could they not know?”

The incident “smacks of a big cover-up to me,” Gingerey said.