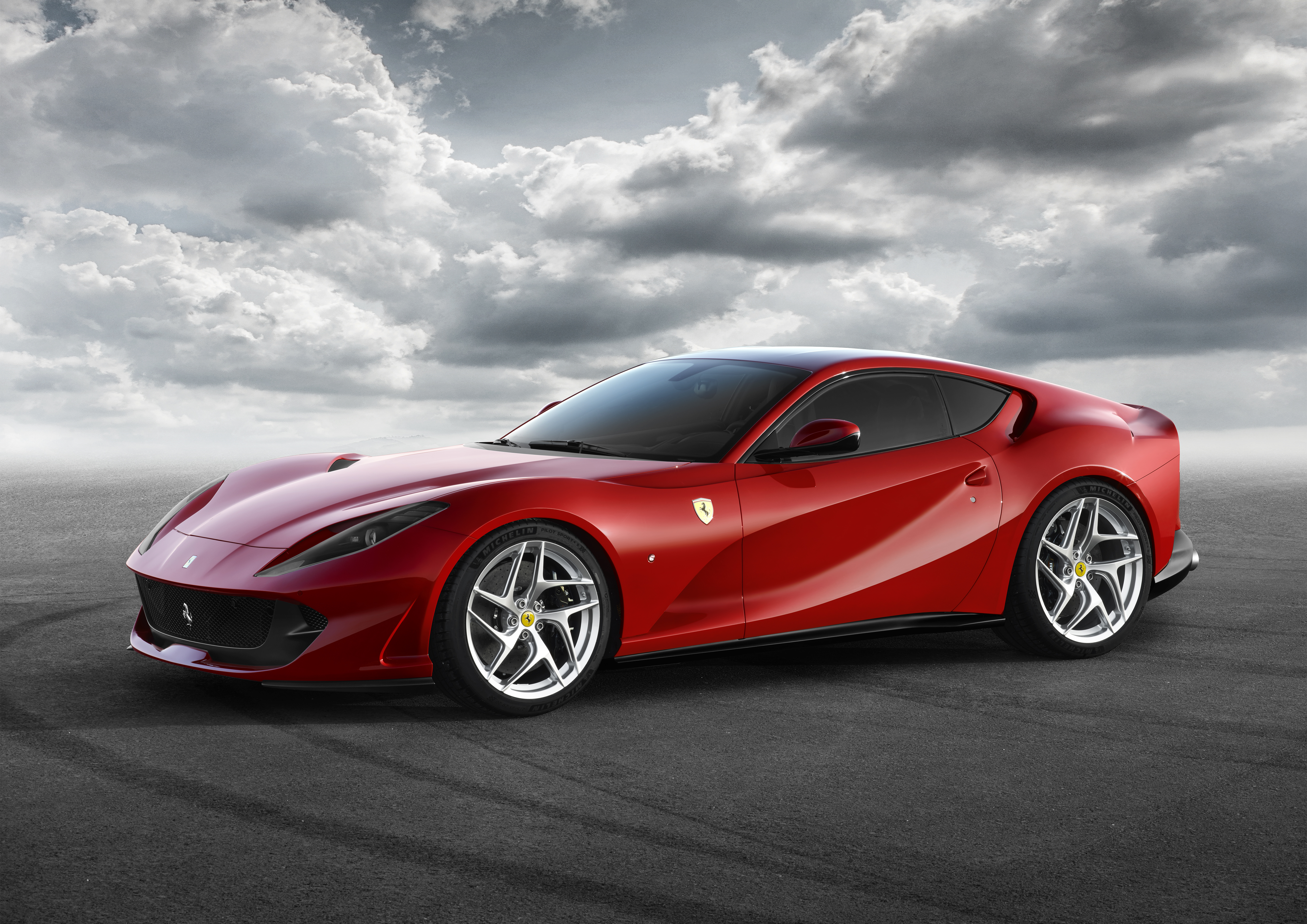 Maranello, 16 February 2017 – Ferrari has selected the 87th edition of the Geneva International Motor Show for the world premiere of the new 12-cylinder berlinetta, the 812 Superfast, the most powerful and fastest Ferrari in the marque’s history. This new car not only introduces a plethora of innovative features but is also particularly significant as the V12 series marked the official start of the glorious Prancing Horse story in 1947, 70 years ago this year

Most powerful ever 800 cv production engine

The 812 Superfast thus ushers in a new era in Ferrari 12-cylinder history, in doing so building on the invaluable legacies of the F12berlinetta and F12tdf. It is aimed at clients demanding the most powerful and exclusive Ferrari in the range: an uncompromising sports car that will deliver exhilarating driving both on road and track yet also be comfortable enough to allow its owners enjoy it as an all-round experience.

Powered by a new 6.5-litre V12 engine that unleashes 800 cv, the 812 Superfast is the new benchmark in the mid-front-engined sports car segment, achieving maximum power output at 8,500 rpm, which translates to a specific power output of 123 cv/l. Figures that no other front-engined production car has ever even come near to delivering and which ensure the kind of thrilling top-end performance that is the exclusive characteristic of Ferrari’s noble V12 heritage. The engine’s power is underscored by a full, rich exhaust sound that exploits the acoustic clout delivered by its increased displacement. Maximum torque is 718 Nm @ 7,000 rpm, a significant 80% of which is already available at 3,500 rpm, improving both driveability and pick-up even at low revs. These performance levels were achieved in part by adopting a 350 bar direct injection system for the very first time on a high-performance engine and pairing it with variable geometry intake tracts conceptually derived from those of naturally-aspirated F1 engines. The 812 Superfast’s dual-clutch transmission has specific gear ratios which, combined with shorter up and down-shifting times between gears, sharpen throttle response still further.

The 812 Superfast is equipped with leading-edge control systems and components, resulting in unparalleled handling and roadholding. It’s the first Ferrari to sport EPS (Electric Power Steering) which, in accordance with Ferrari’s uncompromising engineering approach, is used to fully exploit the potential of the car’s performance and, through the complete integration with all the electronic vehicle dynamics controls – including the latest 5.0 version of Ferrari’s patented Side Slip Control (SSC) – make its powerful performance easier to handle and even more thrilling to exploit. The vehicle controls also feature, for the first time, the Virtual Short Wheelbase 2.0 system (PCV) which, following the experience gained with the F12tdf, features a further evolution of the software that improves the nimbleness of the handling and reduces the vehicle response times even further. 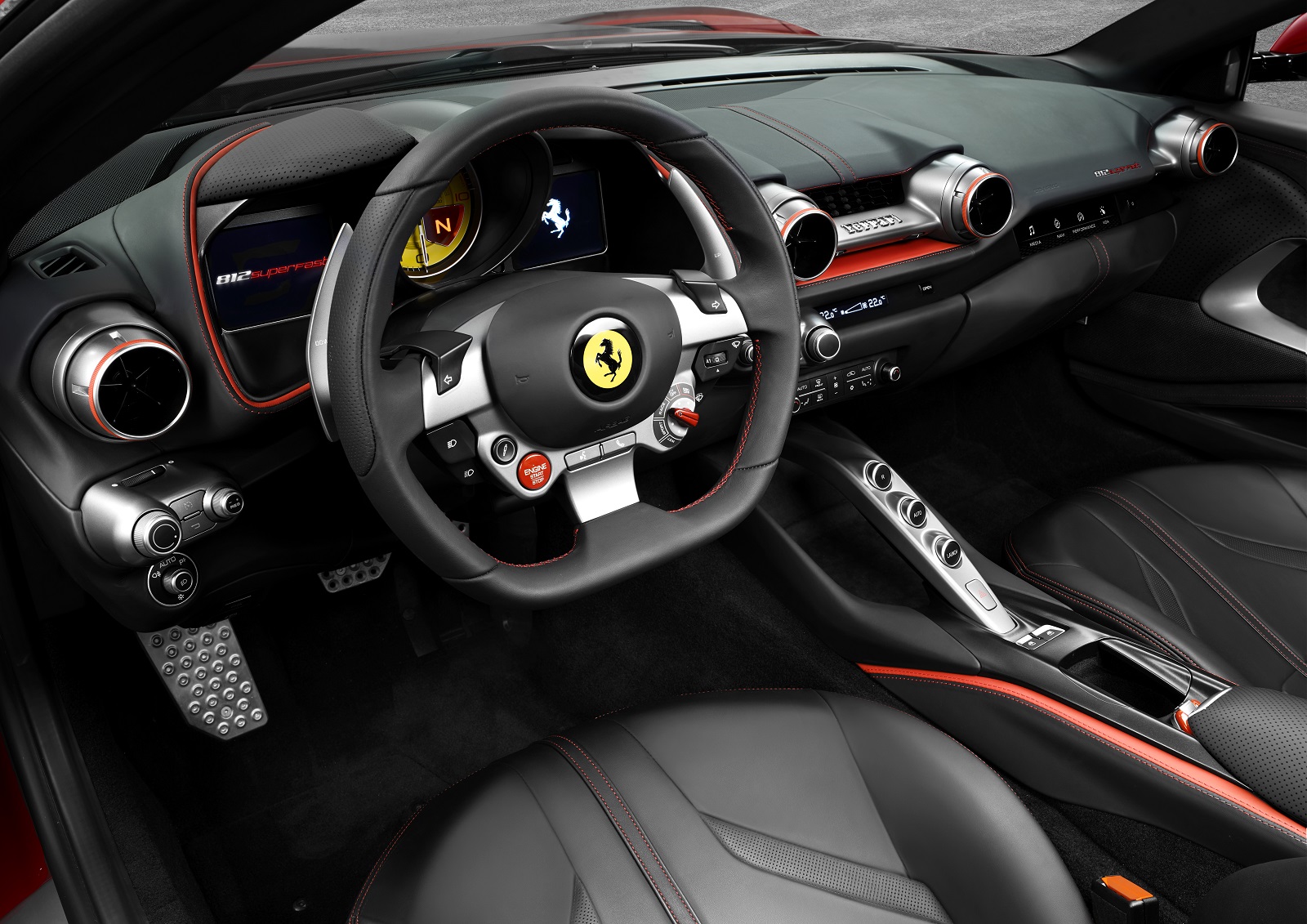 Designed by the Ferrari Styling Centre, the new 812 Superfast redefines the formal language of front-engined V12 Ferraris, underlining the car’s exceptional performance with very sporty lines and proportions. Seen in silhouette, the 812 Superfast has a fastback sleekness: a two-box design with a high tail reminiscent of the glorious 365 GTB4 of 1969. The design of the flanks visually shortens the tail and is characterised by impressively muscular wheelarches which imbue the 812 Superfast with the power and aggression warranted by its imposing V12. Full-LED headlights integrated into the design of the sculpted air intakes on the bonnet also emphasise that front muscle, integrating with, and wrapping around the front wheelarch. At the rear, four round tail-lights inspired by Ferrari tradition emphasise a design crafted around horizontal lines and give the 812 Superfast a broad, imposing stance, visually lowering both spoiler and cabin. As with all Ferraris, style and aerodynamic function are seamlessly integrated to produce innovative solutions and forms. Two examples are the multi-functional frontal section, which incorporates a cluster of aerodynamic solutions including active flaps at the front of the underbody, and the rear flank which features an unprecedented aerodynamic by-pass to increase downforce. The car is being launched in a special new colour, Rosso Settanta, which marks the company’s 70th anniversary.

The interior of the 812 Superfast has been revisited in line with the more extreme exterior whilst maintaining unaltered the exceptional on-board comfort and space that Ferrari’s front-engined V12 berlinettas have always offered. The cabin has been given a sportier, more radical look with the main elements seeming to float, creating an effect of both thoroughbred racing eagerness and lean elegance. The horizontal dash loops stylishly around the central air vents for a sophisticated, sculptural look. New, more sporty and ergonomic seats feature alongside the new HMI, including new steering wheel and instrument clusters and the latest infotainment and air-conditioning units. 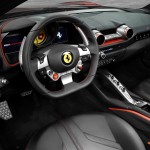 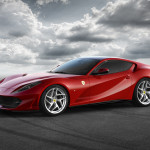 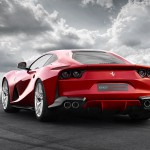 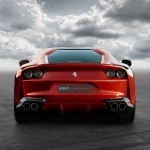 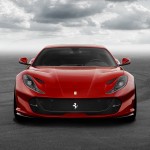 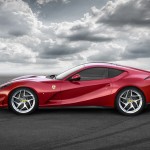