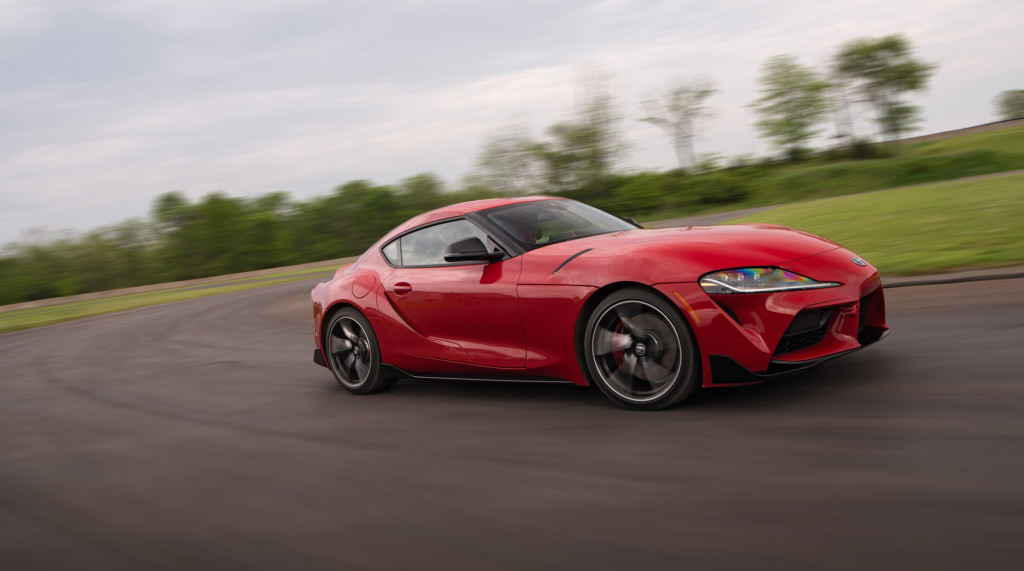 When I had my first 4C back in 2015, I characterized it as a girlfriend (or boyfriend to be fair) who was the hottest one you ever had, tattooed from head to toe sporting a nose ring and a “I don’t give a f—k” attitude.  Not one you took home to meet the parents, and someone who always left you breathless and wanting more.

Then Toyota delivered me a 2020 Toyota Supra for a recent week. Hello Supra.

I was at the motorsports launch of the Supra in February 2019 at Daytona International Speedway. It came shortly after its debut in Detroit. The Supra was making a comeback after a 20-something year hiatus and I was anxious to see what the fuss was all about.

The first thing I learned is Tetsuya Tada, the 2020 Toyota Supra’s chief engineer, can’t speak German, nor English. I wanted to ask him about the differences between the Supra and the BMW Z4 which the Supra was co-developed with.  Welp, Tetsuya Tada doesn’t speak German, and his English translator made it seem as though that last thing Mr. Tada wanted to talk about was BMW.

The second thing I learned was the Supra was (is) a beautiful car. I couldn’t wait to spend some time behind the wheel. It was something I didn’t get to do on that February day in Daytona, although I did learn that Toyota sure knows how to cater a car announcement.  I was also at the debut of the 2021 Supra at Daytona earlier this year, but only said ‘hi’ to Mr. Tada, and ate a lot.

Between the time of that first announcement and the week I got to spend with the Supra, I had a week with the new BMW Z4, a car which I said was “a damn sexy car.”

So, now you’re all caught up.  Well almost.

Toyota brought back the iconic Supra after a 22-year absence for 2020.  It’s now a two-seat sports coupe having done away with the back seats which were nearly useless in previous versions any way.

And while it may have the skeleton of the Z4, I can now attest to the fact that it is different.  There are three variants to choose from: base 3.0, 3.0 Premium and Launch Edition.  Under the hood the Supra is powered by a turbocharged 3.0-liter (see what they did there) six-cylinder with 335 horsepower and 365 lb-ft of torque delivered to the rear wheels with an 8-speed automatic. 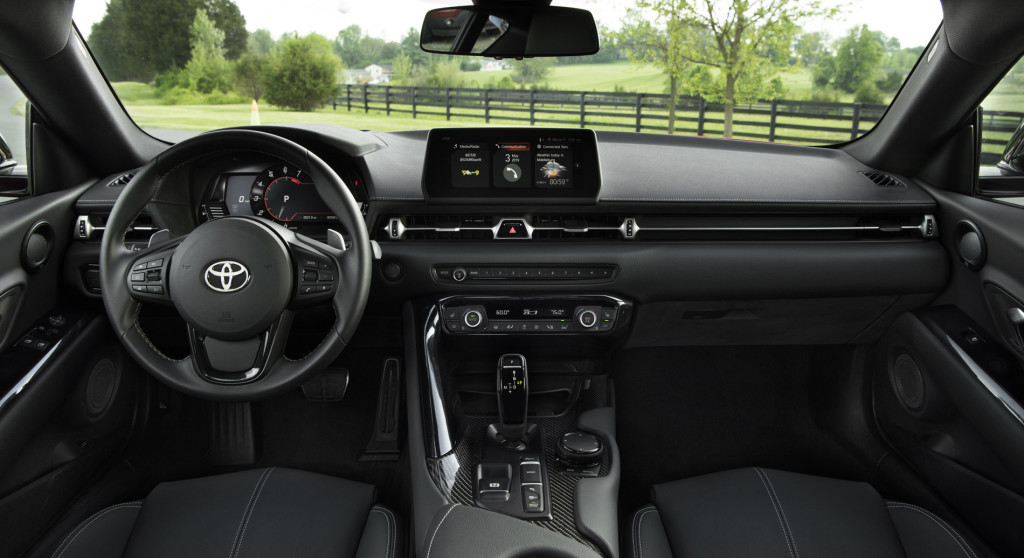 The 3.0 Premium gets the Nav JBL package as standard. It also comes with upgraded rear brakes, full leather upholstery, a head-up display, a wireless charging pad, and heated seats. The Launch Edition trim is limited to the first 1,500 Supras to arrive in the U.S. and gets dark wheels, a commemorative plaque set in carbon-fiber trim, and available red leather upholstery.

My tester for the week was the 3.0 Premium with the Driver Assist package. There was that beauty sitting in my driveway and I couldn’t wait to get behind the wheel.  Of course, I had to try and compare the Supra to my beloved 4C.  Both look like what they are, gorgeous supercar type head turners. In fact, much like the weeks I had with the 4C people glanced my way, and several took pictures both in traffic (naughty drivers you) and in parking lots.

On the road the Supra is a dream come true.  Though it’s a track car, and I didn’t have the time to go to a real track, I was able to stretch out the legs a bit, in a safe way of course.

In the 4C the engine, and its supercharger, are right behind your head making conversation and anything else beside the jet-sounding whine impossible in the one piece all carbon-fiber cockpit. The Supra interior is a nicer place to be, more comfortable, with only a hint of carbon fiber.   To be fair the similarity to its BMW Z4 cousin can be seen in the cockpit.  My Premium tester had the head-up display, an 8.8-inch infotainment touchscreen, a 12-speaker audio system, and larger rear rotors than the base car.  Unlike its Z4 cuz, there are only two drive modes Normal and Sport. Dialing up the Sport tweaks the throttle, transmission, steering, exhaust, dampers, and limited-slip differential into settings for more aggressive driving.

I, of course, immediately took the Supra to my “safe place” a relatively straight stretch of road with embankments on either side and very little traffic, so I could turn it loose. Yes, there is launch control, but it’s as confusing to engage as trying to enter a cheat code on a PS4 for someone over 50. I did manage to dial it up once and ended up with a 0-60 time of 3.5 seconds, and a 0-100 in 9.8 with a ¼ mile speed of 123 mph. Impressive.

The Z4 I tested had the I-4 2.0 engine with 255 horses so the comparison on the road might not be a fair one. For 2021 Toyota is offering a 4-cylinder, but will it be as much fun to drive?  Only time will tell (it’s also bumping up the 3.0 horses to 385). One thing that hasn’t been officially announced for 2021 is a manual transmission.  Some purists might bemoan the lack of clutch sticking out from the floor, but on the street, I certainly didn’t miss it.

The Supra then is like the hot girlfriend (or boyfriend) with only a few tats, a diamond stud in place of the nose ring, and much better manners.

Toyota of course does have another sports car. The 86, once known as the FRS, has a smaller engine, wheelbase and can be had as a manual shifter.  It’s a collaboration between Toyota and Subaru and is cheaper and for those with less experience should be better to let loose while maintaining control.  I hope to have a week with one in the near future. The Supra can be compared to the Z4 in price, but not in power, though the Z4 (especially the redesigned one) is a very good car to consider.

For the record, Alfa is doing away with the 4C, and while I was sad to see it go, I can understand why. Sure, its great car and I will miss it. But the Supra has now taken the coveted Best-Car-Of-All-Time-Ever award.  Being a performance-oriented sports car that can actually be used to do something more than get from point A to point B, I suspect that the Supra will be around for may years to come. 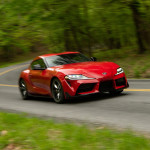 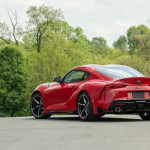 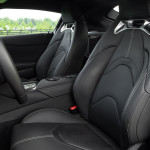 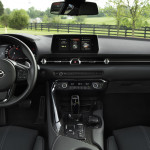 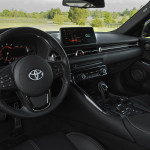 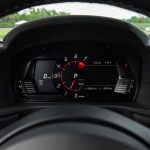 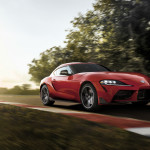 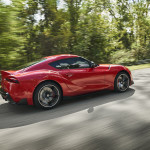 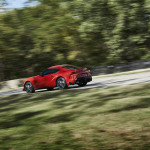 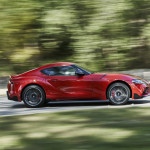 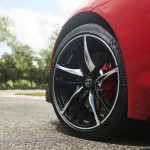 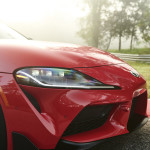 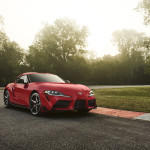 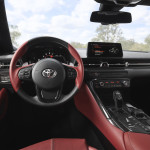 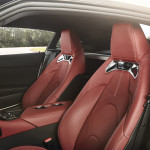 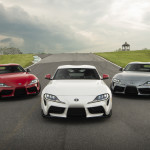 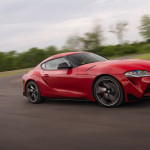 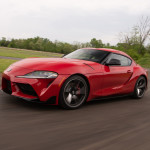 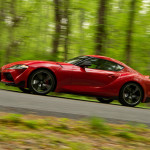