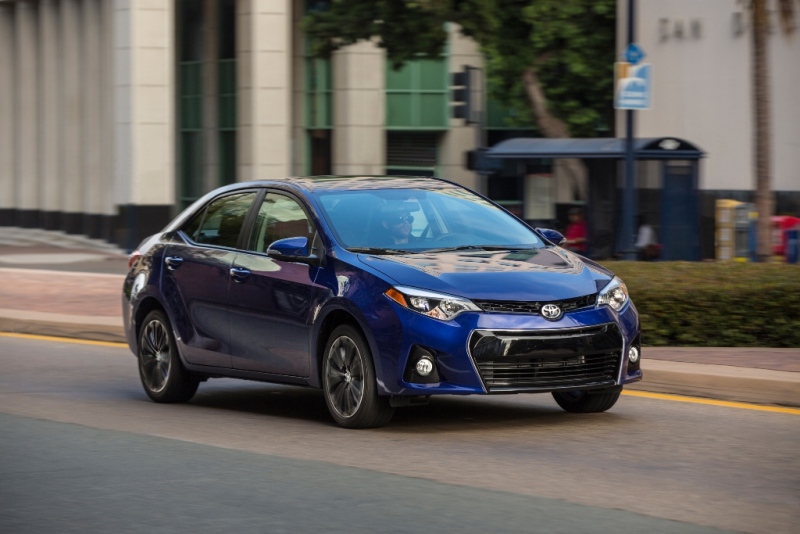 A good soldier knows the art of camouflage. They can expertly blend in with their surroundings only appearing when the job needs to be done.  Then they disappear back into the landscape. Some cars are like this; not flashy, or brash. They are simply there, getting the job done of delivering us from point A to point B without a lot of fluff, very little fuel and ready to blend back into their surroundings until called upon again.

That’s the story for this week. The subject is a car that outsells most, is on the road everywhere, yet is innocuous, just another brick in the wall.

The Toyota Corolla is currently the fifth bestselling car in America, and for good reason. What it is is a compact sedan that is inexpensive, gets good fuel mileage has a ton of features and a decent amount of room.  What it is not is showy, ostentatious, luxurious or fast.

And according to the sales figures, that’s perfectly all right with millions of consumers.

As a car reviewer we usually want just the opposite of a Corolla. We want loud, fast, sporty; we are spoiled and want to be coddled in luxurious surroundings;  swaddled in soft supple leather inside a machine with more horses than will ever be needed. We want to be noticed, turn heads, leave others far behind at the stoplights.  Yet we can sometimes forget that what we like most isn’t always what appeals to the masses. It sometimes takes a week with a simple car in a plain wrapper to bring us back down to earth.

Our recent week with a new 2015 Corolla was just such a reminder. There were no smoky burnouts, no swaddling, no one really paid attention.  We were just another motorist on the road, going from point A to point B; the journey wasn’t what the Corolla was all about, it was simply about getting us there.

Toyota full redesigned the Corolla for 2104; for this year all that’s new is a fold down center arm rest on all but the base model and the Premium package now has the Driver Convenience package as standard.

There are four main trims for the Corolla: L, LE, LE Eco and S.  Above the base L model you can add the Plus and Premium sub-trims. One of the most attractive things about the Corolla is the amount of standard features offered on the base model; LED headlights, powered accessories, A/C steering wheel mounted controls, Bluetooth and a USB/iPod interface with an auxiliary audio jack.

Moving up to the LE adds one inch bigger wheels (16 from 15), climate control, rearview camera and a 6-inch touchscreen display. The Plus package gets you alloy wheels, and the Driver Convenience package, which includes the sunroof, keyless entry and ignition, a roof-mounted antenna , satellite  and HD radio, a navigation system and Toyota’s Entune App Suite mobile-app integration. The Premium upgrade adds heated power front seats and upgraded vinyl upholstery.

The LE Eco has all the LE features in addition to efficiency-maximizing engine and transmission tuning, low-rolling-resistance tires, a rear spoiler and enhanced aerodynamics. The Eco Plus ups the wheel size to 16-inch, adds an Eco driving mode and gives you all the upgrades  from the LE Plus, as does upgrading to the Eco Premium.

The S trim gets you some unique wheel rims, chrome grill frame, foglights, rear spoiler,  chrome exhaust tip, a Sport driving mode , a sportier looking gauge package and paddle shifters.  The S Plus moves the wheel size up to 17-inch alloy wheels a firmer suspension and rear disc brakes (rear drums are standard on all other models).  The S Premium (our model for the week) adds the upgrades found on other models.

The exterior, despite last year’s refresh, has a nice look, although as is the story of the Corolla, isn’t awe inspiring. The interior is well laid out, and despite the plainness of the outside is actually quite nice looking along with being ergonomically functional. We had the S-trim seats which have a bit more bolster, but truth be told the lack of lumbar support is one of the few minuses we found.   The touch screen interface is also nice with clean, simple graphics that include responsive virtual buttons. It’s actually quite surprising, given that this Is an economy car that tops out with an MSRP of $25,000; it easily rivals those found in higher end cars.

All the Corolla line gets its power from a 1.8-liter 4-cylinder engine, except for the LE Eco trim. The powerplant produces 132 hp. Our model had the CVT mated to the engine although a six-speed manual can be had.  The CVT in the S trim has up to seven shift points when the paddle shifters or the shift gate are used.  For all the trims, the CVT will mimic a hydraulic transmission under aggressive acceleration or deceleration.  For the most part however the CVT does what a CVT does; no sense in complaining, it works and delivers decent fuel mileage. The power and CVT combined are adequate, however as already noted, you’ll never be a speed demon (0-60 took and agonizing 9 seconds).  The interior is relatively quiet and a long road trip from Florida to North Carolina for some NASCAR work showed us that the Corolla is capable and thanks to 37 mpg highway can save a ton of money at the pump.

After our week with the Corolla, we understood why they sell so well. Sure it may not ooze luxury or have you dreaming of driving around the Nurburgring, but it will deliver you from point A to point B in comfort. It will also have you visiting gas stations less often and do almost everything you ask of it. All for a price that will have your car payments lower than you seen in awhile.

The Corolla will be there when ready.  It may not stand out in a crowd, may just be another brick in the wall, but given the price and reliability, there is no reason the Toyota Corolla won’t be a best seller for many years to come.