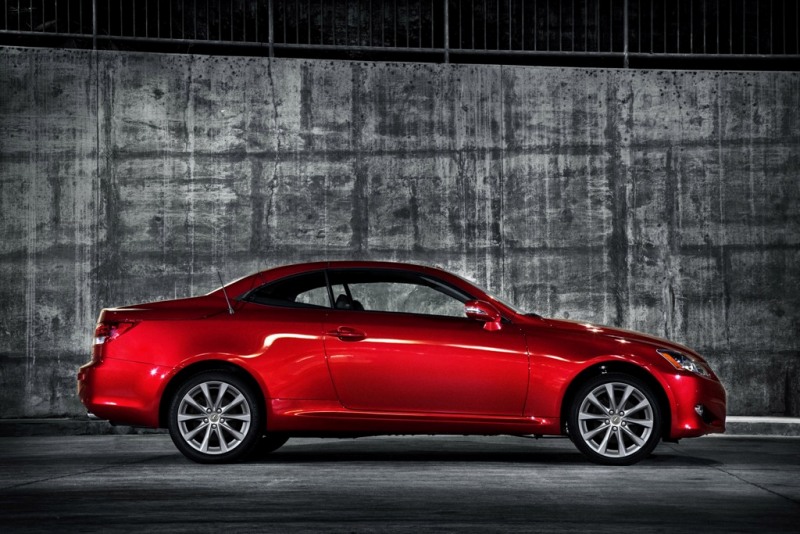 Things change. That’s an inevitable part of life.  Technology progresses, times change, even Mother Nature changes through evolution.  Heck, we were once living in caves and happily grunting when we saw flames.  Today we live in suburbia, hunt for food only in the grocery store and call 911 when we see flames somewhere other than the backyard grill.  Change can be good; moving forward can actually be something to look forward to, something to embrace.  There are those however, that haven’t heard that change is good, and that’s much to their determinant.

The luxury convertible niche is a small one.  BMW has the 4 Series and Infiniti has the Q60, and Lexus has the IS350 C, the subject of this week’s review.   We already know the Lexus brand to be a good one, with quality materials, craftsmanship, and luxury appointments that make anything Lexus a very nice thing to own and drive.

The IS350 C is no different. The retractable-hardtop luxury convertible is very well made, and comes very well equipped. It’s also offered in a IS250 C, which has a smaller engine.  Being a Lexus the base model comes well equipped with such niceties as keyless ignition and entry, dual-zone automatic climate control, cruise control. leather upholstery, eight-way power front seats with lumbar control, a leather-trimmed steering wheel and shift knob, a power tilt-and-telescoping steering wheel with audio and display controls, an auto-dimming rearview mirror, Bluetooth phone and audio connectivity and an eight-speaker sound system with a six-CD changer, satellite radio, auxiliary audio input jack and iPod/USB interface.  There is also the Safety Connect telematics system, which includes collision notification, stolen vehicle and emergency assistance services, which is also standard.

One buys a convertible to drop the top and have the wind in your hair while zipping along.  The problem we had during our week was given the fact that we had our tester in Central Florida during the first week of September, which to us Floridians means the hottest part of an already hot summer, driving a convertible with the actual top down is done by either tourists or those with a death wish. Despite this however we did drive with the actual top down, it took 20 seconds start to finish and was done smartly.

With the top down the IS 350 C is a pleasant thing to drive.  Same with the top up truth be told.  Despite the convertible designation, the interior noise is actually consistent with a hard top. The 306 horses are adequate and can be unleashed rather easily, yet the car remains somewhat conservative never seeming to be on edge.  This isn’t a sports car in the sense of say the IS350 we had occasion to drive late last year.  The IS350 hard top we tried was far more spirited machine with a “sport” setting that turned the drive into pure joy.  There is sort of that type of setting on the 350 C; the ECT has more to do with transmission shifting and can be set to Power or Snow.  It’s not anything near the sport mode in the hard top.  In fact there is very little that can be compared to the four-door hard top cousin either inside, outside or under the hood.

And that’s a shame.

See the IS lineup moved to a new design theme for 2015; however the convertible has stayed the same as it has since at least 2013. Want the new style spindle grill, something we like very much? Sorry, can’t be found here, move along.  How about the Adaptive Variable Suspension and Sport S and Sport S+ modes of the other F-Sport models? Nope. Want the new revised interior trim, including piano black on window switches and instrument panel, and a backup monitor that adds dynamic grid lines to aid parking maneuvers?  How about the joystick to control the functions for the nav and other functions on the screen or an eight-speed transmission available on the hard top? Sorry, it’s still 2013 in this world.

For 2015 the IS 350 C gets only a new redesigned ‘organ-type’ accelerator pedal, the addition of Slacker Radio to the Lexus Enform system, and updates to iHeartRadio 4.0. That’s it.

That’s why we called the IS350 C the Forgotten One. It seems that while the rest of the line has been redesigned, the hard-top convertible has been left standing in the corner whimpering,” hey guys what about me?”

A good car? Sure, as are all Lexus products.  It’s just fallen behind the times ,and that is a shame. Because change is a good thing, something to be embraced, but something Lexus seems to be reluctant to do to the IS350 convertible. Something that could make a good car, a great one.