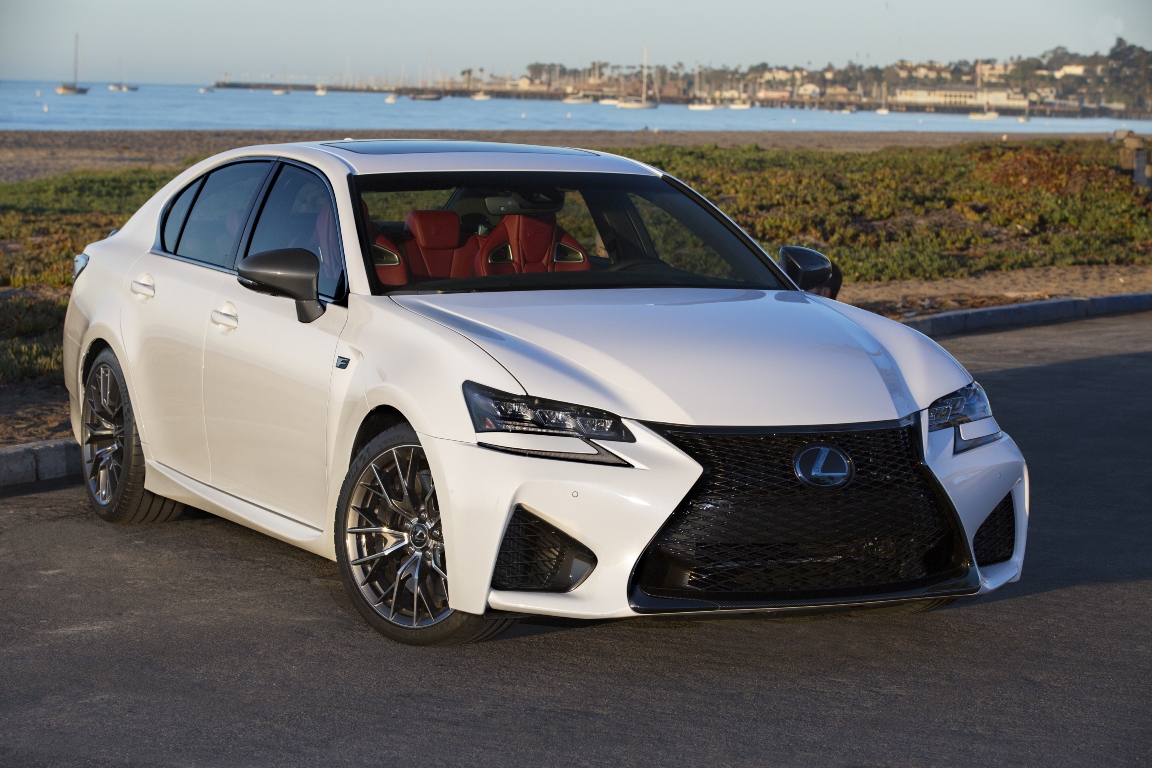 There are few things in life that are near perfection. The eggs are runny, there’s not enough ice in the drink, and the bed is almost soft enough, but…  Cars are the same way. When you test as many vehicles as we do, you find the good, the bad and the ugly.  Among those we consider good, few are near perfection.  The view is a bit off, the seat can’t be adjusted quite enough, the drive is a little rough, and the outside looks like a pretty girl whose missing all her front teeth.

However, we occasionally get those cars that have the right view, the proper seating position, a near ideal drive and are pleasing to look at. Lexus has such a thing, and it is indeed, at least in our opinion, near perfection.

Now few will argue that Lexus makes nothing but good things.  Their loyal legion of fans will attest to that.  Their latest good thing is the GS F, a new entry into the luxury sedan market.  After a week and a road trip with it recently, the Germans, and Detroit for that matter, better sit up and take notice.

Only three other cars in the storied history of Lexus have earned the sole designation of “F”. The F badge (which legend says stands for Flagship or Fuji Speedway but to us stands merely for Fast), has adorned only the IS, the LFA and the RC coupe.  For 2016 though the GS joins the fabled lineup. It’s supposed to be a RC F with two more doors. It shares the same  467-hp 5.0-liter V-8 under the hood and the same front fascia. However there are backseats and a bit of a styling refresh. Having tried the RC F, and found it very good, we did find the RC F is just too small and practical; the backseats are useless and while it is fun to drive, can be a bit uncomfortable for longer commutes.  The GS F is much different. There is plenty of room back and front.  And as we discovered, gives a smooth ride on the highway, and can become a pure beast with just a few button pushes.

The GS F is a rear-wheel drive only five passenger sedan. Being a Lexus there are a ton of standard features. There are LED headlights, leather upholstery, heated and ventilated eight-way power front seats with two-way power lumbar and driver seat memory functions. In addition, there is keyless entry and ignition, driver-selectable drive modes, a power tilt-and-telescoping steering wheel and heated auto-dimming side mirrors atop 19-inch wheels.

Tech features include Lexus’ Remote Touch interface, a 12.3-inch screen with navigation, a rearview camera and a 12-speaker surround-sound audio system with a CD player, satellite and HD radio and Bluetooth and Siri integration for select iPhones, and Enform Remote. The options include the Mark Levinson Premium Surround Sound system, orange brake calipers, and Brembo orange front and rear brake calipers with the “F” logo.

Our tester for the week had the Mark Levinson sound system (which for the record is one of the best sounding systems on the market) and was clad in Molten Pearl, which isn’t really pearl, but a fiery orange.

That orange color is what we first noticed. Orange and Lexus doesn’t sound like a good combination, sort of like banana and mayonnaise sandwiches (sorry Dale Earnhardt Jr.).  But the GS F with the orange livery is actually a very pretty car (still can’t attest the sandwiches, Junior).

The interior features a combination of synthetic suede, soft leather with aluminum trim with carbon fiber accents (there is also plenty of carbon fiber on the exterior including a carbon fiber rear spoiler). The front sport seats have just the right amount of bolster and adjustments for driving.

Oh, and about that drive.

The 467-hp 5.0-liter V-8 is mated to an eight-speed paddle-shifted automatic, and an electronically controlled torque-vectoring differential (TVD).  There is no manual available, and for once we would argue against it. The eight-speed automatic does such a good job of transferring the power to the road that a manual, especially in a sedan, would be almost comical.

For our week with the GS F, we had the opportunity to take a road trip from Orlando to Charlotte North Carolina to work the NASCAR race over the Memorial Day weekend. On the highway the GS F can mind its manners and cruise at 80-85 without effort.  A day off from the races however gave us a chance to spend a day wheeling twisty mountain roads, and oh what joy it was.

While competitors resort to boosted engines in their quest for power and efficiency, Lexus sticks by guns it knows best—natural aspiration for that crisp throttle response, power that rises aggressively with the rpm, and a beastly roar at the 7300-rpm redline.  The electronically controlled torque-vectoring differential can be set to one of three modes: Standard, Slalom and Track.  The Slalom and Track modes adjust the rear end for a more agile drive (Slalom), or more traction at higher speeds (Track).

Living in the flat lands otherwise known as Florida, we have no real opportunity to push a sports sedan to its limits. Not so during a week with the GS F. We headed north near the Blue Ridge Parkway in North Carolina during our day off from the track (but not on the Parkway mind you).  We were able to dial up the full Sport +, and Track mode and unleash the GS F. On the same twisty mountain roads we learned to drive on (and once outran the local sheriff in our mom’s car, a story for a different time), we set the beast loose. In short, it was an exhilarating afternoon and evening and the GS F handled anything we could throw at it.  We pushed it to the limit and never seemed to get anywhere approaching the outside of the GS F’s envelope.  We were able to coax a 0-60 time of 4.4 seconds, but for the record never neared the top, electronically limited, speed of 168 mph (if you consider 20 mph less than that “never near”). We were thoroughly entertained and smiling the entire time (and fortunately never met the local sheriff) and serenaded by the enhanced engine note transmitted through the speakers. The Active Sound Control isn’t artificial motor music.  Instead, bad noise is electronically canceled with an out-of-phase signal and the engine’s song is enhanced to produce a 7000-to-7300-rpm symphony.

There may be cars that can perform better, could outrun the GS F on the track, but for someone looking for an everyday sedan that can haul people, and haul ass the GS F is the ticket. In our opinion it can compete with the M5, RS7, CTS-V or the E63 AMG.  The price is comparable to those (the MSRP is $85,820).  For anyone in the market for a luxury sports sedan the GS F is worth a look. Sure loyal Mercedes, BMW, Audi or Cadillac buyers may never step outside their comfort zone, but they should.

The Lexus GS F is yet another good thing from the high end Toyota brand. Our week with it was a memorable one and we hated to see it go.  For those looking for a high-end luxury sports sedan would do well to take a turn behind the wheel o the new GS F, and should they decide to put one in their driveway, they can look forward to being entertained every day of the year.

All product specs can be found here (PDF) 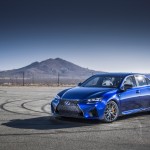 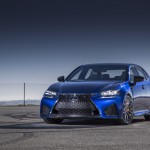 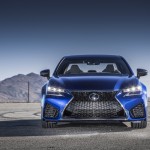 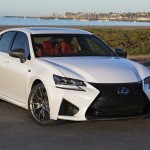 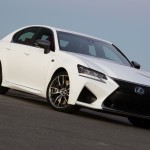 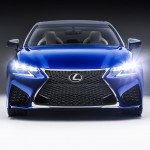 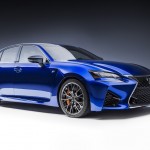 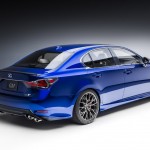 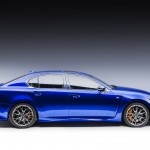 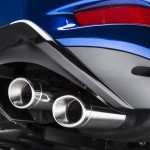 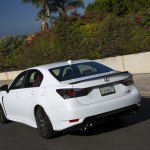 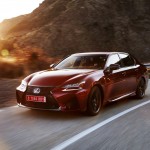 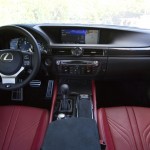 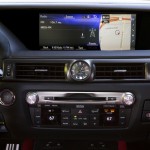 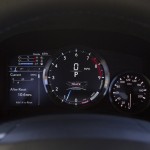 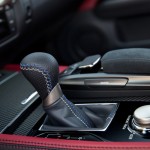 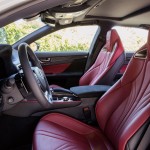 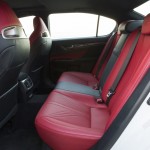 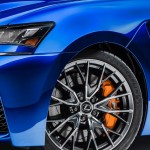