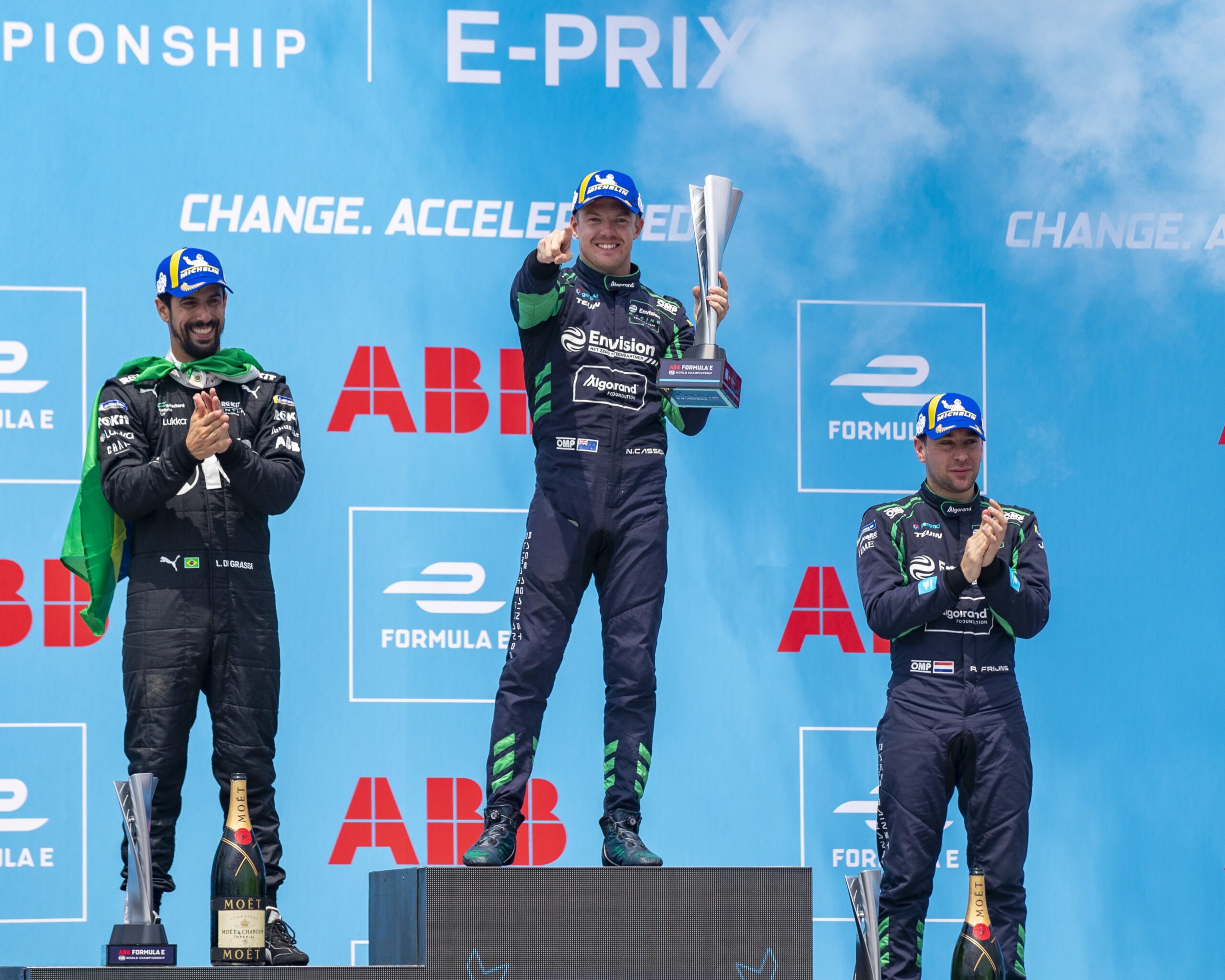 Nick Cassidy started on pole at the Brooklyn Street Circuit and ended the race on the top step of the podium, but his win was far from simple. After leading 35 minutes of a scheduled 45 minute race for the first round of the New York City E-Prix, he aquaplaned into the wall after the yellow flag came out for the rain that had turned into a downpour.

The race was immediately red-flagged to clear the wrecked car of Cassidy, along with the cars of Lucas Di Grassi who was running in second, Stoffel Vandoorne, and Edoardo Mortara which were also in the wall. Robert Frijns, running third, was the first driver to make the corner successfully.

However, when the stewards decided that the conditions weren’t safe for a return to racing, positions reverted to the lap before the stoppage, per FIA regulations, and Nick Cassidy was awarded his maiden win. He was joined on the podium by di Grassi and Frijns. 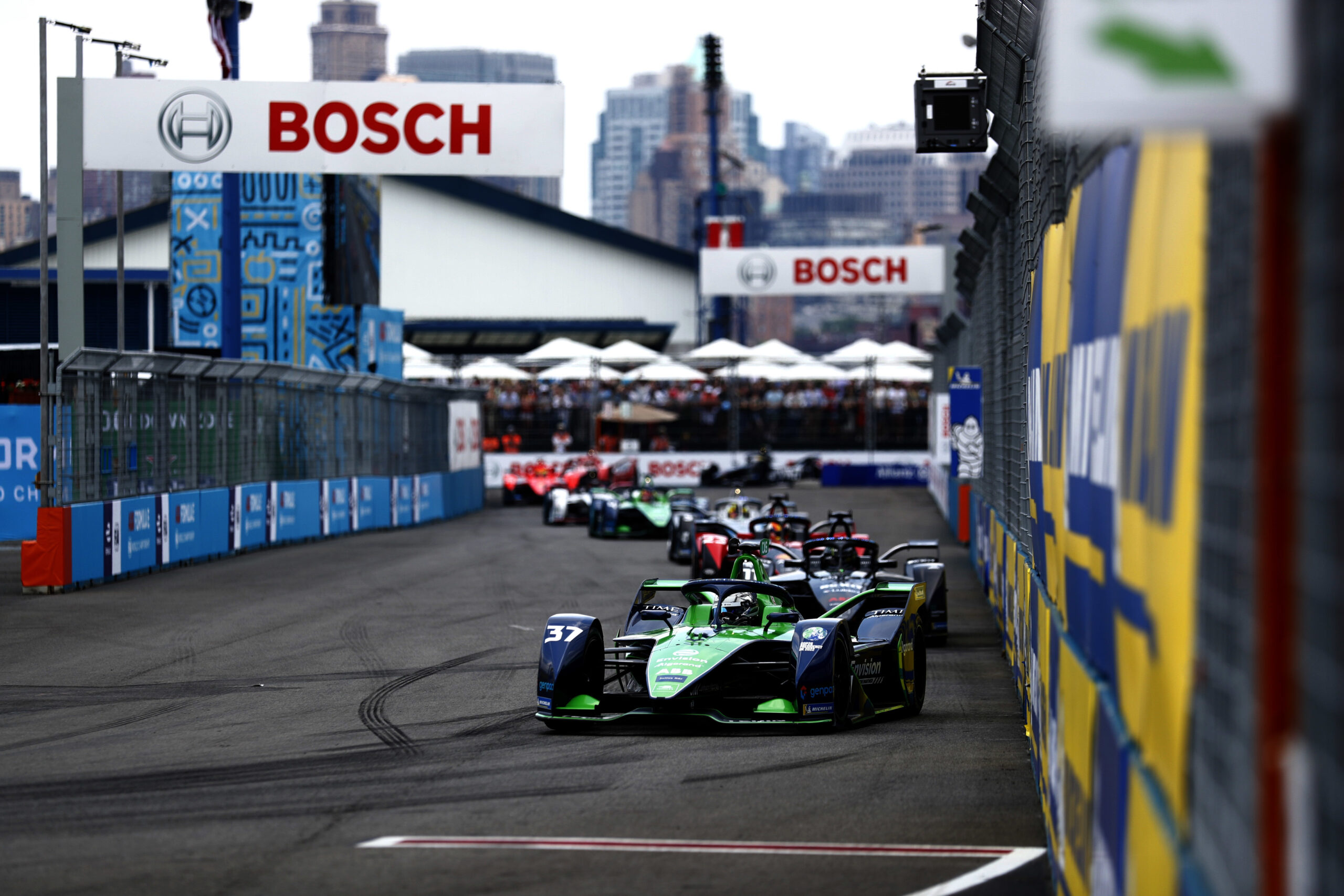 “It is such a rollercoaster of emotions,” said an elated Cassidy. “It felt like I did everything right today, felt like it was in the bag with ten to go, then it started raining. I was initially very disappointed considering that, but – and I know I’m biased – I think it is the right decision.”

“It is difficult for me to say too much, but I am super happy with the win and I don’t want to talk about the decision making process and all that,” he added. “But in terms of the race the team did a fantastic job, I had a fantastic car today and I am really pleased especially after last weekend that we could come here and take the win.”

Lucas Di Grassi was less happy as he stood on the podium.

“The crash today was the strongest Formula E crash of my career, one of the strongest crashes I have had in motorsport – it was well over 15g. I am fully bruised, my neck, my hands, my legs – but I’m okay,” he said. “I am happy with the points, but unhappy the car is in complete pieces and that the mechanics will have to work hard to put the car together tomorrow.”

Robin Frijns came off the worst in the decision to call off the race, being the leading driver not to crash. However, he didn’t rue his competition, saying only: “The two guys in front, Nick and Lucas, they went straight in turn 6, they spun basically – I don’t know what happened behind me but I was the only one who survived the carnage.” 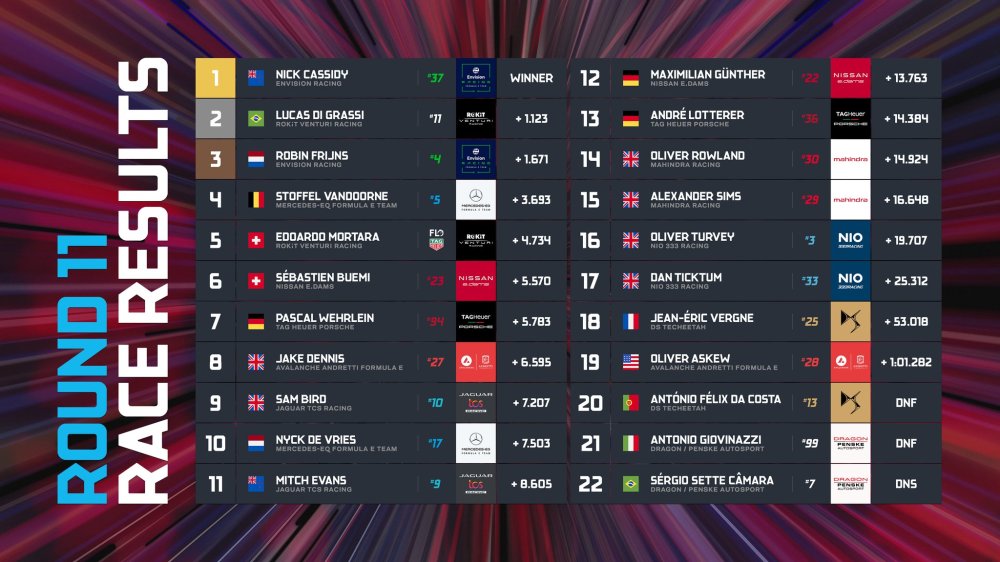 Formula E returns for the second round of the New York E-Prix on Sunday.