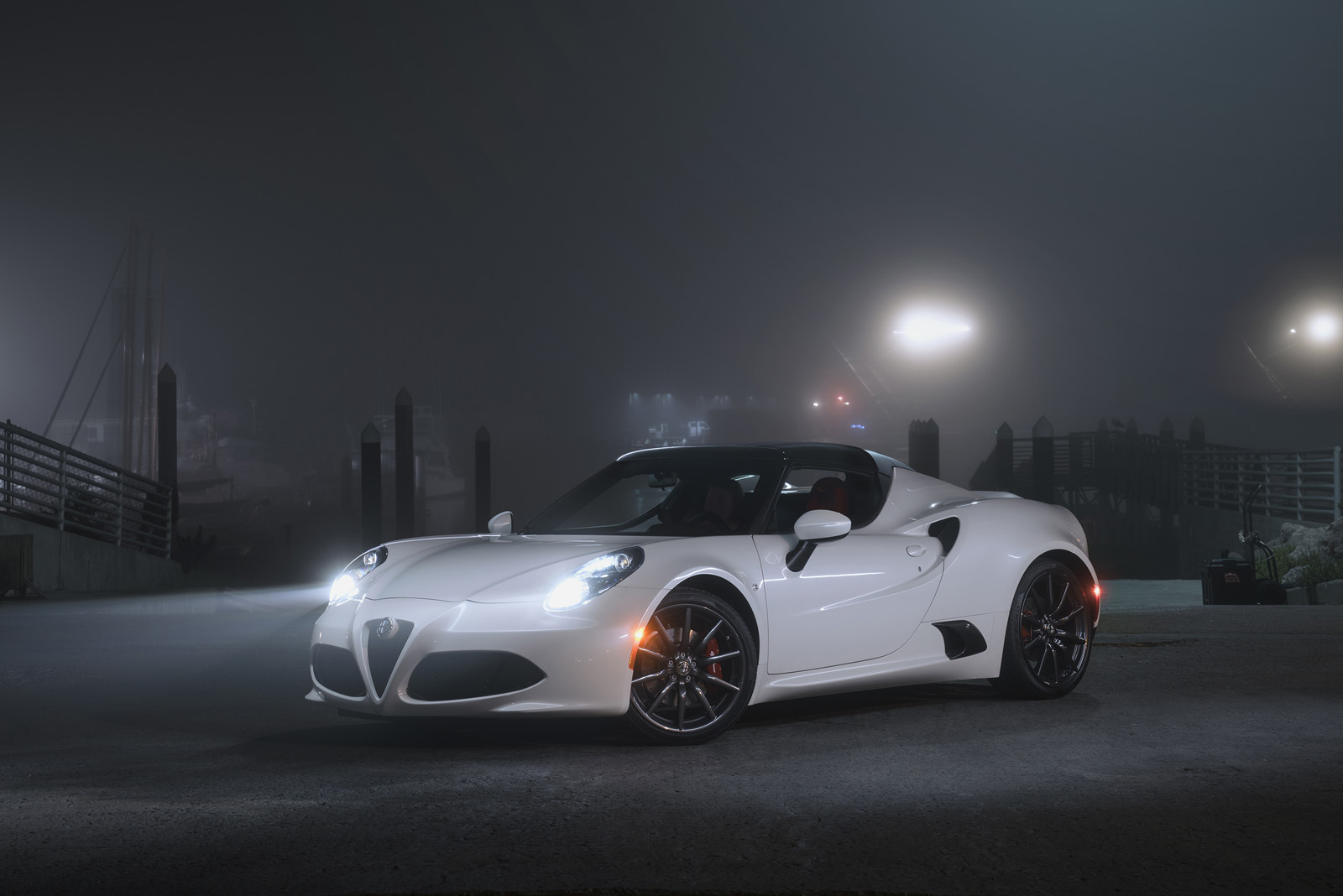 When I take a rare week off, a vacation, I will tune out the rest of the world. The Second Coming of Jesus could happen and I would never know it until I was sent to Hell with the rest of the condemned souls.  Instead I will be on a tropical beach somewhere lubed by copious amounts of alcohol and aching from a sunburn.  On vacation I want to do nothing more than fun stuff and be left with a week of pleasant memories.

I went on vacation recently thanks to my friends from Alfa-Romeo.  While there was no alcohol involved I did catch a bit of a sunburn.

When you are a car reviewer you get a different car each week; most are good, some are not, but one week will run into another.  An SUV this week, crossover the next, oh there’s a hybrid, a luxury sports sedan, a plain coupe, a pickup truck, which by the way delights my wife who saves a list of chores that need doing that only a pickup can do. Sure, some stand out more than others, most do not. A recent week with a Mercedes E400 stood out, the following one with the new Sonata not so much. In the end it’s an endless parade of machines that can be fit into a formulaic article; this one’s good because, this one’s bad because.

When told Alfa-Romeo was sending me a 2018 4C for a week I knew I was in for something special. Pack up the bags (just make them small) honey, we are heading on vacation.

I’ve had the 4C before, so knew it was special.  The 2015 I had a few years ago left me breathless, wanting more, and I absolutely loved it.

That was the coupe; this go around was the Spider.  While the 2015, in red, looked great, the 2018 in pearl white, looked like an automotive angel.  And unlike the 2015, the Spider allows you to go topless.

Now, normally having the top down in Florida is suicide; the only time you see someone tooling around with the top down are tourists in rental Mustangs.  They go home wondering how the hell their head got so sunburned.  Those of us who live here know better than that. Driving with a top down in August leaves you sweaty, dehydrated, and in need of Aloe Vera on your blistered head. Going topless in Florida is usually best reserved for the beaches in Miami, where it’s actually commonplace.

There are those few days however when the weather is perfect for topless driving; low humidity, temps in the 70s, low 80s and an Autumn sun that isn’t blazing directly overhead.

This was precisely the week I had with the Spider.

Looking at the 4C as a car, it should be something that shouldn’t be liked. No adjustable passenger seat, driver’s seat can only move forward and back, the only storage the size of a small cooler and that’s behind the engine; the front hood doesn’t even open.  So you can’t carry groceries, or more than one passenger, there’s no touch screen, satellite navigation, fancy doo-dads, collision avoidance, blind spot, rear view camera, lane keeping assist, no none of that.  It’s not easy to get in, or out of, and there’s not even any power steering.

But none of that matters. Because at the end of the day, this is the worst car you’ll ever love.

The 1.7 liter inline 4 delivering 237 horses combined with 258-pound feet of torque slings the 2487 (18 more than the coupe) pounds curb weight 4C around like a naughty little boy who has unlimited energy and only does what he’s told to part of the time. A 10.4 power-to-weight ratio is normally reserved for pure racecars.

And with the top rolled off and put in the back, taking up the only available storage, the 4C is pure driving Nirvana, a naughty little boy you want to adopt as soon as you can. 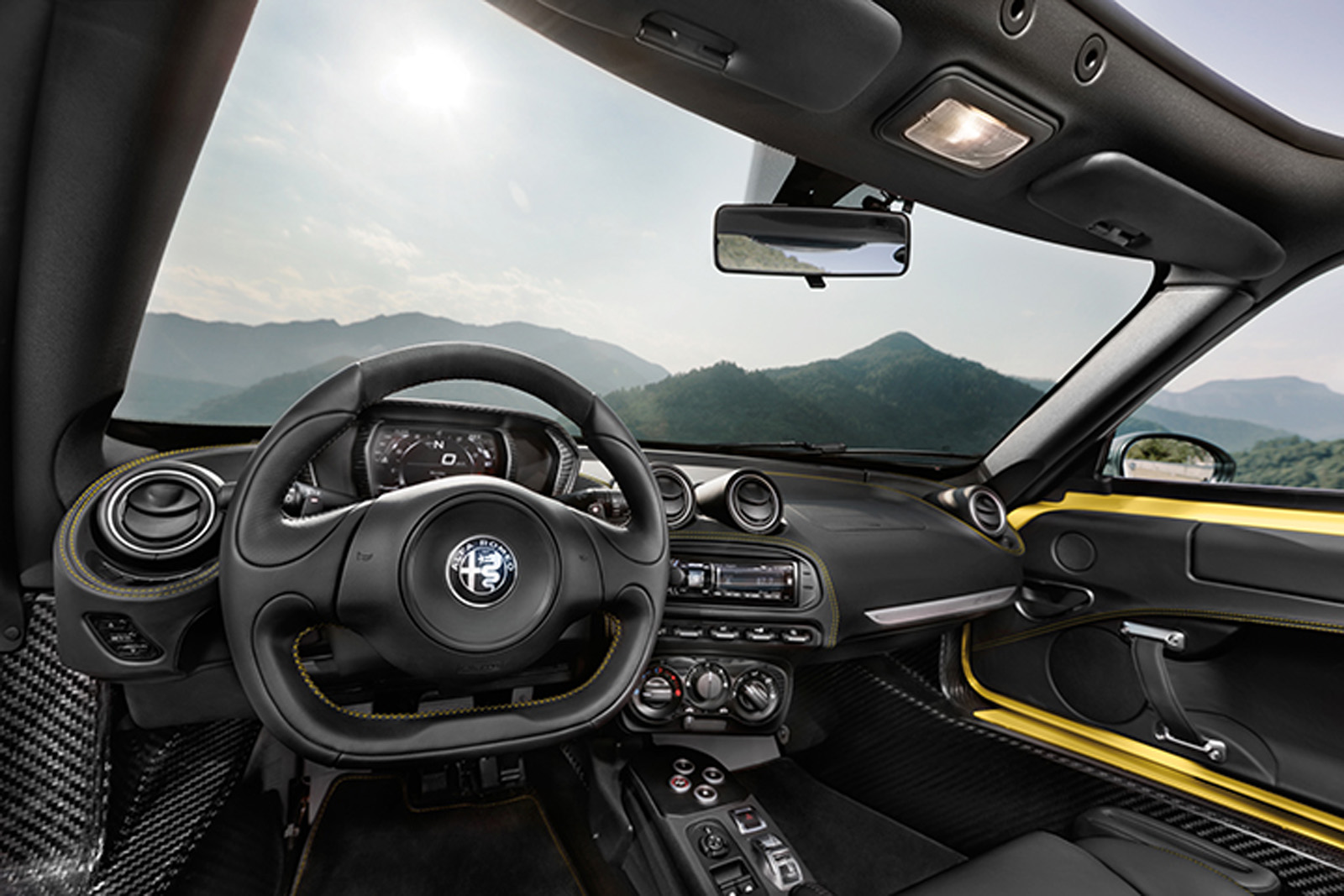 The 4C’s strength is in the driving experience. On the road every pebble is felt, every curve looked forward to with a smile. The snarling beast will belch, and fart like an old man; it sounds like a lion wanting to mate. And it must be tended to every single moment you are moving. There’s no checking your phone, changing the radio station, or even having a normal conversation for that matter.

The latest version has a new front fascia with carbon fiber vents, and my tester for the week was the top of the line fitted with Track package that gives race tuned suspension, shocks, and struts. I also had the Akrapovic dual-mode exhaust system with the center mounted exhaust tips framed by carbon fiber.

Surrounded by carbon fiber in the cockpit, it’s a single molded design by the way, you know it’s something unlike most others on the road. In fact, few of us ever get to experience anything like what the 4C has to offer unless you race cars for a living, or can afford a true supercar.

As for the sheer beauty of this thing, that’s also something rarely seen on the road. So much so that anyone who does not want to attract attention needs to stay away from the 4C.  During my week I found all manner of excuses to drive; an evening out to dinner to the Ace Café in Orlando led to two full hours of conversations and questions answered in the parking lot, not to mention a premier parking spot in front of the building. On the road, phones will be taking pictures, heads will be turned, and conversations started. It’s also not something that can fly under the radar of speed traps; although it can nearly fly. One admirer said the 4C looked like a “speeding ticket at idle.”

The “Dynamic” and “Race” modes of the DNA selector (Natural and All-Weather are the other two), are also pretty much useless for daily driving.  Dynamic and Race open the Akrapovic dual-mode exhaust up making it even louder.  As it stands the Natural mode will still get you 0-60 in around 4 seconds, and the twin-clutch transmission, with a little practice, will make you forget that the 4C isn’t offered in a manual.  Paddle shifters are there if you need them, but the clutch and shifting works well enough on its own that the only time those should be needed is on a track.

But let’s face it, the 4C would not make a good daily driver. It’s the type of car that belongs under wraps, saved for those special days of good weather, or a day at the track.

For a week though I was on vacation, escaping the real world in a car I could never keep, one that again left me breathless and wanting more. And when it was over I was left with a sunburn, and many pleasant memories. 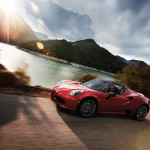 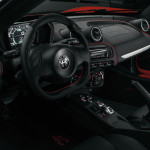 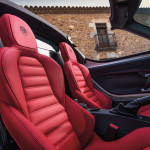 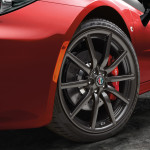 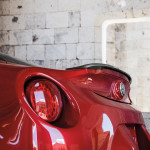 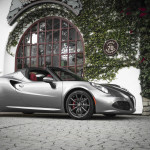 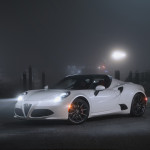 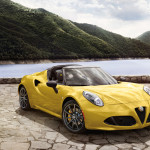 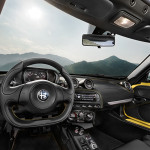 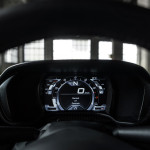 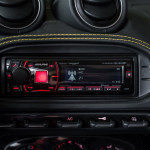 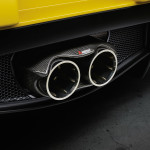 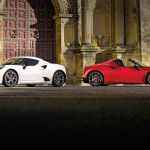 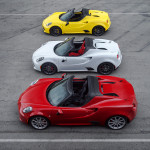 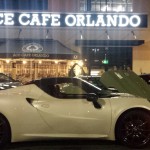 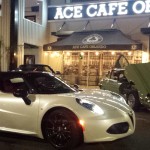