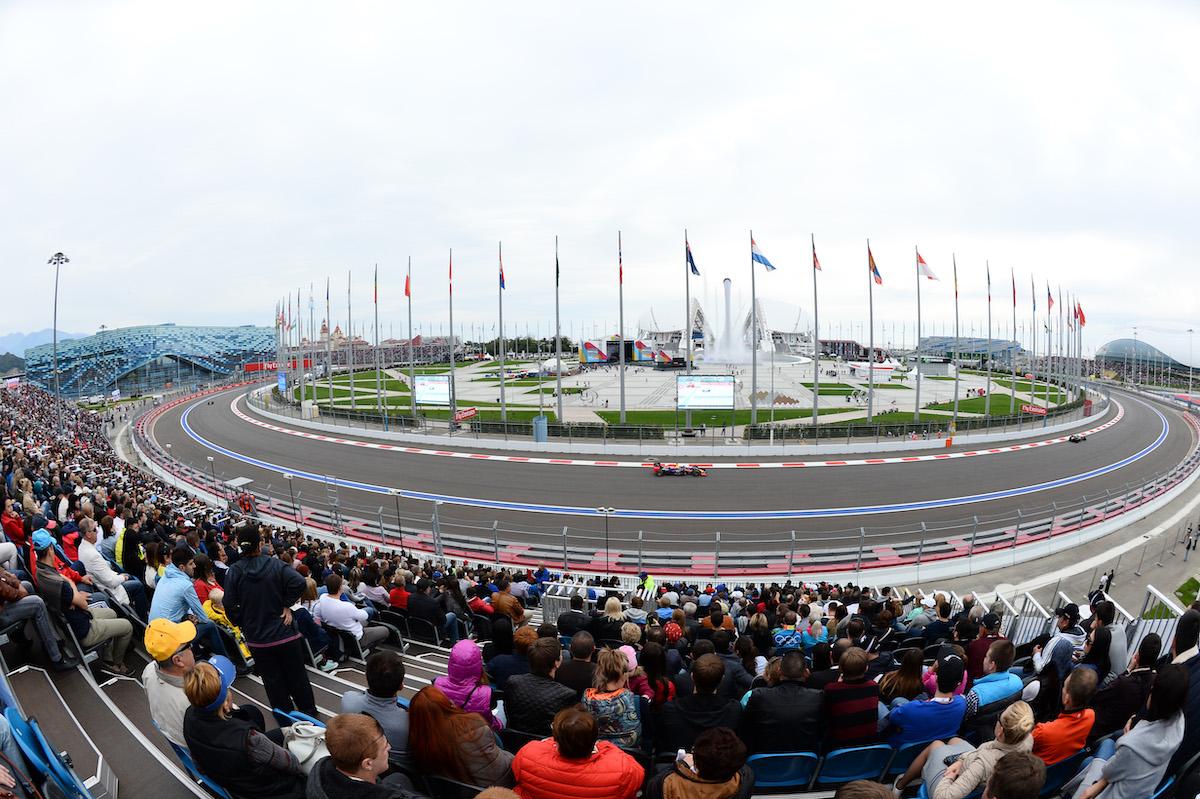 Formula 1 will not race in Russia later this year but seemed to have left the door open should things change. And shortly after the announcement, the promoter of the race in Russia also indicate that a full cancellation hasn’t happened just yet, urging ticket holders not to seek refunds.

The news comes a day after Russia invaded Ukraine after building tensions in the last several weeks; the move caused an uproar around the world. Teams are in Barcelona conducting preseason testing and drivers and teams reacted swiftly to the news.

Four-time World Champion Sebastian Vettel said he wouldn’t be racing at the event which was on the schedule for September 23-25.

“In my personal opinion, I woke up to this morning’s news, shocked,” Vettel said. “I think it’s horrible to see what is happening. Obviously if you look at the calendar, we have a race scheduled in Russia. For myself, my own opinion is I should not go, I will not go. I think it’s wrong to race in the country.

“I’m sorry for the people, innocent people that are losing their lives, that are getting killed for stupid reasons and a very, very strange and mad leadership. I’m sure it’s something that we will talk about, but personally I’m just so shocked and sad to see what is going on.

“So, we will see going forward, but I think my decision is already made.”

“When a country is at war, it’s not right to run there, that’s for sure,” Verstappen said. “But what matters is not what I think, it’s the whole paddock that will decide.”

Thursday evening American F1 team Haas announced that it would be completing the final day of F1 testing in Barcelona without any Uralkali sponsorship or colors, which resemble the Russian flag. The company is based in Russia and is owned in part by Dmitry Mazepin. His son Nikita Mazepin races for Haas and the moves leave the future of the sponsorship in question. 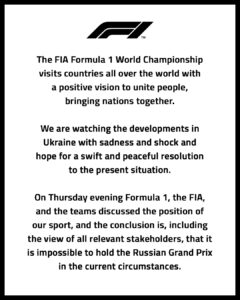 Haas team principal Gunther Steiner spoke to the media early Friday before Mazepin took only a few laps in the morning test session before retiring; the teams second driver Mick Schumacher was scheduled to test in the afternoon.

Steiner said the team would go through the legal ramifications of removing the sponsors livery from the car next week.

“We removed it yesterday, we have to sort out all the legal stuff, which I cannot speak about, next week,” Steiner said. “At the moment, I said we’re not going to do it today. We made the decision yesterday with our team partners. This is what we’re going to do. I need to work on the rest next week.”

Friday’s statement from F1 seems to leave the possibility of putting the race back on the schedule open.

“The FIA Formula 1 World Championship visits countries all over the world with a positive vision to unite people, bringing nations together.

We are watching the developments in Ukraine with sadness and shock and hope for a swift and peaceful resolution to the present situation.

On Thursday evening Formula 1, the FIA, and the teams discussed the position of our sport, and the conclusion is, including the view of all relevant stakeholders, that it is impossible to hold the Russian Grand Prix in the current circumstances.”

The Russian race promoter, Rosgonki, confirmed the contract to hold the race has been suspended. But in a statement they instructed fans not to seek refunds for tickets as “it is still possible that the round will take place and will be held as previously scheduled” despite F1’s statement.

“According to the official statement released by Formula 1 on 25/02/2022, due to the current political situation in the world, the FIA has decided to suspend preparations for the Formula 1 World Championship round in Russia previously scheduled to be held in Sochi in September 2022 because it is impossible to hold it in the current circumstances,” the statement reads.

“The agreement between the official Russian Grand Prix promoter ANO ‘ROSGONKI’ and FORMULA 1 is suspended due to force majeure events.

“The purchased tickets are not cancelled – there is no need to get refunds for them now because it is still possible that the round will take place and will be held as previously scheduled.

“ANO ‘ROSGONKI’ continues its business as usual providing services to the Sochi Autodrom guests, as well as organising and holding motorsport and other events of the federal, regional and municipal level as part of the event calendar approved.”