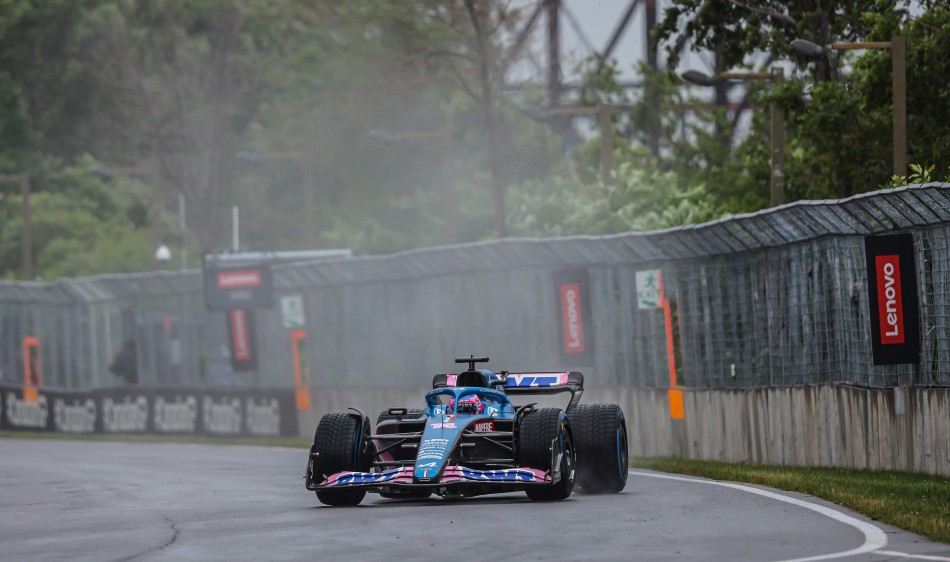 Red Bull Racings Max Verstappen claimed his first pole position of 2022 since Imola Saturday, but it was Alpine’s Fernando Alonso who stunned the field grabbing second spot and a front row starting spot for Sunday.

The session started in wet conditions at the Circuit Gilles Villeneuve with the field tentative at first. But as the track slowly dried speeds picked up.

Ferrari’s Carlos Sainz will start third while his teammate Charles Leclerc will start P19 after taking on new power unit elements. Lewis Hamilton showed his wet weather ability to take P4, ahead of a nice performance for the Haas drivers Kevin Magnussen and Mick Schumacher, sharing the third row in P5 and P6.

Esteban Ocon grabbed P7 ahead of the second Mercedes of George Russell – whose attempt to set a lap on slicks in the closing stages ended in disaster as he spun at Turn 2 – with Daniel Ricciardo leading Zhou Guanyu. The Chinese driver was making his first ever Q3 appearance but will be investigated after the session for an infringement at Turn 14.

Valtteri Bottas was 11th, ahead of the Williams of Alex Albon, then Sergio Perez – who crashed his Red Bull out of Q2, bringing out red flags – ahead of Lando Norris, the Briton experiencing a power unit issue.

Leclerc was P15, but will fall back with his penalty, promoting Pierre Gasly, Sebastian Vettel, Lance Stroll and Nicholas Latifi, who all dropped out in Q1.

Yuki Tsunoda will bring up the rear of the field, having also taken engine penalties for power unit changes.

“Of course, I still expect it not to be a straightforward race,” said Verstappen. “But I think today with the tricky conditions we stayed calm, we didn’t make mistakes and we had the right calls in Q3, of course super happy with that to get pole position here. Also, to be back here in Montreal, it’s been a while and it’s great to see all the fans.

Alonso meanwhile drew cheers from the Canadian crowd after he climbed from this car as the start-finish line.

“It’s an amazing result for us to take second place today, so I’m feeling very pleased,” the 41-year-old said. “It was impossible to know the grip levels on each lap in those conditions and that made it even more challenging.

“In the end, I think it’s a little bit unexpected to be on the front row, but it will be very nice to line-up there tomorrow. Let’s see if we can fight with Max [Verstappen] into turn one, though, that said, aiming to score strong points will be our main goal. The team deserves a big congratulations as they have been working flat out on updates and this is an example of this. It’ll be a long race in different conditions again, but I’m confident, so let’s see what we can do on the day.”