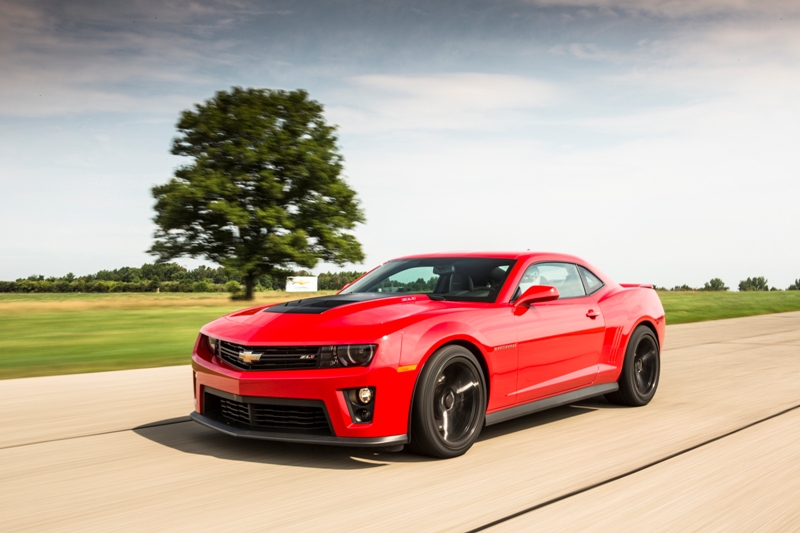 DETROIT – General Motors will recall all current generation Chevrolet Camaros because a driver’s knee can bump the key FOB and cause the key to inadvertently move out of the “run” position, with a corresponding reduction or loss of power.

The issue, which may primarily affect drivers sitting close to the steering column, was discovered by GM during internal testing following the ignition switch recall earlier this year.

“Discovering and acting on this issue quickly is an example of the new norm for product safety at GM,” said Jeff Boyer, vice president of GM Global Safety.

GM is aware of three crashes that resulted in four minor injuries that it believes may be attributed to this condition.

The company will change the Camaro key to a standard design from one in which the key is concealed in the FOB and is opened by pushing a button. The change will make the ignition key and FOB independent of each other, so that inadvertent contact with the FOB won’t move the key from the “run” position. There are 464,712 Camaros from the 2010-2014 model years in the U.S. included in the recall. Including Canada, Mexico and exports, the total recall population is 511,528.

Separately, GM also announced two safety recalls and one non-compliance recall involving a total of 65,121 cars in the U.S. all three of which were reported to the NHTSA on Wednesday, June 11, 2014. Including Canada, Mexico and exports, the total recall population is 69,839.

In all cases, customers will receive letters from GM letting them know when they can bring their vehicles into a dealership, where the recall repairs will be performed free of charge and courtesy transportation would be provided as needed.

28,789 Saab 9-3 convertibles from the 2004-2011 model years for an automatic tensioning system cable in the driver’s side front seat belt retractor that could break. If the cable were to break, seat belt webbing spooled out by the driver would not retract. The convertibles and sedans were investigated at the same time, but the convertible parts were not identical to the sedan parts. GM has since learned of customer complaints to the NHTSA for the convertibles. Dealers will replace the driver’s side retractor in the recalled vehicles. In addition, GM has issued a special coverage, so that if the same repair is required to the passenger side retractor it will be covered for the life of the vehicle. GM also extended the special coverage for passenger side belt retractors on the 2004 Saab 9-3 sedan from the original 10-year coverage to the life of the vehicle, like the convertibles. GM is unaware of any crashes, injuries or fatalities due to this condition.

21,567 Chevrolet Sonic 2012 model year compacts equipped with a six-speed automatic transmission and a 1.8-liter four-cylinder engine for a condition in which the transmission turbine shaft may fracture as a result of a supplier quality issue. If this were to occur in first or second gear, the vehicle could not upshift into third through sixth gears. If the turbine shift fractured while in one of the higher gears, the vehicle would coast until it was moving slow enough to downshift into first or second gear. In both instances, a malfunction indicator lamp may illuminate. If driven in this condition for a long period of time, all forward gears may become inoperable. The engine would continue to run and all power accessories would function. Dealers will replace the transmission turbine shaft. GM is unaware of any crashes, injuries or fatalities related to this condition.

14,765 model year 2014 Buick LaCrosse sedans because a wiring splice in the driver’s door may corrode and break. That may communicate incorrect information to circuits that control the door chime and allow passenger windows, rear windows and the sunroof to function when the vehicle is turned off and the driver is not in the vehicle. In addition, a chime will not sound when the driver’s door is opened if the key is in the ignition.

Dealers will inspect the driver door window motor harness and, if necessary, replace an electrical splice. GM is unaware of any thefts, crashes, injuries or fatalities related to this condition. 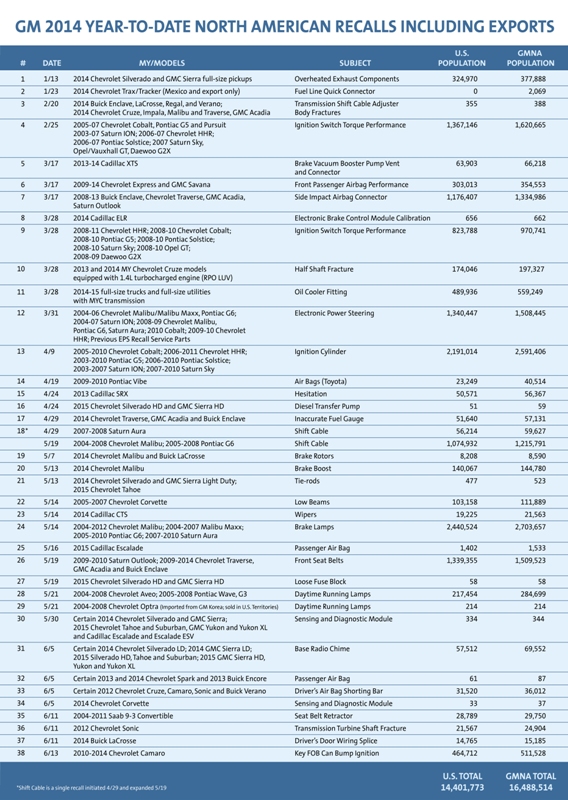