When I was a wee lad there was a popular prime time cartoon show called The Jetsons about a futuristic family. One memory from that was the flying car George, the father, had that he used to commute to Spacely Sprockets his day job; a job by the way he only worked at nine hours a week. When George got to work his flying car folded up into a briefcase he carried with him into the office.

As a child that show gave me unrealistic expectations of the future. I hoped for flying cars and nine-hour work weeks when I reached adulthood. Now that I’m fast approaching old age though, I’m sad at the fact that we don’t have flying cars, not even close in fact. I have found however, that there is a car with a futuristic look that George Jetson would approve of.

That car is the 2022 Infiniti QX55 sent me for a recent week. It’s a new luxury crossover with a very nice futuristic look that would look at home pulling up in front of Spacely Sprockets, despite that fact that it can’t fly.

The QX55 borrows heavily from Infiniti’s QX50 and counts among its rivals the Audi Q5 Sportback, BMW X4 and Mercedes-Benz GLC Coupe, not bad company to be in.

The QX55 is available in three trim levels: Luxe, Essential, and Sensory.

All-wheel drive is standard across the line up as is a turbocharged 268-horsepower four-cylinder engine along with LED headlights, and a power liftgate. The top of the line Sensory (like the tester I had for the week), adds a hands-free liftgate and premium leather upholstery to an already packed luxury ride that has a power-adjustable steering column, driver-seat memory settings, a heated steering wheel, ventilated front seats, 16-speaker Bose premium sound system, surround-view camera system, adaptive headlights, adaptive cruise control, blind-spot intervention, lane keeping system, and a Head-up display.

There is also the Infiniti standard dual touchscreen screen setup in the center console, am 8-inch on top for navigation, and 7-inch below for everything else. The exterior of the QX55 is certainly different then the QX50 I had just under a year ago. The boxy exterior of the QX50 is replaced with flowing lines and a sweptback look that gives the QX55 a more aggressive stance.

One thing that hasn’t changed all the much is the interior. It would be hard to distinguish the interior of the two apart. Both are nice places to be and very luxurious.

And while the inside is indeed a very nice place to be, on the road the QX55 suffers from the same thing I wasn’t too keen on with the QX50; the continuously variable automatic transmission (CVT). While the engine has plenty of power, sending that power to the road through the CVT seems to fall short. The sporty look doesn’t seem to match up to the actual performance. 0-60 in 6.5 seconds isn’t something to brag about. In automotive time 0-60 in that amount of time gives you a chance to take a nap, wake up fix dinner and have it waiting.

For the life of me I can’t understand the fascination some car makers have with the CVT. It makes me wonder if there isn’t a CVT mafia somewhere controlling it. Even though the manufacturers have upgraded the technology that allows the CVT the mimic shift points, they still can’t seem to get it right, and what we are left with is downright annoying, not to mention something that seems to lose a bit of the power from the engine to the road.

I’m sure if the were an 8-speed automatic in the QX55 the sport looks would be matched by the sporty experience on the road. As it is, the QX55 is a very nice-looking crossover and a very, very nice place to be. It just lacks that little bit on the road that would make it even better.

Now if we could just make it fly and fold up into a briefcase… but I guess that’s wishful thinking. 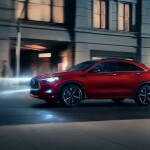 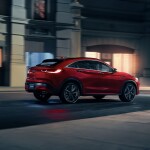