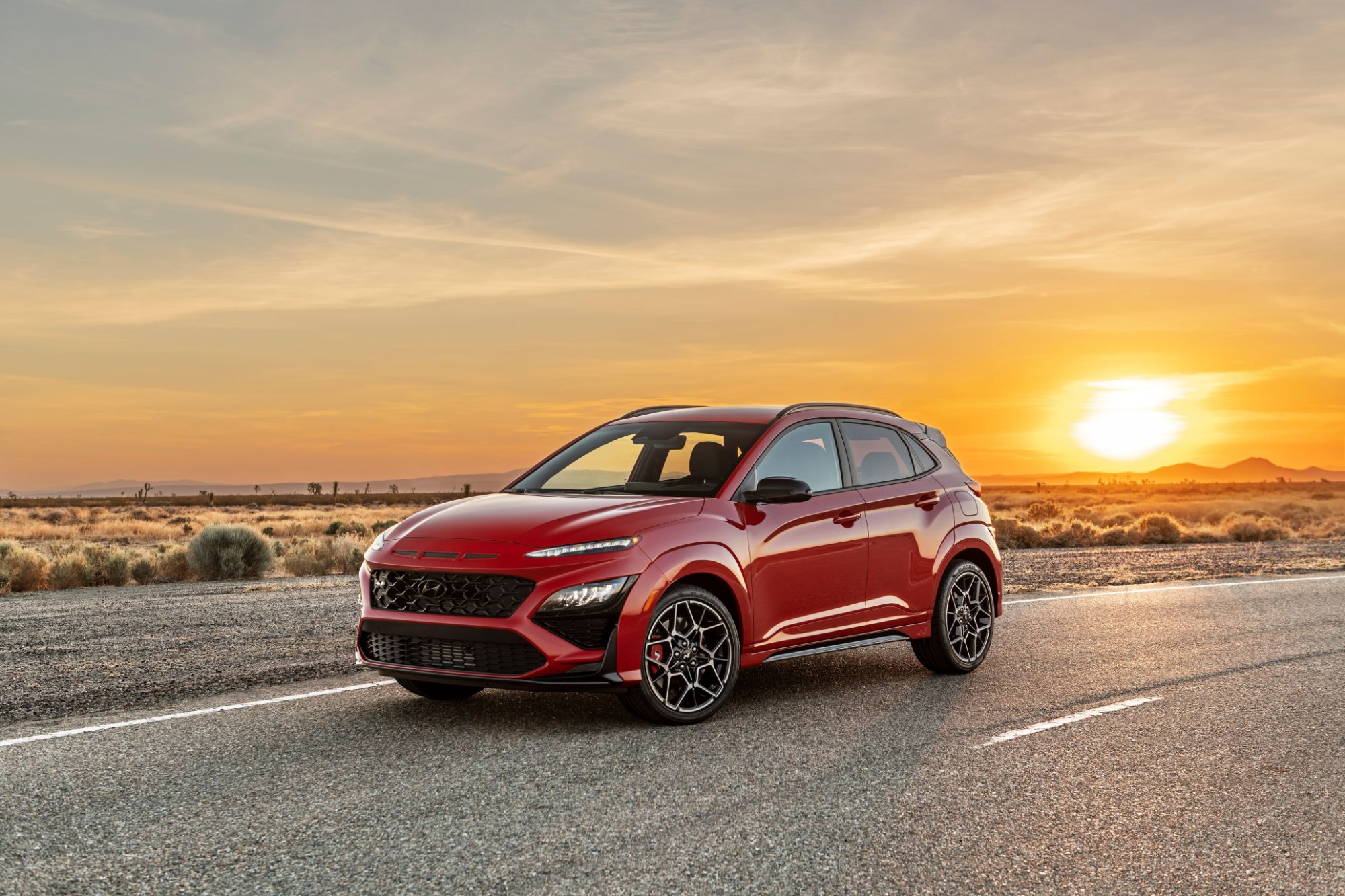 When last I spent a week behind the wheel of a Hyundai Kona it was a 2018. The small crossover had just been introduced to the market. I found it to be a cool little vehicle if a bit underwhelming.

Since then, I have to be honest I’d forgotten all about it. That was until a recent week when Hyundai delivered me a 2022 Kona. I figured it was going to be another underwhelming week with a cool little crossover.

But this 2022 wasn’t like the 2018 I had. No, no it wasn’t. While there have been only minor changes to the Kona since it was introduced, for 2022 they introduced a new variant to the lineup: The Kona N.

You see, there was a time when I had no idea what the “N” designation from Hyundai meant. That changed last year when I was sent a Veloster with the “N” attached to it.

I’ve always liked the Veloster, and after a week with the N model, I liked it a whole bunch more. The N model turned the Veloster into a super-sized speed demon.

The first time I saw the “N” designation, I thought perhaps those jokesters at Hyundai were taking a dig at Nissan’s “NISMO” badge. Turns out the N stands for Namyang, home to Hyundai Motor’s global R&D Centre in Korea since 1995 and for the Nürburgring, home to Hyundai Motor’s European Test Center, and according to the company the N also symbolizes a chicane. Clever, but I still think that somewhere along the way, there is a dig at Nissan. But I digress. Hyundai is big into the FIA World Rally Championship and anything with the N on it is aiming to build on the company’s motorsport experience.

On the Veloster there was a little red button on the bottom of the steering wheel marked “NGS” which stands for N Grin Shift. Turns out that pressing that button engages the sportiest mode available and overboosts the engine upping the 276-hp to 286 for 20 seconds. The first time I pushed down the pedal and hit the button it frankly scared the hell out of me. I rocketed by some poor mom in a minivan, and I suspect scared her as well. When I let off the gas the popping from the exhaust echoed and I understood what the “Grin” came from as I was smiling ear to ear.

Once I understood what that little red button could do, I of course used it cautiously. But it turned that Veloster into a whole new snarling beast.

The N sits at the top of the Kona lineup (SE, SEL, N Line, and Limited), and is nothing like the rest of the lineup. At first, I wondered what the difference was between the N Line and the N. Turns out the N Line is more of a sport-themed trim. In addition to what’s found in the rest of the lineup, like remote engine start, keyless entry and ignition, roof rails, tinted rear windows, HD and satellite radio, and safety features like a blind-spot monitor and rear cross-traffic alert, the N Line ditches the continuously variable automatic transmission in favor of a seven-speed dual-clutch automatic transmission. It also adds automatic climate control, a leather-wrapped steering wheel, heated front seats, and a wireless charging pad. 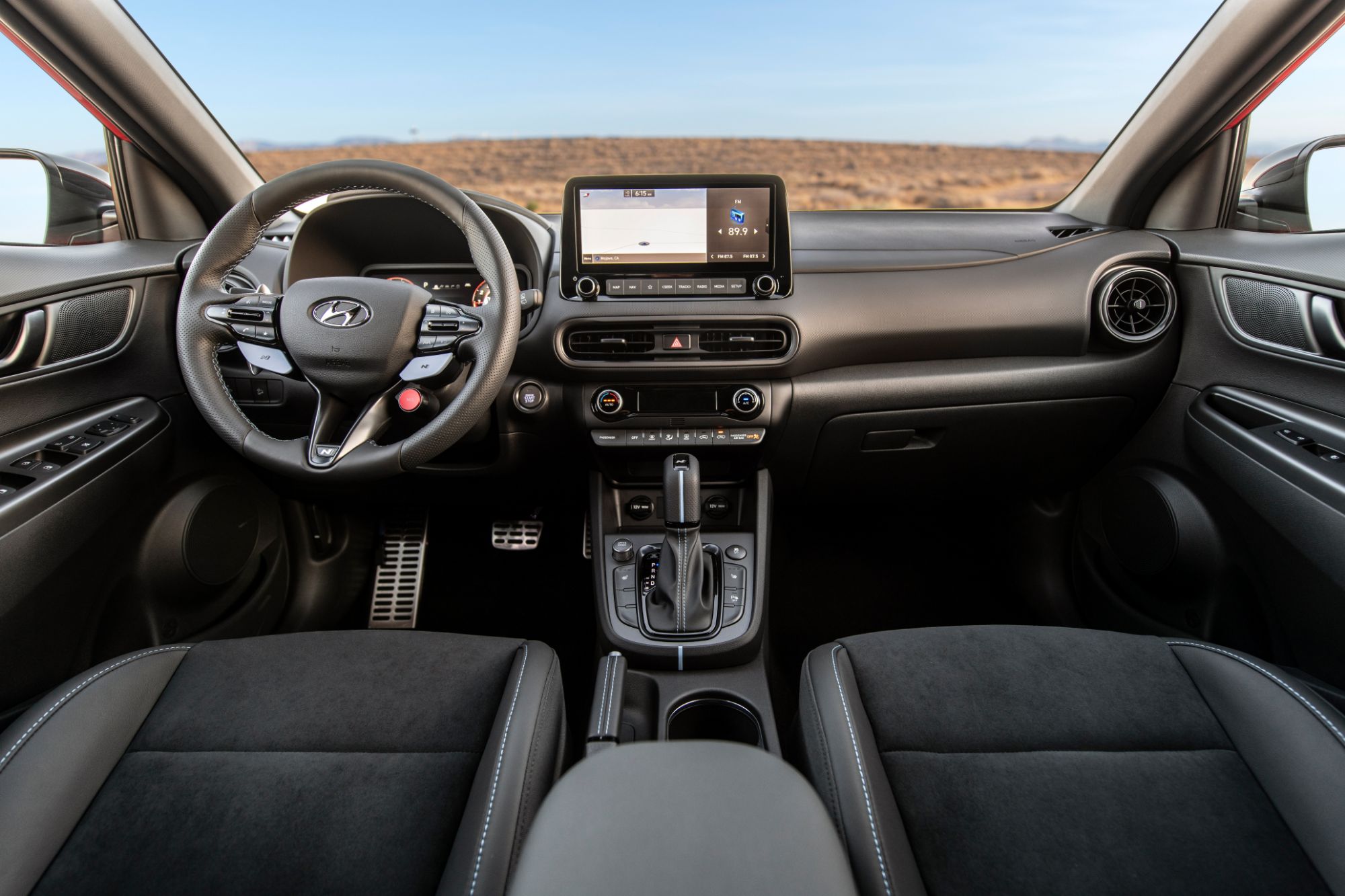 But the engine moves from a 2.0-liter four-cylinder 147 horsepower, and 132 lb-ft torque to a turbocharged 1.6-liter engine with 195 hp, and 195 lb-ft torque. There’s also 18-inch wheels (up from 17) and sporty styling for the bumpers and grill. You can also option in the Tech package with LED headlights and taillights, a sunroof, an eight-speaker Harman Kardon audio system, a 10.25-inch touchscreen, navigation system, wired-only Apple CarPlay and Android Auto compatibility and adaptive cruise control.

The N model gets a turbocharged 2.0-liter engine with 276 hp and 289 lb-ft torque with the aforementioned temporary boost to 286 hp.  There’s also a eight-speed dual-clutch automatic transmission 19-inch wheels, an electronic limited-slip differential, upgraded brakes, the variable sport exhaust, and an aero kit complete with a larger rear spoiler. And of course, selectable drive modes.

Inside the N gets the features found on the Limited model like automatic wipers, an auto-dimming rearview mirror, a power-adjustable driver’s seat with adjustable lumbar support, rear USB ports, adaptive cruise control, rear parking sensors, and leather upholstery. The N also gets suede inserts to go along with the leather, and sport seats with extra bolstering.

I couldn’t wait to get it on a lonely road and press that now-familiar red button. Like the Veloster, the Kona took off like a rocket from nearby Kennedy Space Center, snarling, popping, and roaring for all 26 seconds. Unlike the Veloster, this time I didn’t fly by a mom in a minivan leaving her wondering if she was about to meet Jesus. Because I knew what the “N” means, and that’s a whole lot of fun.

One of the best parts, to me, and like the Veloster, is the MSRP. The MSRP is $35,495, and since the N is already loaded with all the options all you need do is decide the color. All this fun for around $35,000? Yes please.

On a side note: When I got the Kona N on the first day, my adult daughter came home from work and charged into my office.

“Oh my god dad you have a Kona!” she exclaimed.

“Um, yeah,” I replied wondering what all the fuss was about.

Turns out she’s been shopping for a new car and the Kona N has been on the top of her list for a while. She’s doesn’t make the decision to buy a car without a great deal of thought and research, so I knew she had done her homework. She had only been waiting to actually see one “for reals” as the kids say. After taking her for a ride, I suspect that she will soon have the N in her driveway. Smart kid that one.

Maybe she’ll let me borrow it every once in a while. 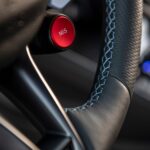 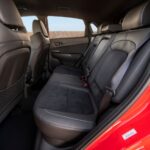 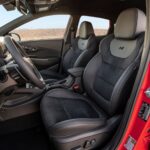 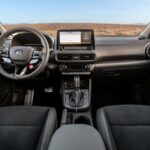 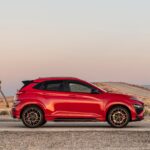 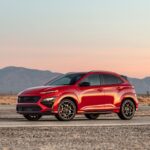 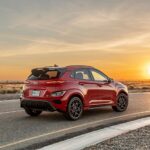 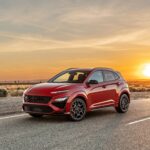 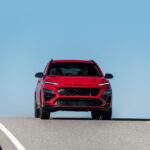 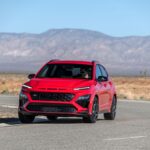 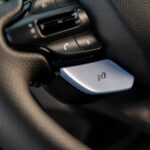 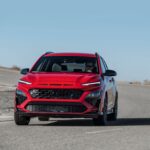 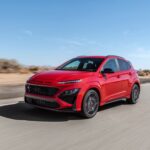 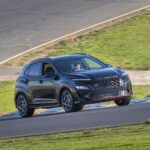 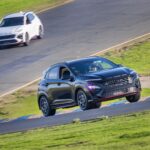 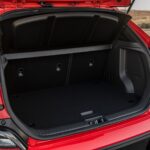