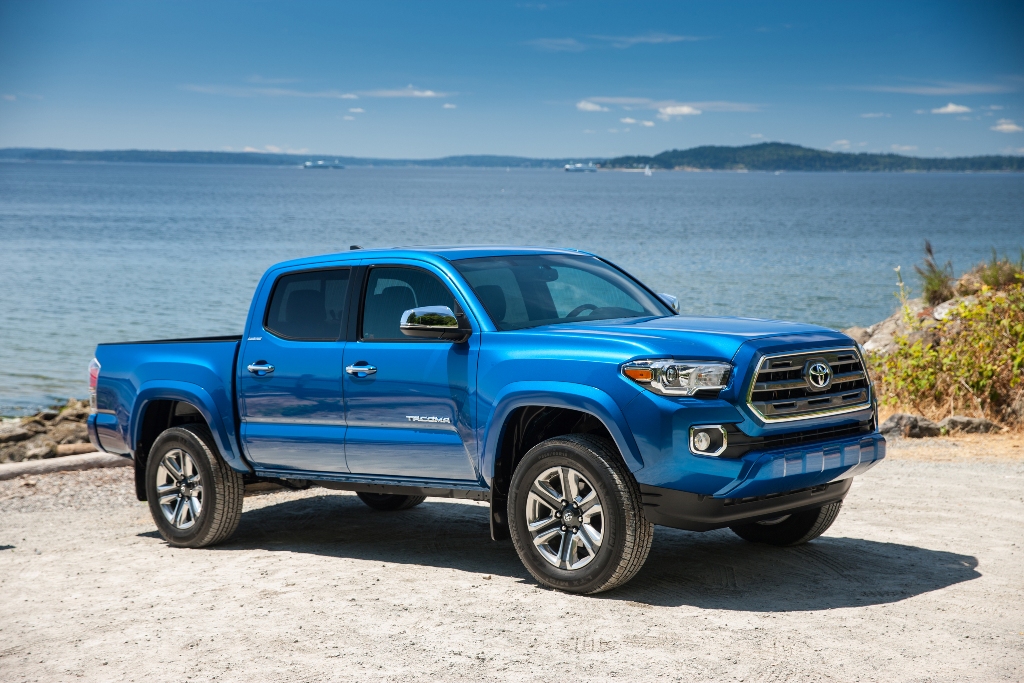 There is a trend in this country that is somewhat disturbing.  Young bearded men wearing skinny jeans, and plaid flannel shirts can be seem prowling hipster coffee shops ordering skinny lattes.  Most have tattoos and some even wear their hair in something called a “man-bun”.  Many of these elements, save the “man-bun”, once belonged to Alpha Males who led tribes, tamed wild lands and did many other manly things.  Beards were once grown to keep the face protected from the elements, flannel shirts worn only by lumberjacks and tattoos belonged to sailors who got them during a drunken shore leave.

Today’s young men try to look like men yet can actually do few manly things.  Ever chop down a tree? Start a campfire with two sticks? Hunt for your dinner? Drink black coffee? Most will say no to these questions, that is if one can actually get them to put down their smart phones and turn off Snap Chat long enough to answer.

It would seem then that the Alpha Male could someday be extinct.  Very few things reminiscent of the manly man can be found in today’s world.  Granted we don’t need to hunt for our food, nor are there many occasions when we actually need to tame a wild land or start a campfire with two sticks, but do we really need beard balm?

One vestige of manly men still exists; the pickup truck. You’ll never see a hipster behind the wheel of a pickup. No, only real manly men own pickup trucks, because owning a pickup makes you feel like a man.  There plenty to choose from on the market. Large and midsize most of the top automakers offer some sort of pickup including Toyota who offers a very nice midsize truck that we recently got to spend a week with.   Adding to the Tacoma’s manly legend,  they were actually used them in the US Army during Operation Enduring Freedom in Afghanistan. Sure the Middle Eastern version, the Hilux could be had in country, but buying the American version and modifying it was the way to go. More than one of these modified Tacoma’s could be seen in the past decade rolling off the ramp of a military aircraft ready to go to work with Special Operations forces around the world defending freedom.

The Toyota Tacoma, known as the Taco to aficionados, has been around since 1995. The second generation debuted in 2005 and many said it was time for an upgrade. Well, for 2016 Toyota heard the cries and has completely redesigned the Taco leaving some of the best features, while getting rid of some of old (like the tiny two door version). For 2016, the Tacoma remains a tough competitor with a plainness and straightforward capabilities that make it one of the most popular trucks in its class.  Last year it outsold the rest of its class, and for good reason.  The design combined with Toyota’s near legendry reliability, make the Tacoma a very good machine. And with the debut of this latest generation, there is no reason it won’t be a best seller for some time to come.

I have driven some of the others however, and truth be told perhaps owing to my bias during my time in the Army, the Tacoma remains my favorite.  The no-nonsense approach in both the design and features is spot on, and that story continues with the latest generation.

For 2016 the Tacoma is available with two cabs, either the extended Access Cab (with small rear-hinged back doors and four seats) and the Double Cab which is the larger crew cab with five seats. The Access Cab model has a 127.8-inch wheelbase and a 73.7-inch long bed. Double Cab models can be had with the short, 127.4-inch, or long, 141-inch, wheelbase versions. The Access Cab has a 60.5-inch short bed and the Double Cab has the long, 73.7 inch, bed. Rear-wheel drive is standard and four-wheel drive is optional.

Standard features on the SR include a cargo bed rail system with fixed and adjustable tie-downs, a bedliner,  and a sliding rear window. There are full power accessories, AC, a tilt-and-telescoping steering wheel with audio controls, a rearview camera, Bluetooth connectivity, voice controls, Siri Eyes Free (for Apple phones), and a 6.1-inch touchscreen interface with a six-speaker audio system with a CD player, a USB port and an auxiliary audio jack all sit atop 16-inch wheels.

With the SR5 upgrade, you get the Convenience package along with foglights, intermittent wipers, rear privacy glass, a color trip computer, leather-wrapped steering wheel with phone and audio controls, satellite radio and the Scout GPS Link navigation app. SR5 options include the Appearance package with sliver alloy wheels, auto-dimming rearview mirror. An expanded version of the Appearance package gives you rear parking sensors and an upgraded infotainment bundle with a 7-inch touchscreen, the Entune App Suite, HD radio and an integrated navigation system.

The TRD Sport will get you daytime running lights along with some exterior trim cues like a hood scoop and 17-inch wheels.  There are also some sport tuned tweaks to the suspension including the shocks, a wireless phone charger, along with interior changes including specially trimmed upholstery. The options here include the Premium and Technology package that adds automatic headlights, dual-zone climate control, heated front seats, rear parking sensors and a blind-spot monitor with rear cross-traffic alert. You can also get an upgraded JBL stereo with a subwoofer.

The TRD Off Road which has the TRD Sports exterior minus the hood scoop, is also fitted with Bilstein shock absorbers and other off road niceties like an electronic locking rear differential, and the Crawl Control system, which is a low speed cruise control used off-road.

My model for the week was the top of the line Limited.  The Limited can only be had with the Double Cab and has unique exterior and interior trim, leather upholstery and the contents of TRD Sport and Off Road’s optional Premium and Technology package. The Limited is sit atop 18-inch allow wheels.  My model also had the very nice, optional on all models, hard lockable tonneau cover, which prevented me from re-living my Army days by mounting an M-60 machine gun in the bed much, to the delight of commuters in Orlando during our week I suspect.

The 2016 Toyota Tacoma is powered by either a 2.7-liter four-cylinder engine (SR and SR5 only) delivering 159 horsepower and 180 lb-ft of torque or a 3.5 liter V6 with 236 horsepower and 266 lb-ft torque. Both rear-wheel-drive (4×2) and four-wheel-drive (4×4) configurations are available. All 4×2 Tacoma’s get a six-speed automatic transmission, while 4x4s can be had with the automatic or one of two manual transmissions, a five speed for the four-cylinder, or six for the V6.

My Limited model had a firm, but very comfortable ride, thanks to the 18-inch tires and road-tuned suspension.  A minor issue was the lack of real lumbar support, but that would not prevent us from plunking down the green to put one in our driveway. And although others have complained about a lack of power, our 3.5 liter powerplant was more than adequate and we were left with no doubt that there would be little that could not be done with the Tacoma. We didn’t get a chance to go off road, sadly.  But with the turn of the 4W Demand knob that puts the Limited into 4-wheel drive mode and a highest in its class 9.4 inches of ground clearance (along with our previous military experience) we were left little doubt that the Tacoma can go anywhere a driver needs it to go.

You may never find a young bearded hipster pulling up to a coffee shop in a Tacoma, but few civilian vehicles have earned a CIB (Combat Infantry Badge) and if the Tacoma is good enough for the US Army, it should be good enough for manly men everywhere.  If you are looking for a good midsize pickup, it should be Taco Tuesday every day of the year at your house, just leave the beard balm on the store shelves where it belongs. 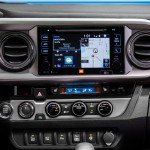 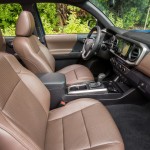 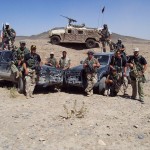 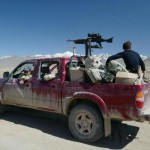 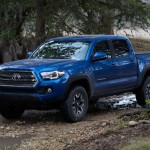 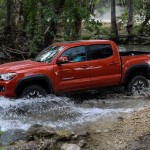 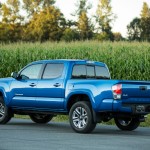 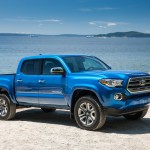 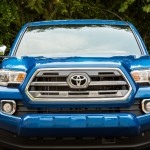 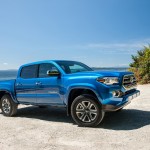 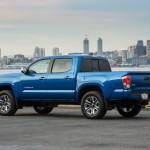 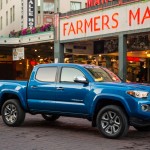 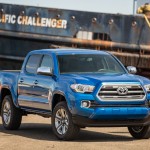 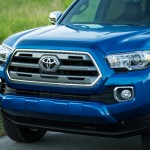 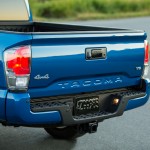 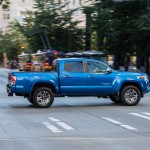 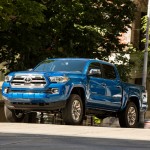 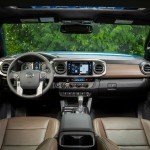