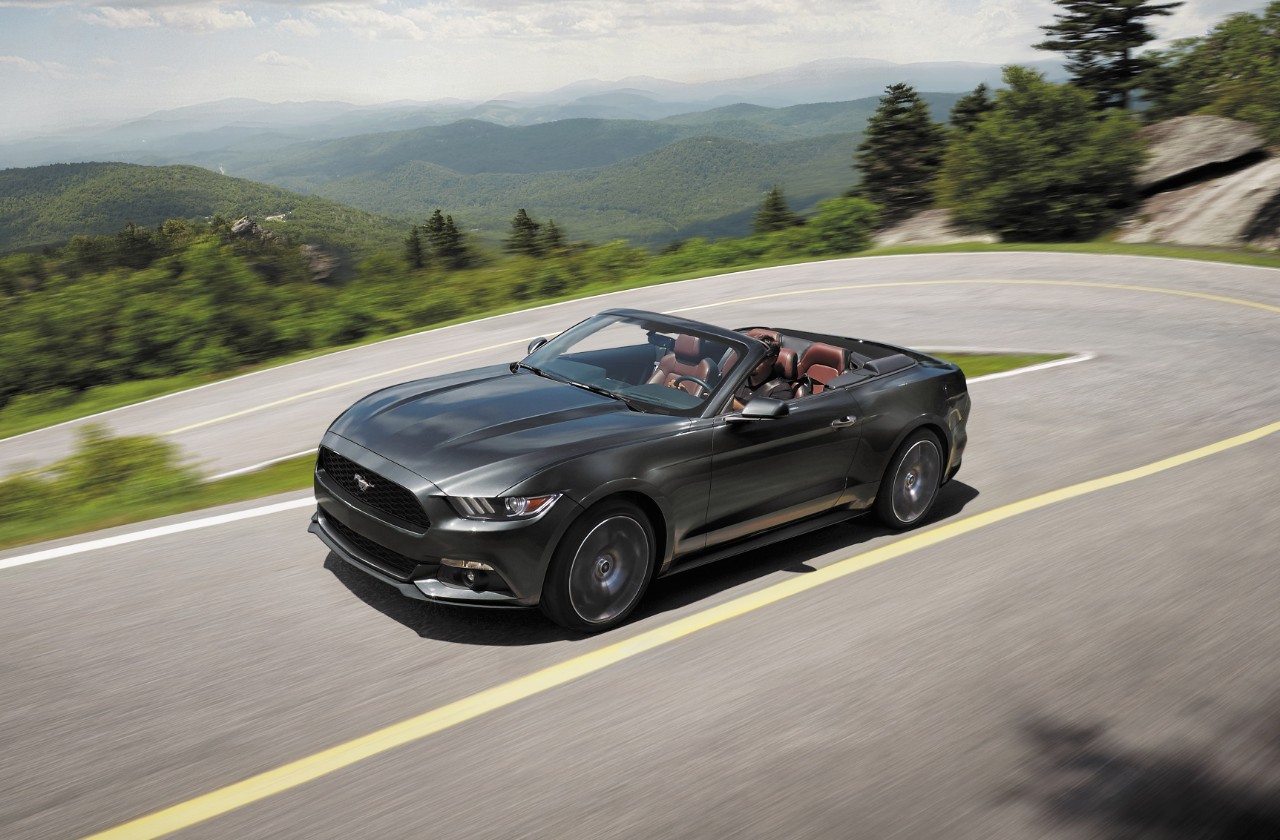 Ford has been very, very good to me. In the last few years they have delivered to me such goodness as the Focus RS, Fiesta ST, Escape and the Explorer. While those were one-off tests, in the past three years Ford has also delivered to me one of my favorite all-time cars, the Mustang.  I had the 2015 model, then the 2016, and recently, now the 2017 model.  And for the first time my Mustang could go topless.  The last two years it was the coupe, this go around it was the convertible and that made an already good car even better.

The 2017 Mustang comes in a coupe or a soft-top convertible. There are five trim levels: V6, EcoBoost, EcoBoost Premium, GT and GT Premium.

Most of the model changes came in 2016 and were mainly electronic. The Mustang’s optional MyFord Touch infotainment system as dropped for the Sync 3 system with a simpler interface. The EcoBoost and GT coupes added the available black-painted roof. The GT Performance could get the convertible as well as the coupe version, and all GT models got standard secondary turn signals that are integrated into the hood vents. Newly offered bundles in 2016 included the Black Accent and California Special packages (GT) and the Pony package (EcoBoost).

For 2017 the additions include color choices Grabber Blue, Lightning Blue, and White Platinum which replaces Kona Blue, Guard, Deep Impact Blue, and Competition Orange. Ruby Red Metallic has been added to the GT350’s exterior color options. Sync 3 now comes with Android Auto and Apple CarPlay integration. All 2017 Mustang GT350s now come standard with the Track package, with an aluminum tower-to-tower brace, a high-downforce rear spoiler, coolers for the engine oil, transmission and differential, and the MagneRide damping system. A new Electronics package for the GT350 adds navigation and a nine-speaker sound system while the Convenience package adds power-adjustable leather sports seats instead of the standard Recaro bucket seats.

As options, you can step up the 17-inch alloy wheels to 18s, add a rear spoiler, a six-way power driver’s seat, and LED foglights. 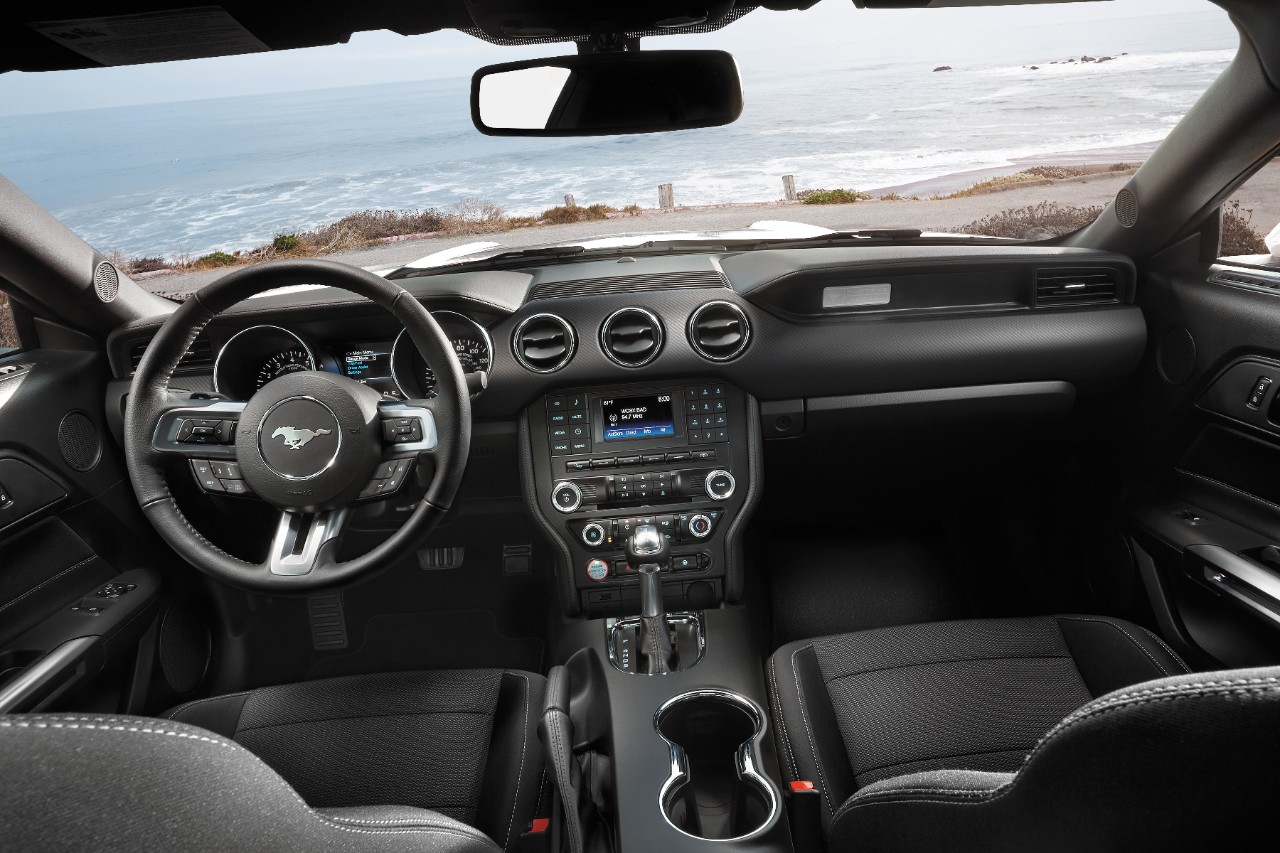 The top of the line GT has the biggest engine, a V8, in the lineup and the list of features mirror those of the EcoBoost trim except for upgraded brakes and electronic line lock. The manual transmission variant has launch control. The optional GT performance package differs with Brembo front brakes, and a Torsen limited-slip differential.  There is also the Black accent package with 19-inch black alloy wheels, blackout badges, and a black rear spoiler.

My tester for the week was the convertible EcoBoost Premium.  While some other reviewers complained of turbo lag, unless you are an honest to goodness racer needing to get a hole shot, it’s really not noticeable. Putting the top down is a relatively easy and effortless affair requiring only a turn of the locking handle and a push of a button.

The interior is still the nice retro looking, welcome to the muscle car world, let’s have some fun today shall we, that carries over from the Ponies of old.

On the road, there seemed to be no real difference in body flex with the convertible as opposed to the coupe. The Mustang can still power aggressively around corners and rocket off the line in Track mode. For everyday driving the rear view is still a bit restricted, as it is with all Mustangs, but with blind spot monitoring and bit of due diligence on the driver’s part, it really isn’t an issue.

While there is something to be said for having the wind blow through your hair while wheeling around town in an iconic muscle car, if I had a choice, it would be the coupe.  Make no mistake however, if I had a Mustang, convertible or not, I would be a happy camper. I still miss the throaty noise of a big V8, but the EcoBoost delivers all the fun the Mustang is known for and is a lot less dangerous than a big V8 in the wrong hands.  Truth be told however, I wish Ford would let me get behind the wheel of a GT or Shelby for a week just to see how dangerous it would really be.

Ford will refresh the Mustang for 2018. The V6 will be gone and there will be some design changes. Let’s hope it isn’t too long before the 2018 is sent to me for another glorious week with a Mustang. 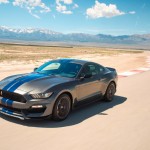 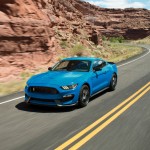 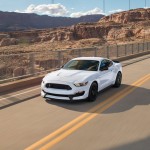 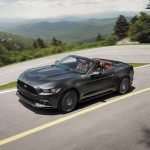 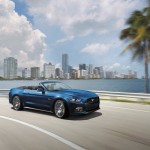 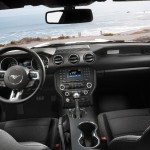 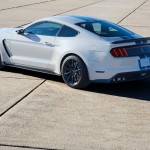