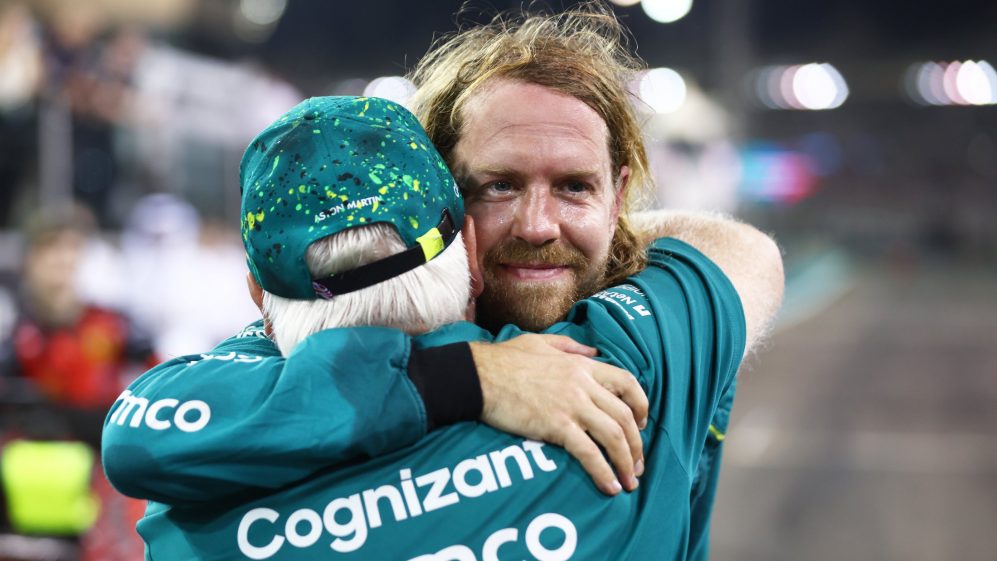 Sebastian Vettel hugs his dad Norbert after finishing his final F1 race as a fulltime driver in Abu Dhabi Sunday.

Sebastian Vettel bid a fond auf wiedersehen to fulltime F1 racing Sunday after a week spent celebrating his 15 years in the sport.

Along the way the German scored 35 wins, 122 podiums and 4 world driving championship titles most of those coming with teams Red Bull Racing and Ferrari. In his final 2 seasons however, he raced for Aston Martin earning just 1 podium that coming at Baku in 2021.

Vettel announced his retirement this past July and leaves the sport third on the all-time winners list behind Lewis Hamilton and Michael Schumacher.

It was Hamilton who arranged a dinner with all the drivers in the week leading up to the final race in Abu Dhabi, something that is a rare event in the sport and resulted in a photo of all the drivers together away from the track that lit up social media.

“Seb is a great leader and he gave a great speech and he tried to hand down his experiences that he’s had over these years to the young guys because they’re the future,” Hamilton said about the dinner. “We had that photo and it’s the most harmony I think any driver group has ever had. Maybe not in history because there’s images of others from many, many years ago, but definitely in these 15 years.”

Saturday night Vettel led a run around the Yas Marina circuit hours after he charged to a Q3 appearance in his final qualifying session.

Sunday the team’s one-stop pit strategy put Vettel outside the top 10, but he was able to rally and finished in 10th adding one more point to his career total.

After the checkered flag Vettel took his car to the front straight and did some smoky burnouts along with the top 3 finishers who included Max Verstappen the two-time champion driving for Red Bull Racing, the team Vettel raced for from 2009 to 2014, and won his 4 titles with.

“You know how it is, I wish it could have been a couple of more points, [but] I enjoyed the race,” the 35-year-old said. “I think it was a bit of a different warm-up today, to get into the race, but once the lights go off, it’s full-on race mode.

“I think we didn’t go for the best strategy, so it was a shame, because maybe we could have turned the constructors’ championship around for us, but overall [it’s] obviously a big day. A big thank you for all the support – so many flags, so many smiling faces, which has been very, very special. I’m sure I’m going to miss it more than I understand right now.”

Vettel, who has been an active and vocal supporter of diversity, inclusion, and LGBTQ+ rights, urged the rest of the F1 grid “to carry on some of the good work.”

“The last two years have maybe been a bit disappointing from a sporting point of view, but very, very useful and important to me in my life,” Vettel said. “A lot of things happened, [there were] a lot of things that I realized.”

Just Seb inviting the paddock for a run on the track for his final weekend 🥺🏃#AbuDhabiGP #DankeSeb pic.twitter.com/oaZv1W03tB