Coming off a championship-winning IMSA season, Cadillac prepares to take its prototype cars to the global stage. GTP is the new top class of America’s IMSA championship, which will race a shared car with the World Endurance Championship LMDh Hypercar class. That means for the first time in 21 years, Cadillac will return to race at Le Mans. The brand revealed the car that race there on Wednesday.

Cadillac promises a debut at the 2023 24 Hours of Daytona ahead of a full-season campaign for the IMSA championship before bringing the car to France later in the year for the 24 Hours of Le Mans. It’s part of a renewed commitment to global racing for the marque and the car that will bring “the future of Cadillac racing.” The prototype will be fully-unveiled this summer, with the brand only sharing a few teaser images and a video to at this stage.

Cadillac’s Vice President Rory Harvey promises a bright future for Cadillac racing: “Cadillac has a long history of performance success on and off the track, which drives excitement for our fans and customers.” He credits that success with driving the “extraordinary demand for the V-Series Blackwings right after they were revealed” and growing enthusiasm for the brand’s performance vehicles. 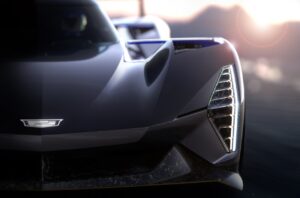 Even with the small look at the car provided, design elements from Cadillac’s current DPI prototype that just competed in the Daytona 24 with the hypercar-class layout. Lead creative designer Chris Mikalauskas promised that the car will use “instantly recognizable…brand characteristics” from V-Series performance vehicles in Cadillac’s lineup. In a racecar designed to “include form and function,” signature brand touches included will definitely include “vertical lighting” and “floating blades” to keep the car recognizable on track.

The project will be a combined effort from an in-house Cadillac Racing team and racing supplier Dallara. The Cadillac part of the project will an engine, coupled with the class-specific hybrid system. Cadillac promises that the development of the car will influence the build of its road cars, a growing performance division that includes the new CT5, CT4, and Escalade V-models with benefits to come for performance buyers.