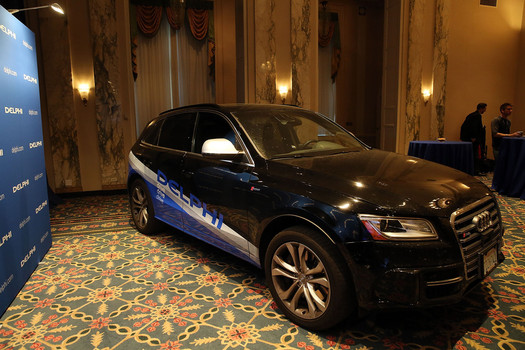 The driverless specially outfitted Audi Q5 sport-utility vehicle is displayed at the Waldorf Astoria following the car’s return from a cross country trip, a first for a driverless vehicle, on April 2, 201
(Photo by Spencer Platt/Getty Images)

Two prototype self-driving cars from competing companies nearly collided in California this week. The news was confirmed to Reuters Thursday by an executive from one of the rivals, Delphi Automotive.

According to the report, the close call occurred Tuesday on a street in Palo Alto, in the areas known as the Silicon Valley. The executive who confirmed the news John Absmeier, director of Delphi’s Silicon Valley lab and global business director for the company’s automated driving program, was a passenger in one of the cars. The other car was operated and belongs to Google.

The incident occurred as the Delphi car, an Audi Q5 crossover, was starting to change lanes. When it did the Google car, a Lexus RX400h crossover, moved in front of it forcing the Audi to react and move abruptly back to its lane.

According to Absmeier, the Delphi car coped well with the incident and “took appropriate action”. A Delphi spokeswoman clarified the incident with tech news site Ars Technica saying there was nothing wrong watih the encounter and that its vehicle behaved “admirably”.

Google played down the incident, saying early reports that the cars were involved in a “near miss” are inaccurate. It said the cars treated each other as they would any other vehicle and neither was in danger of colliding with the other.

A monthly report about Google’s self-driving car project shows that it is currently testing 32 autonomous vehicles – 23 modified Lexus SUVs and 9 purpose-built prototypes. During testing, it said, these vehicles have covered more than 1 million miles.