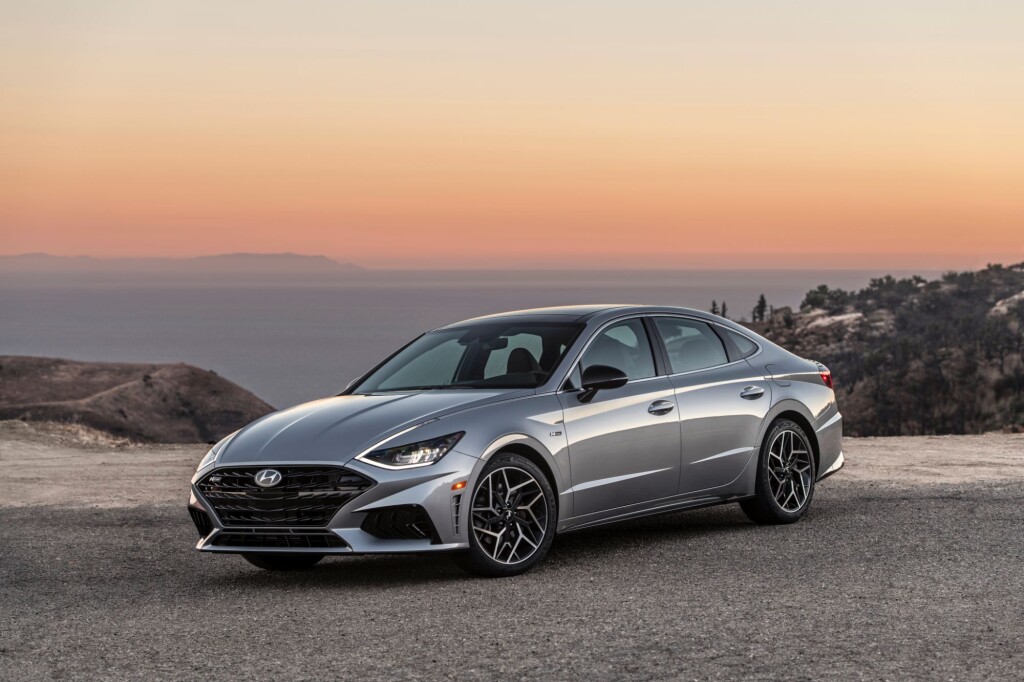 I’m usually not too fond of surprises. I suspect that has a lot to do with the fact that at my age surprises normally aren’t pleasant. ‘Oh, that knee isn’t working now’ or my ‘hipbone isn’t connected to the thighbone anymore.’ Then again you do have the advantage of being surprised when you actually wake up in the morning. So, there’s that.

Some surprises then can be good on occasion; like waking up not be covered by dirt. Hyundai has given me some pleasant sort of surprises in the last couple of weeks. The most recent occurring when they delivered me a 2021 Sonata for a recent week. Now, don’t get me wrong. The Sonata is a fine car. A pleasant midsize sedan with nice features and priced well, though a bit boring perhaps. Sort of like being a CPA; a good, necessary person, just not too fun to hang out with.

I had a week with a Sonata hybrid last July. It was an impressive midsized sedan with a capable hybrid powerplant. I liked it; I just couldn’t imagine taking a long trip in it lest I fell asleep from s the sheer dullness of the ride.

So then fast forward to this past week. Here was another Sonata, a 2021, the second model year of the latest generation. Sure, I knew I would like it, but I also figured I would be bored.

You see, this latest Sonata was the N version. I already knew that the N stands for Namyang, home to Hyundai Motor’s global R&D Centre in Korea since 1995 and for the Nürburgring, home to Hyundai Motor’s European Test Center, and according to the company the N also symbolizes a chicane. I learned that last month when I was sent a Veloster N. I also found out that the Veloster has an “NGS” button that stands for N Grin Shift on the steering wheel, and when pressed allows the turbocharger to over boost and adds more torque for 20 seconds. Not knowing any better, the first time I pressed this button I was traveling about 50 miles an hour on a relatively straight stretch of road. That was fortunate, as it turned out. I blew past a poor mom in a minivan who, like me, no doubt saw her life flash before her eyes and feared for the safety of her children.

When I first got in the Sonata N I looked, but sadly there is no “NGS” button.

As it turned out that was just fine.

The Sonata N which is new for 2021 and marks the second N variant in the Hyundai lineup, slots at the top of the Sonata food chain. It’s equipped similarly to the SEL Plus with the Tech package. But it’s far more than just a badge and some sporty looking floormats. There is also an eight speed dual-clutch automatic transmission like the Veloster, sport-tuned steering, and suspension, 19-inch tires (the rest of the lineup have 16 to 18 inch) and some N Line-specific styling cues outside like three air intakes, a new front fascia clad in black with four exhaust pipes, a black bumper and a diffuser in the back. Inside there are a few N touches with front sport seats that have some extra bolstering. 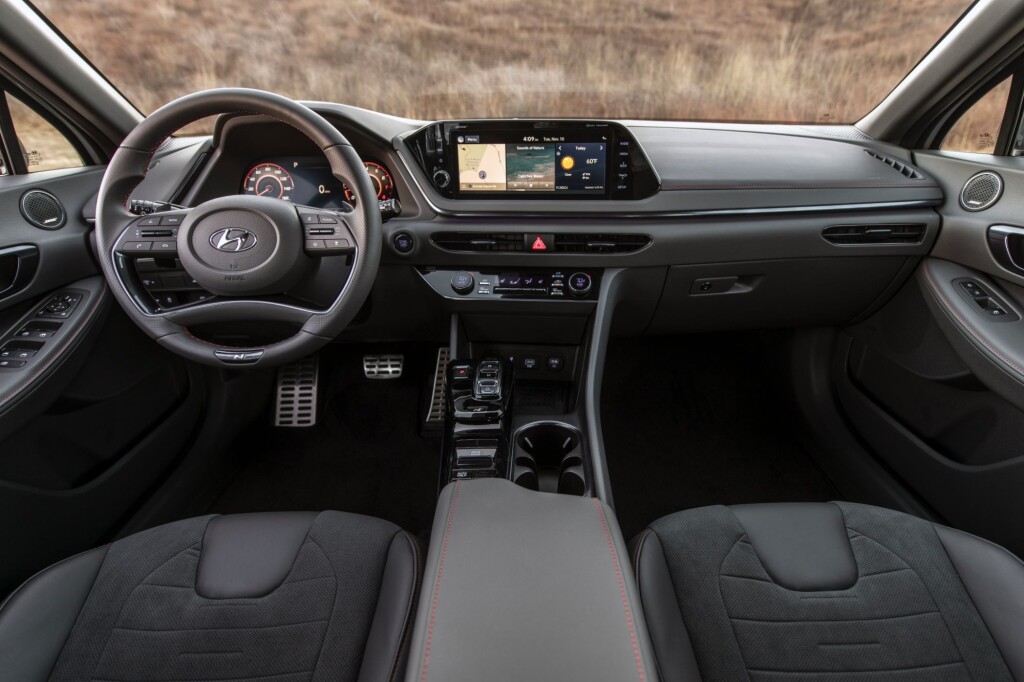 Under the hood there is a turbocharged 2.5-liter four-cylinder engine with 290 horses and 311-foot pounds of torque (a significant boost from the 180-191 horses of the rest of the line). It’s an engine shared with the Genesis G80 and GV80 as well as with the Sonata’s platform cousin, the Kia K5 GT which I drove, and loved, last November.

Like the Sonata hybrid, the N model is a very nice place to be. There’s plenty of room, and a lot of nice tech features in a dash anchored by a 10.3-inch touchscreen.

We don’t really care about all that though do we?

On the road the 290 horses through that dual-clutch eight-speed transmission which is a wet-clutch design were spot on. And yes 0-60 is just over 5 seconds is not only possible but average and the suspension seemed to giggle at aggressive cornering. The Sport+ mode could make this a relatively inexpensive track car that could easily double as the family daily driver.

There was one other surprise.

During my week I was able to take a short road trip. I used the adaptive cruise control, part of the standard Highway Driving Assist semi-autonomous tech package. The adaptive cruise control is paired with a lane centering system, something I’m usually not a fan of. I decided to try it out however and was simply amazed. Unlike similar systems I’ve tried on some high-end models which bounce the car from one side of the lane to the other like a pinball (leading to my normal dislike of such systems) the lane centering system on the Sonata was smooth. The car was kept centered in the lane and to my surprise even took some mild turns without any sort of intervention. The car warned me to keep my hands on the wheel of course but still made the turns (I of course don’t recommend you try this). The folks in Germany could learn a lesson, or two, from this.

My impression that the Sonata is somewhat boring was wiped away by the N line. It’s like a CPA who becomes a stripper outside of normal office hours. No, there is no “NGS” button, but in Sport or Sport+ mode it sure is a lot of fun.

A nice sedan with a bit of spunk and at a reasonable price. All in all, it should be no surprise considering what Hyundai has done in the last few years. With the next N line, a Elantra due out later this year, it can only get better.

Should I get one of those for a week, I certainly won’t be surprised that it is just as good as the Sonata. 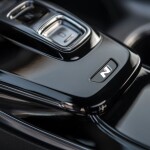 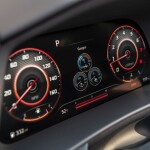 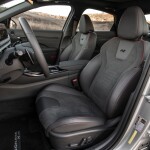 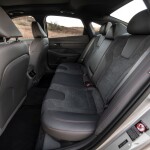 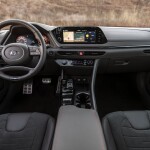 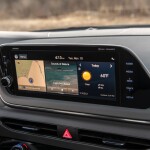 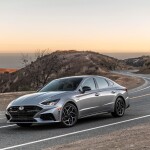 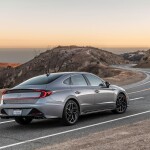 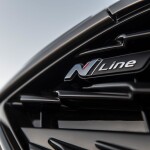 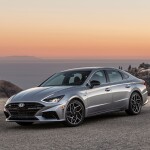 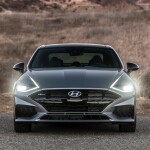 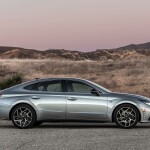 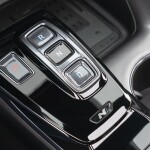 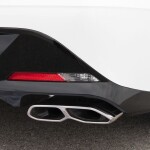