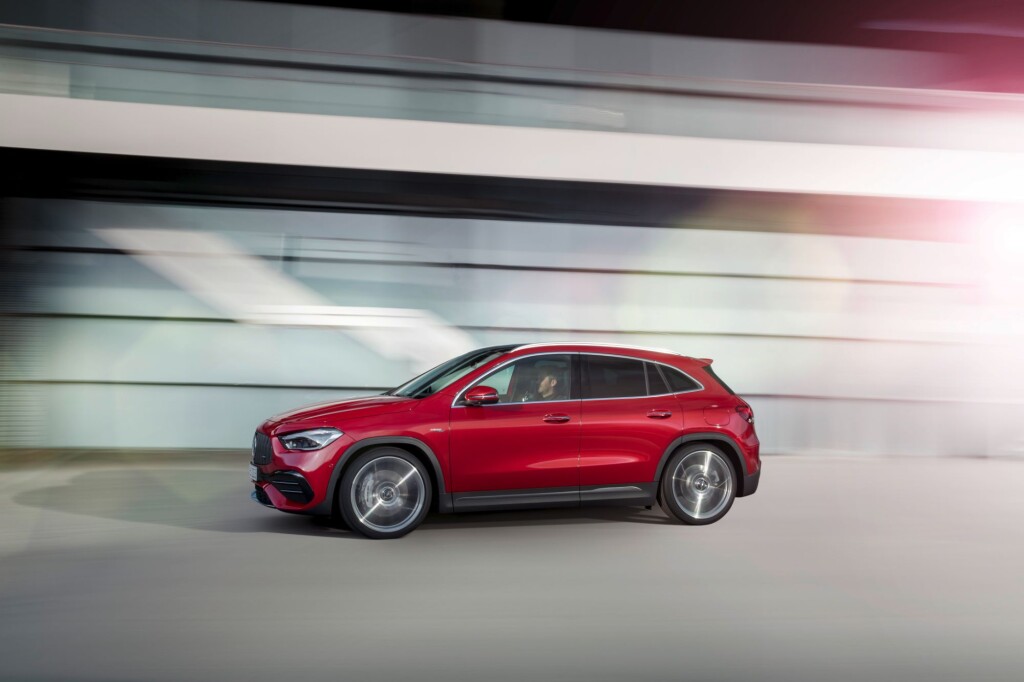 The first non-traditional car (not a sedan or coupe that is) that I owned was an almost new at the time 1986 Pontiac Sunbird Turbo GT. It was two door hatchback which I guess technically made it a three door. Looking back on it now, it was hideously ugly. Thinking back, it was actually pretty ugly for its time, but I got a good deal on it, so there’s that.

I bought that Sunbird in the time of my life I call “BK”, Before Kids. That Pontiac had a 1.8 four-cylinder turbocharged powerplant with 150 horses under its decaled hood. It had so much turbo lag that entire countries could be founded, fight and gain their independence, and children could be conceived and be born in the time it took for the turbo boost to actually do any boosting. That hatchback though proved useful as we could actually do things with it that couldn’t be done with a traditional coupe or sedan. Things like carry home a new clothes dryer with the hatch up, which at the time I thought was nice.

The second non-traditional vehicle I ever bought was a 1989 Dodge Caravan, which came after the Sunbird and came about when we entered the time I call “We got a kid now.” For the record that kid was not conceived in the Sunbird, though I seem to recall that my wife’s pregnancy went through all 9 months after I floored the Sunbird at a traffic light once and waited for the turbo to catch up.

The minivan started another period in my automotive life I simply call the “Dark Ages.” I hated that minivan, loathed it in fact. I blame my wife for being so hot that she had me wrapped securely around her cute little pinky, and insisted we needed a minivan now that we were parents.

The happiest days of my life were the days my kids were born, and the day I bid adieu to that stinking minivan.

Since then, thankfully, I’ve owned only traditional sedans or coupes.  Currently I have a VW Jetta in my driveway. Sadly however, I can foresee a time when I will have to capitulate and buy another SUV, or crossover. A non-traditional vehicle that isn’t a sedan or crossover. A lot of that of course has to do with the increasing market share of SUVs both big and small, as well as crossovers. So many of you want to have such a thing in fact that as the years roll by there are fewer and fewer sedans and coupes to choose from.

I hate you all for doing that. And I suspect I will someday be forced, kicking, and screaming I imagine, into buying an SUV, or crossover.

Of course, when that day comes, I suspect I’ll end up on a Mercedes lot.

I do wonder however, if Mercedes has turned over their entire operations to those occupying the AMG offices. I picture those who occupy the AMG offices as mad German engineers, sort of like mad scientists, manically laughing as they plot their latest scheme to take over the world. It appears everything Mercedes produces these days has an AMG badge on it. I wonder if the executives at Mercedes think that will sell more vehicles, or if the AMG engineers maybe have compromising photos of those execs hanging out with their mistresses (or to be fair in these modern times, their “misters” or whatever they’re called) in a resort in Bavaria somewhere. Either way there seems to be a heavy AMG presence in the lineup right now. But that’s not a bad thing.

For 2021 the Mercedes AMG GLA35 and its larger sibling the GLA45 are new and based on the 2021 Mercedes-Benz GLA-class, which got a complete redesign. The GLA35 is meant to be the hot version of the GLA 250, and indeed it does seem rather warm.

Naturally, the AMG GLA version gets a bunch of high-performance stuff. More horsepower, sport-tuned suspension, along with an AMG Speedshift eight-speed dual-clutch transmission and the AMG Performance 4Matic variable all-wheel-drive system. This in addition to the stylized appearance cues like AMG badging, accents, stitching and floor mats. 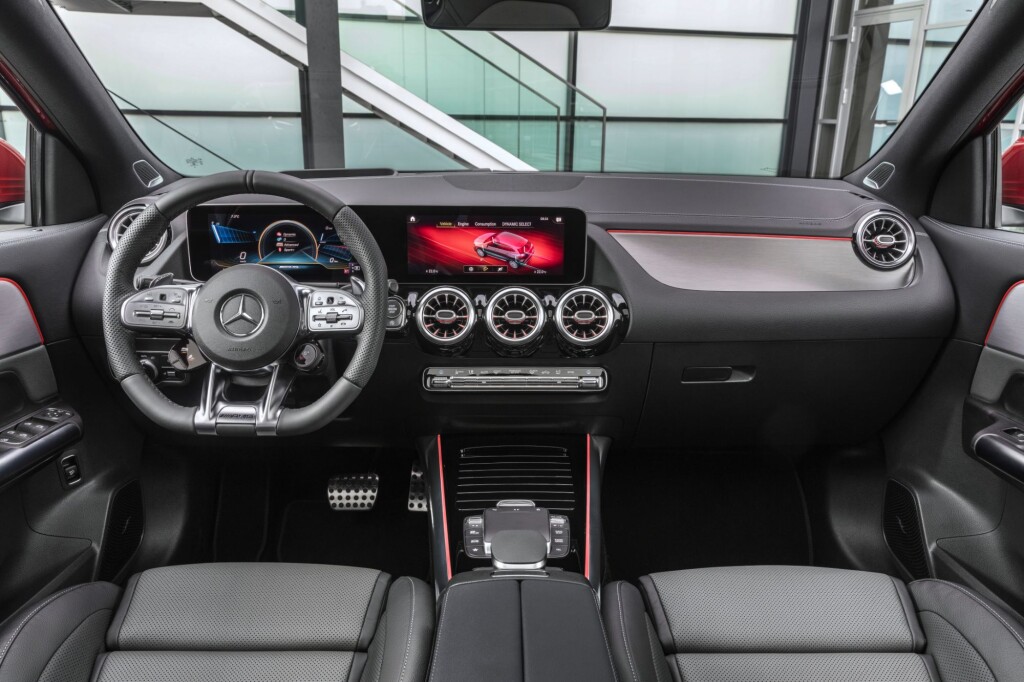 My tester for the week had the optional AMG adaptive damping system that allows a choice between three suspension control modes as well as the Multimedia ($1,295) and Premium ($800) packages.

I could drone on for days about the goodness that is Mercedes. Exteriors that have beautiful sweeping lines, with inviting curves; interiors that have everything perfectly placed and are functional and comfortable.

Inside the GLA35, there seems to be enough room for four adults to sit comfortably without feeling too confined. All the Mercedes tech with the 7-inch and 10.25-inch displays integrated into one are easy to read. Yes, you need to spend some time learning how to dial in all the tech, and how to control everything, but if you own a Mercedes you already know that.

The exterior looks remind me of plumper hatchback sort of vehicle, though with the addition of 3.6 inches in height, it doesn’t look as squat as the GLA45 I had back in 2015.

By the way, that 2015 GLA45 I had was an insane beast with 355 horses (actually thoroughbred racehorses) under the hood. Nothing like the 577 horsepower of the 2014 E63 (which remains near the top of my all-time favorite car lists) I tested a few years ago, but that GLA45 was still pretty untamed on the road. And I loved it.

Too much horsepower in the wrong hands (under the wrong foot?) can be a dangerous thing. For most of us having too many horses under the hood can lead to trouble if we don’t pay attention. The GLA35 seems to meet the criteria of being a little safer. Not too much power, though 0-60 in just under 5 seconds is still quick and with addition of the AMG tuned suspension the GLA35 will stick just about anywhere you want to take it.

Oh, by the way, did I mention the rear floor is height adjustable? That means when putting down the back seats I suspect you could even carry home say a new clothes dryer, if you left the hatch up of course.

Look, I get it. The market is awash in SUVs and crossovers. The Mercedes with all its AMG goodness can stand out from that crowd.

To me sadly, It’s getting harder and harder to find a traditional sedan or coupe. Good thing is my kids are grown, and we aren’t about to have any more. But my wife is still pretty hot, and if she wants to get a vehicle that can do something more than get us from point A to point B, something like an SUV, I suspect I’ll fold like a house of cards. Then take her right to the Mercedes lot. 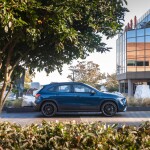 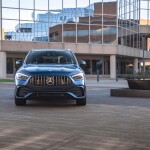 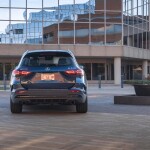 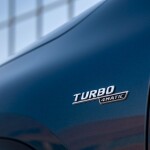 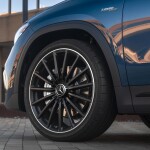 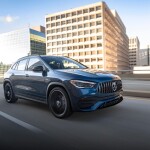 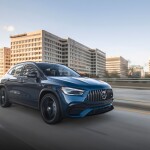 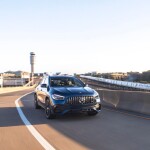 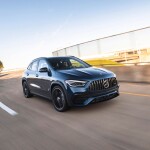 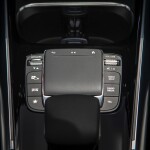 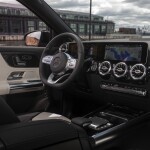 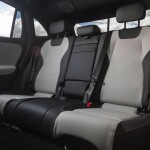 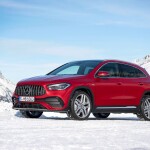 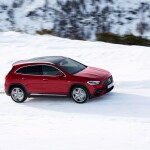 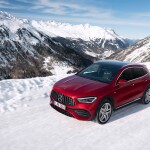 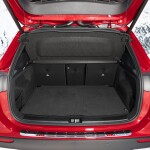 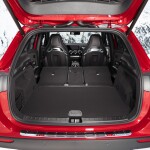 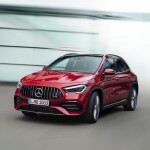 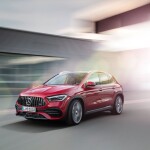 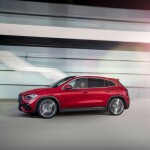 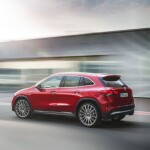 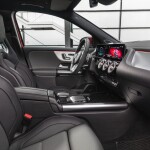 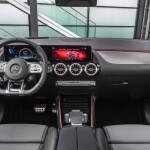 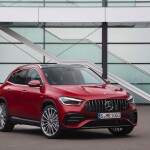 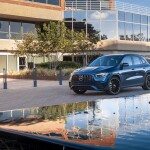 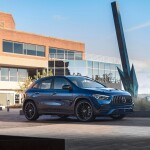 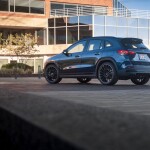