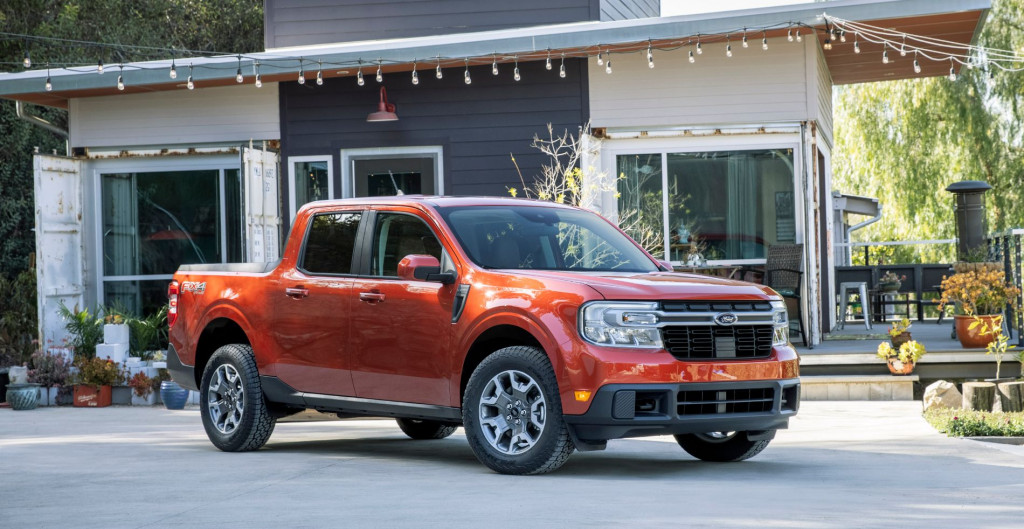 At my age I oftentimes forget why I walked into the kitchen. I can, however, remember small snippets of my youth. Like the times when I was about 12 maybe 13. My dad owned a trucking company and there were occasions when he would fill in for the overnight dispatcher and would let me tag along. In fact, it’s actually where I first learned to drive a truck, much to the chagrin of the yard supervisor I suspect. Being the boss’s son, I was allowed, after some rudimentary instruction, to drive a small yard tractor around eventually earning enough trust of the yard supervisor to be allowed to pull trailers from the docks to the parking area, and back again (I’m proud to say that not once did I ever leave a mark or dent).

Since this was an overnight shift by the time 3 a.m. or so rolled around I was dead tired and spent the rest of the shift sleeping in the back of dad’s car, which at the time was a 73 (maybe a 74) Ford Maverick. Back in those days the Maverick was a small car offered by Ford that was intended to compete with the smallish imports. It was a very affordable car for its time, and my dad had bought his new as a second car (mom always got the ‘good car’). And I spent more than one night at the trucking company fast asleep on the backseat. The Maverick lasted on the market until 1977; my dad’s lasted until he bought a VW bug in 1975 in part so he could play in snow with it (seriously).

All this came back to me recently when Ford sent me their newest offering to the pickup truck market, a Ford Maverick (seriously).

Instead of a compact car, this Maverick is a new entry into the compact truck market which now has a grand total of two vehicles in the class; the Maverick and the Hyundai Santa Cruz which I had a week with just a couple of months ago. The Maverick is the smallest truck in Ford’s powerful lineup fitting below the Ranger and the F-150. It’s based mostly on Ford’s Escape, which is a small SUV.

The Maverick can be had in three main levels: XL, XLT and Lariat all with crew cabs and either front wheel or all-wheel drive. This small truck already made news early last year when it was leaked (on purpose I bet) that the base model XL will have a starting MSRP of just over $19,900, something pretty much unheard of in the truck world. The two higher trims, that XLT and Lariat will start out at a cost of about $24,000 and $27,000.

The base model is just that. Pretty base. There’s no cruise control, but there are LED headlights, 17-inch steel wheels, cloth upholstery, power windows, AC, an 8-inch touchscreen with Apple CarPlay and Android Auto, a six-speaker stereo and forward collision mitigation. There is the Ford Co-Pilot with auto high beams, autolamp, pre-collision assist with automatic emergency braking (which includes pedestrian detection, forward collision warning, and dynamic brake support) and a rear view camera.

Some of the options and options packages include an Off-Road package (which requires all-wheel drive) with all-terrain tires, front tow hooks, hill descent control, and skid plates. There’s also an upgraded Ford Co-Pilot360 package with a blind-spot monitor and lane keeping assist. On the XLT and Lariat you can add a towing package and on the Lariat the Luxury Package with two household-style power outlet and a spray-in bedliner, an upgraded infotainment interface (Ford’s Sync 3), a wireless smartphone charging pad, B&O premium sound system, heated seats and steering wheel, adaptive cruise control and evasive steering assist.

Interestingly (and one of the news items when first leaked) the base engine for the Maverick is actually a hybrid with an estimated 42 mpg. Getting an ICE with the Maverick is in fact an option. The standard power is a 2.5-liter four-cylinder engine paired with a hybrid system to produce a combined 191 horsepower and 155 lb-ft of torque with a CVT to put that power to the road. The option is a 2.0 Ecoboost (turbocharged) with 250 horses and 277 lb-ft of torque paired with an 8-speed automatic.

There are some other noteworthy things: Maximum towing capacity is up to 2,000 pounds with the hybrid powertrain and as much as 4,000 pounds with the turbocharged 2.0-liter engine and the optional towing package and there’s a 1,500-pound payload across the lineup regardless of engine for the 4.5-foot bed. And while you can buy cup holders, phone holders, and other storage bins to arrange throughout the cabin you can also download instructions for 3D printing your own accessories by scanning a QR code inside the truck.

I had the near base line model XL, front wheel drive and the 2.0 engine for my week. Being the base model, the interior is pretty spartan but roomy enough and while there’s plastic everywhere, this is after all a pickup truck that won’t cost a great deal of cash. With the base hybrid model coming in with an MSRP under $20,000 I doubt there will be many complaints.

And about those hybrids: For once I was a bit disappointed that I didn’t get the base hybrid version instead getting the 2.0. Then I learned why: Ford announced the 2022 Maverick hybrid pickup last June and sold out of them by November and not one has yet to be delivered to customers. Ford says the hybrid model is held up as they work to get needed state emissions certifications and expects to begin delivery this month. They did apologize to those who have ordered and are waiting with a set of free accessories, according to online reports.

Unlike the body-on-frame construction of its larger cousins, and most pickups for that matter, The Mavrick uses a unibody architecture, its actually a sturdier version of Ford’s C2 platform, which was under the no longer made Ford Focus.  On the road this small pickup drives like, well, a small pickup. There’s plenty of spunk under the hood to zip around town and the small size lends itself to city driving with plenty of cargo space to carry most DIY project materials from the local home improvement warehouse. And with that 2.0 I have little doubt a small boat or couple of jet skies could follow behind with no problem.

I can always tell how popular a vehicle I’m driving that week is by the number of parking lot conversations, or the stares at the stoplights and during my week both happened a couple of times. The truck buyers it seems are clamoring for a small pickup and the Maverick may just be what they want.

Sure, there is that Hyundai Santa Cruz and I liked that as well, but with an MSRP of just over $39,000, even a fully loaded Maverick will still be cheaper. Besides, there is one big difference between the Santa Cruz and Maverick: I could easily sleep on the back seat of the Maverick. 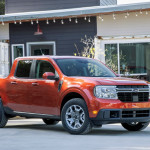 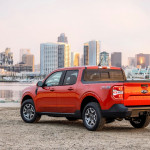 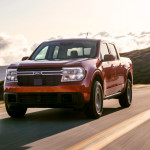 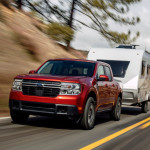 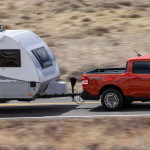 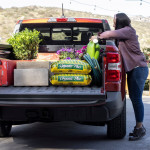 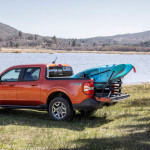 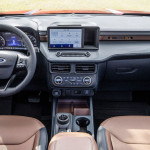