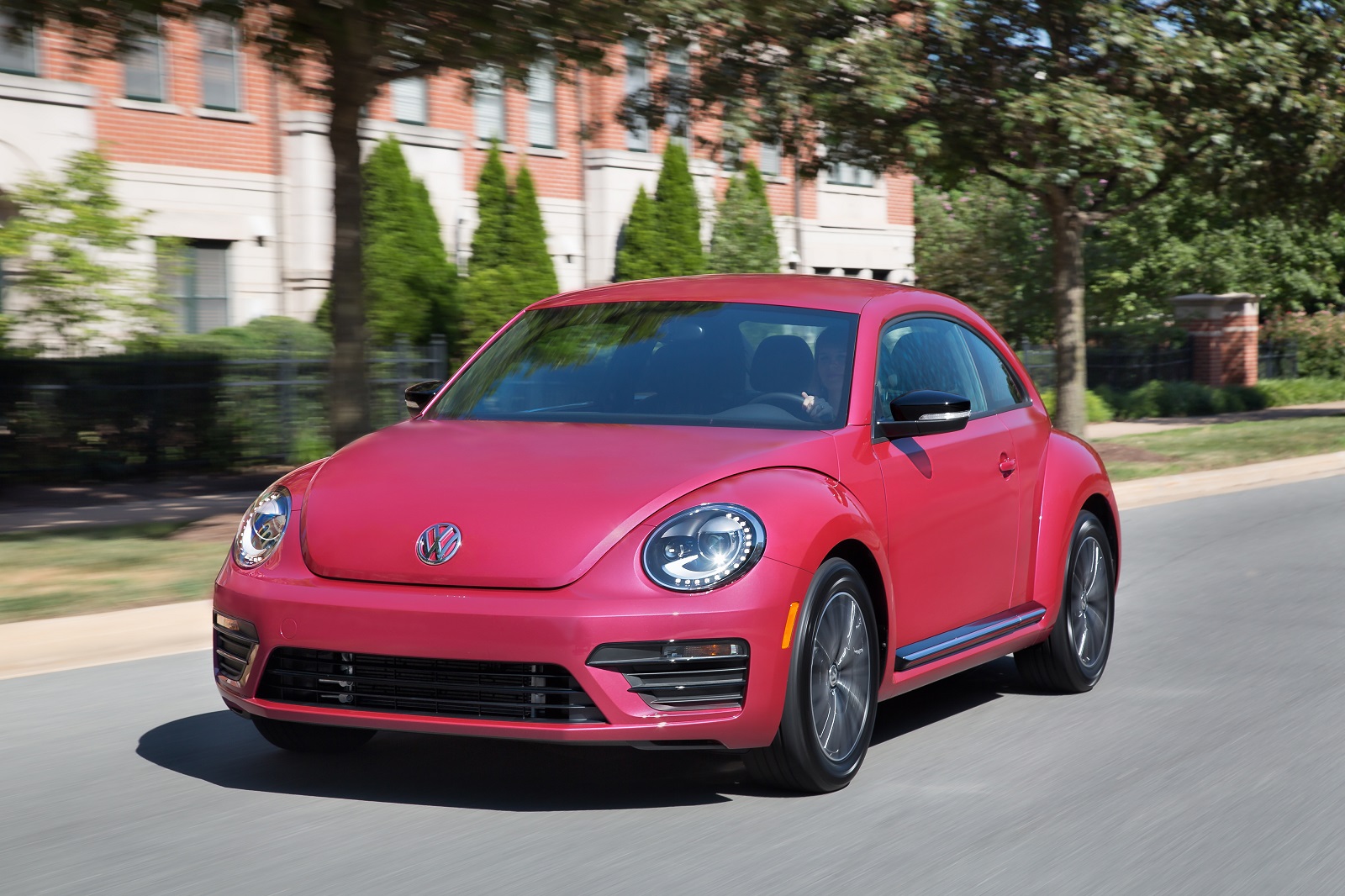 I once had a racecar driver tell me he really doesn’t care what his racecar looks like on the outside.  “Can’t see what it looks like when I’m racing it,” he said.  True. A racer might rave about a paint scheme when standing outside the car, however that’s usually because they must do so for their sponsor. “This Acme Biscuit and Gravy Ford sure does look racy!”

The truth for all drivers is that we really can’t see what our car looks like when we ‘re driving it. Behind the wheel our car we can be anything we want it to be. Many times back in the day, I wheeled my Dodge Caravan like it was a Ford Thunderbird and I was trying to pass Bill Elliott on the last lap at Talladega.  Of course I always won, at least in my mind.

I tried to console myself with these thoughts when VW told me recently they were delivering me a 2017 Beetle for a week.  Now, I generally like the Beetle; fun car, well made and affordable. This most recent delivery however, had somewhat of a twist. This 2017 Beetle, the rep said, was the limited edition Pink Beetle.

Well I knew I’d have to drive it. After all, I do like the Beetle, and as my racecar driver friend said, “Can’t see what it looks like when I’m racing it.”

And Elvis did drive a pink Cadillac, and Bruce Springsteen sang about one,  so there’s that.

I was a bit relieved when it was finally delivered and saw it’s actually a color VW calls “Fresh Fuchsia Metallic”.

“At least it’s not Mary Kay pink,” an office mate quipped.  “It’s so cute!”  a younger female coworker mused somewhat sarcastically. “You should put those fake eyelashes on the headlights.”  My office mates all laughed. It was going to be a long week. 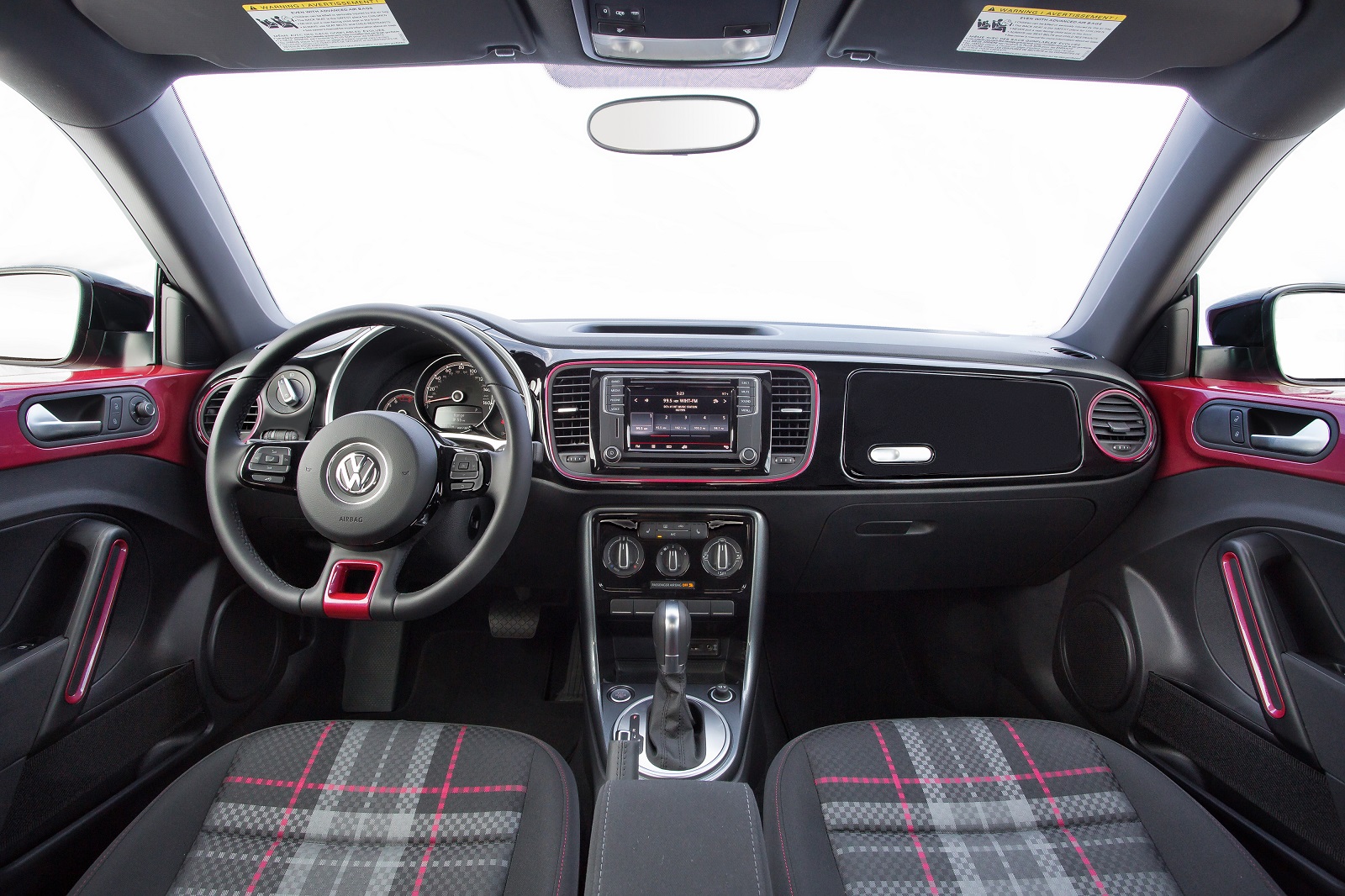 The model is actually called #PinkBeetle, and it’s the first-ever vehicle officially named as its own hashtag.  The unique paint is contrasted by gloss-black mirror caps and black running boards. Interior design features of the #PinkBeetle include a black dashpad with surrounding pink accent; a leather-wrapped multifunction steering wheel; Pink Club cloth seats, reminiscent of the signature plaid inserts of the GTI; and pink piping. It’s available as a coupe or convertible.

In addition to offering the limited-edition #PinkBeetle, the 2017 changes for the Beetle include minor design changes in the front and rear bumpers, and a manual transmission is no longer offered in the US.  The Beetle is still available in S, SE, SEL, Dune, and R-Line trim levels in addition to the #PinkBeetle.  The SE and SEL get a new painted center console and climate faceplate, and the SEL gets premium features including duel-zone automatic climate control, the Fender Premium Audio System, and Park Distance Control.

Under the hood, the 2017 Beetle offers two engines and transmissions: The 1.8-liter TSI turbocharged and direct-injection four-cylinder engine (170 horsepower and 184 pound-feet of torque) with six-speed automatic and the 2.0-liter TSI turbocharged four-cylinder engine (210 hp and 207 lb-ft of torque) with the six-speed dual-clutch automatic transmission. The 1.8 is standard on the S, SE, SEL, Dune and #PinkBeetle , the 2.0 is standard on the R-Line.

As I have found with the other Beetle models I have spent time with, this new one is just as fun to drive. Peppy, responsive and roomy the Beetle is small and powerful enough to zip through traffic, but large enough inside to be comfortable.

While I’m not quite sure I would purchase a pink car (unless I was a reincarnated Elvis), there is little doubt I would own a Beetle.

When my week ended, I had enjoyed the time behind the wheel. When I was looking at it from the outside, well that was a different story.  After all I’m not Elvis, and I’ve never sold Mary Kay cosmetics. But as they always say, “Can’t see what it looks like when I’m racing it.”

All specs can be found here (PDF). 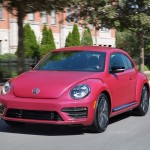 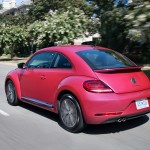 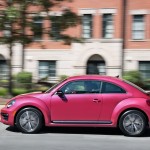 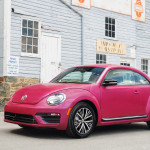 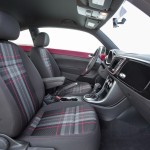 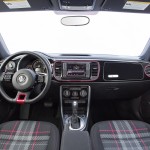 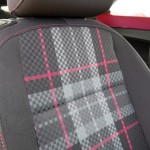