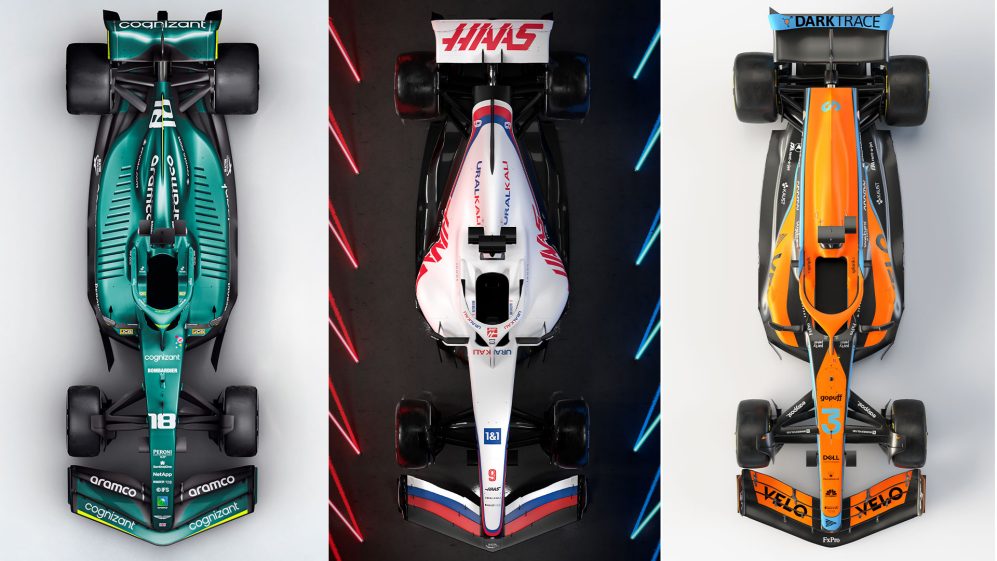 What a week it has been. The glorious new era of Formula 1 has finally been born with four new liveries and two fully functioning 2022 cars. Our first new car came from Haas, followed by Red Bull, Aston Martin and McLaren. Read on as we take a deep dive into everything F1 this week, including a surprising leak!

Across all the articles we’ve seen so far, every team has been heavily focussed on the B-Wing. The B-Wing is a returning part that was banned in 2017, however, now it has a much more prominent role. As you can see in the image below, the B-Wing is essentially a miniature version of the big rear wing but mounted around the exhaust pipe. The purpose of this is to a) collect the dirty air and aid the car behind having a clearer path but most predominantly b) to give extra rear downforce. The key areas that affect the downforce of the B-Wing and even the diffuser are the sides of the car which is why teams have adopted such different side pod designs. The air that flows of the side-odd is represented by the green arrows and hit the B-Wing to create downforce represented by the red arrows. So far, all the designs follow one of two philosophies, either to control the air and directly feet it to the rear of the car (qualitative) or to give it the clearest path possible for the maximum quantity of air (quantitative). 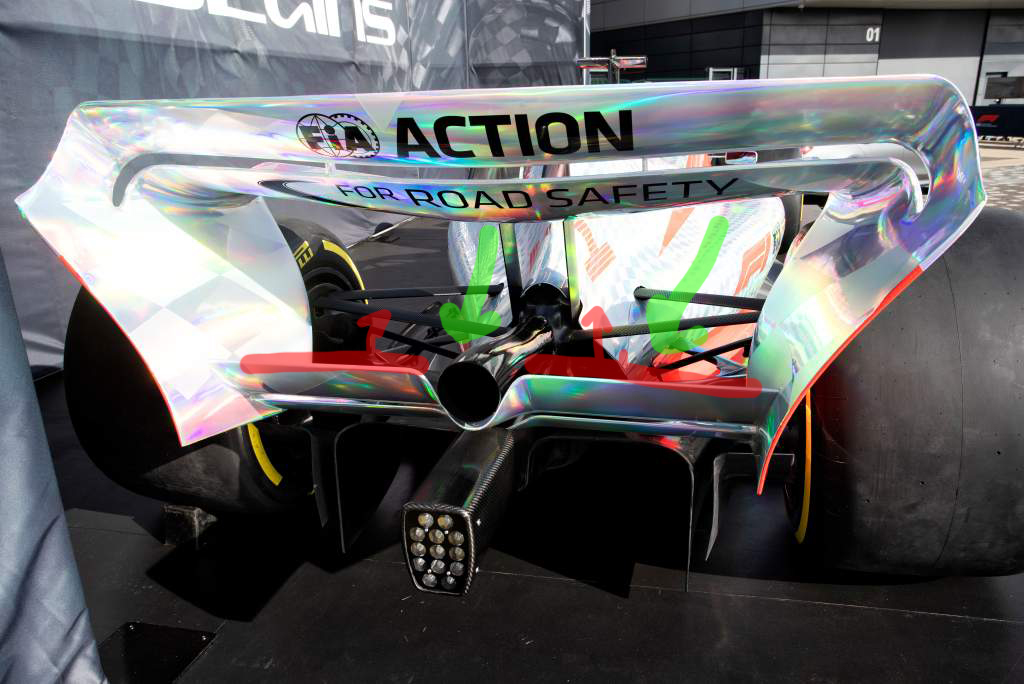 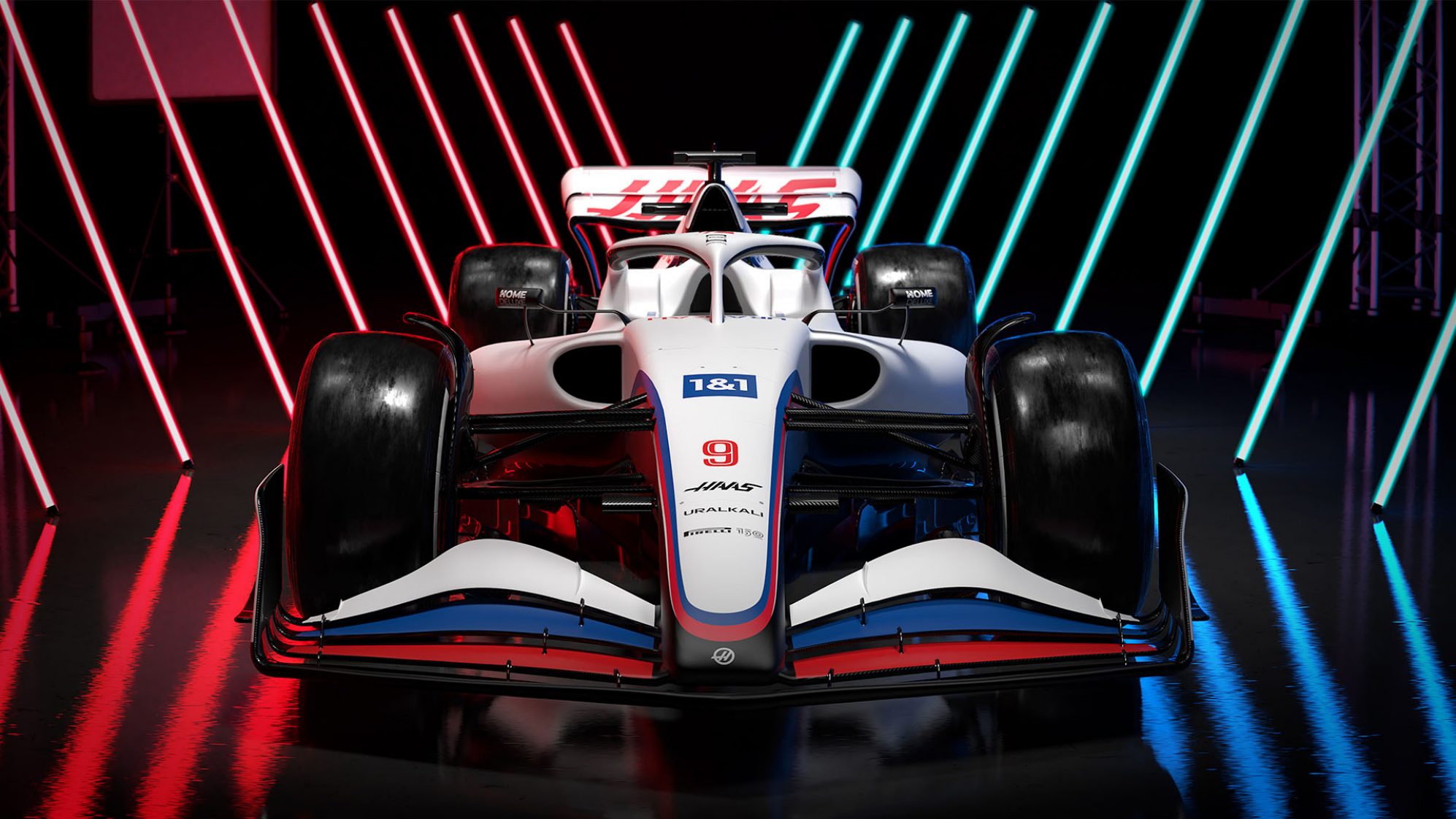 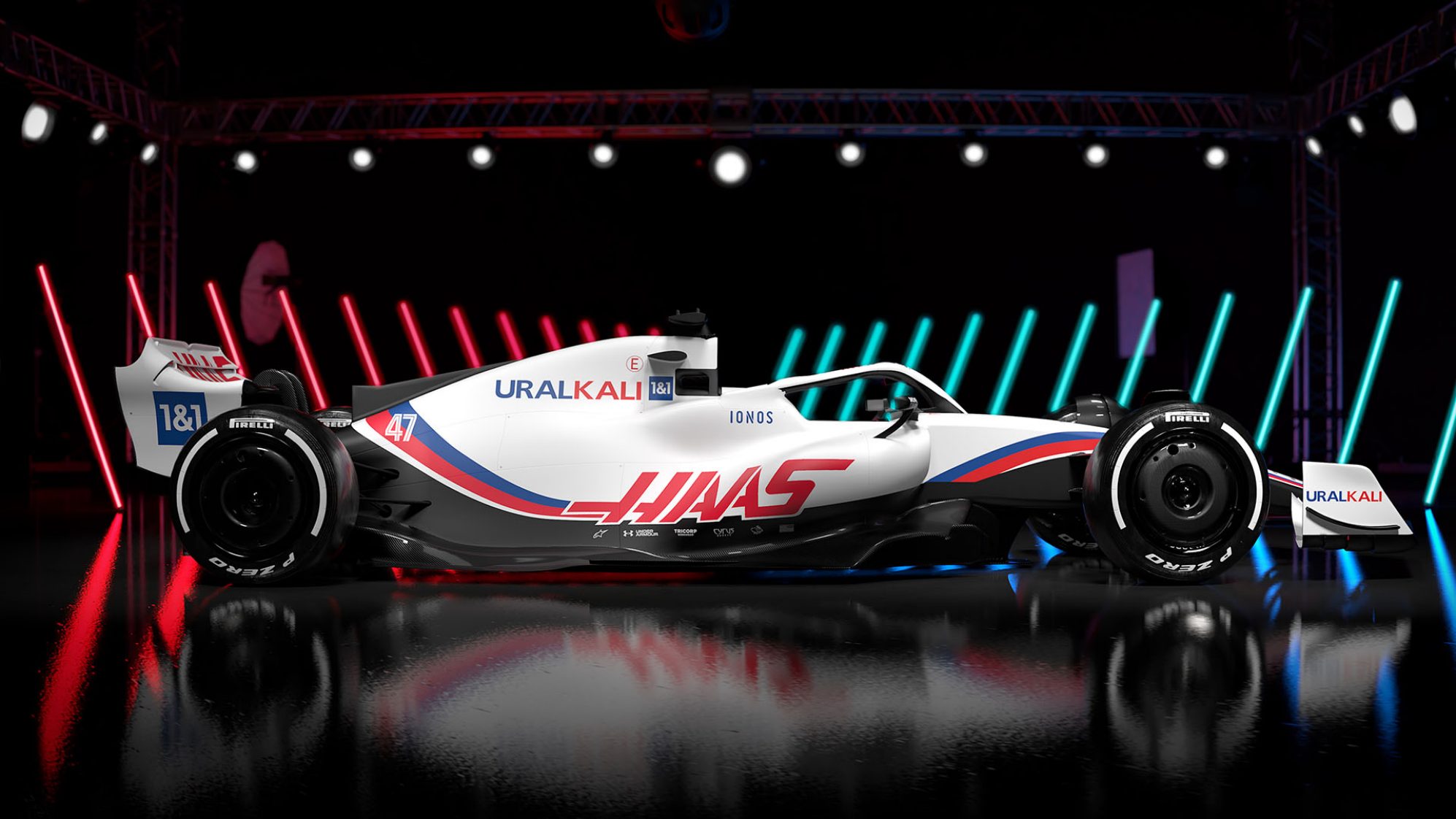 Before we dig into the livery design it must be said this is only a render. A render that is only a foetus of the 2022 design from Haas’s designers. So, don’t pay much attention to the bodywork, only what’s plastered on it: the Russian livery. Due to the cars very aggressive side pod design that follows the quantitative philosophy, the red and blue stripes are now cast far lower before being intersected by the Haas logo. The top white stripe is gone and this element of the Russian flag design bleeds into the rest of the car. Otherwise, the livery is identical to last year, with the tri-coloured front wing arrangement and pinstripe down the sides of the nose. This year’s design is better; simpler and cleaner but still quite average. 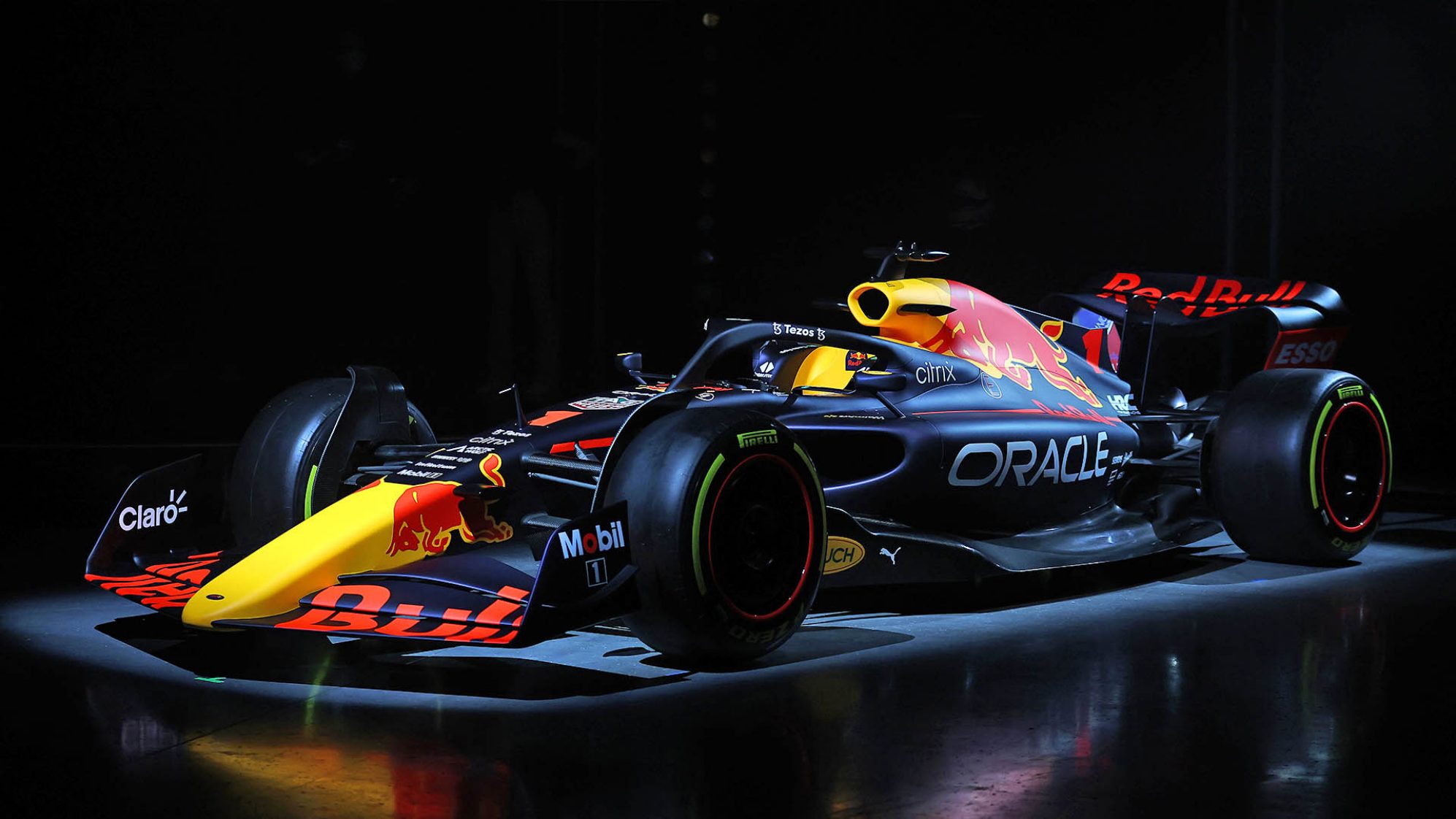 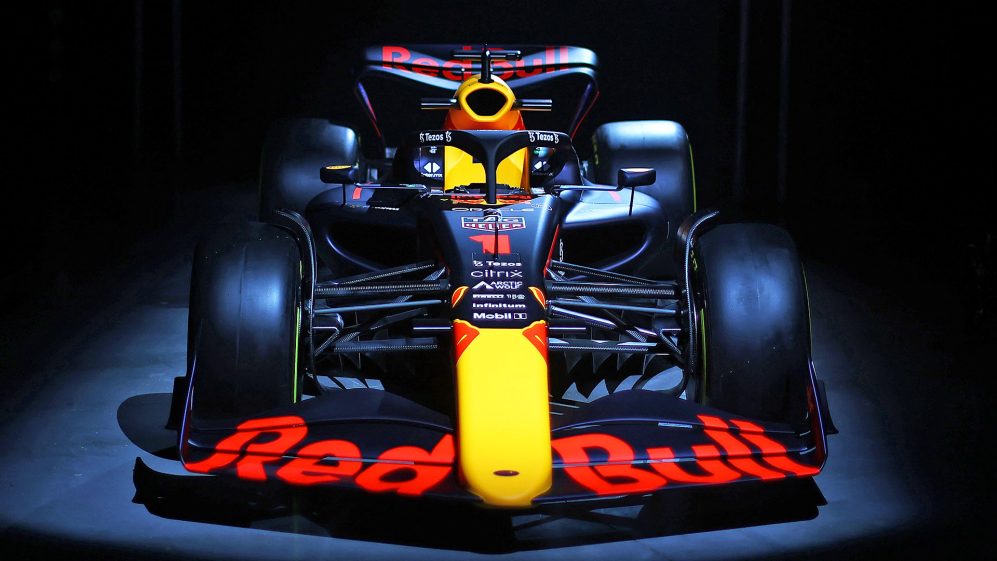 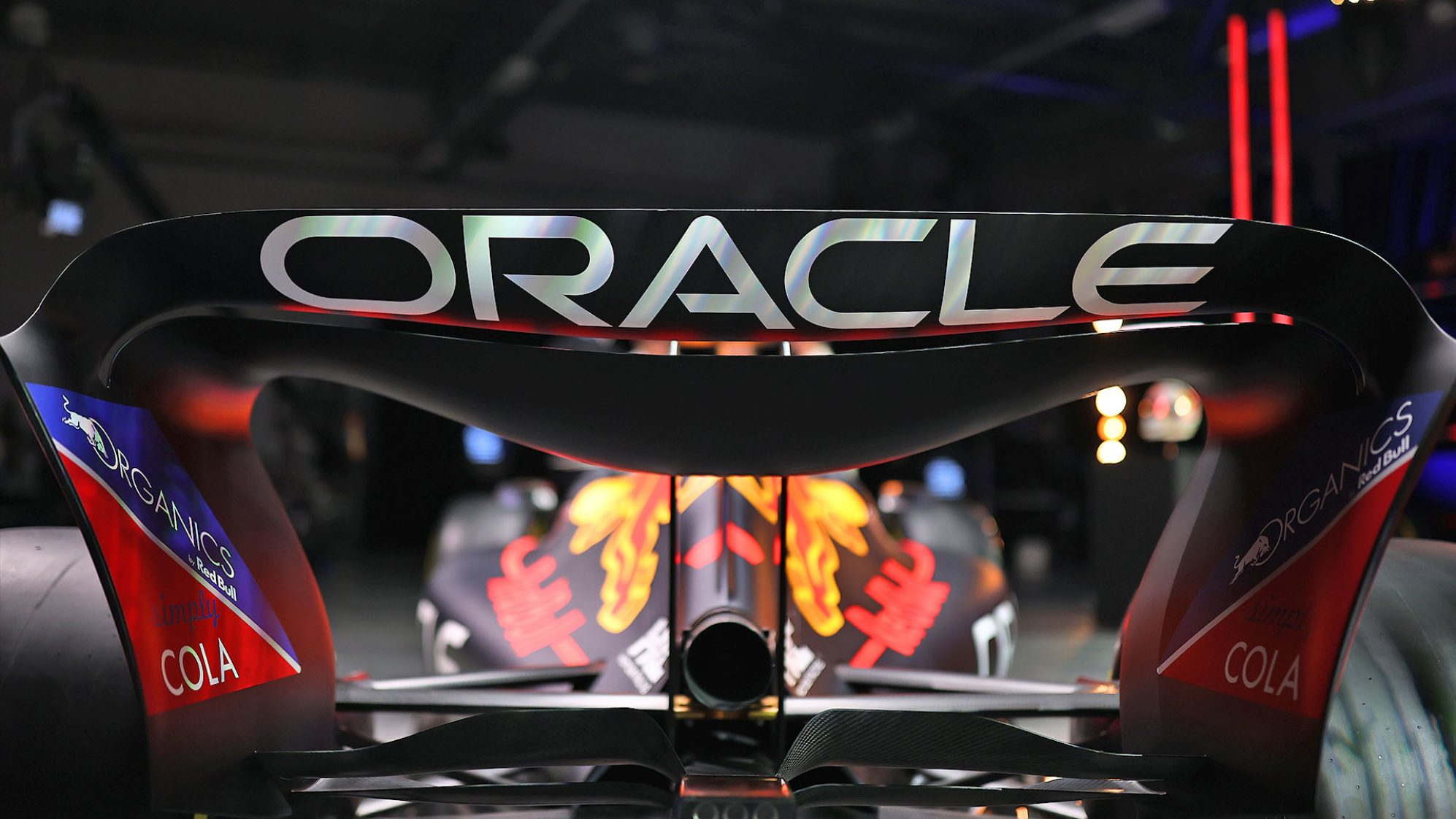 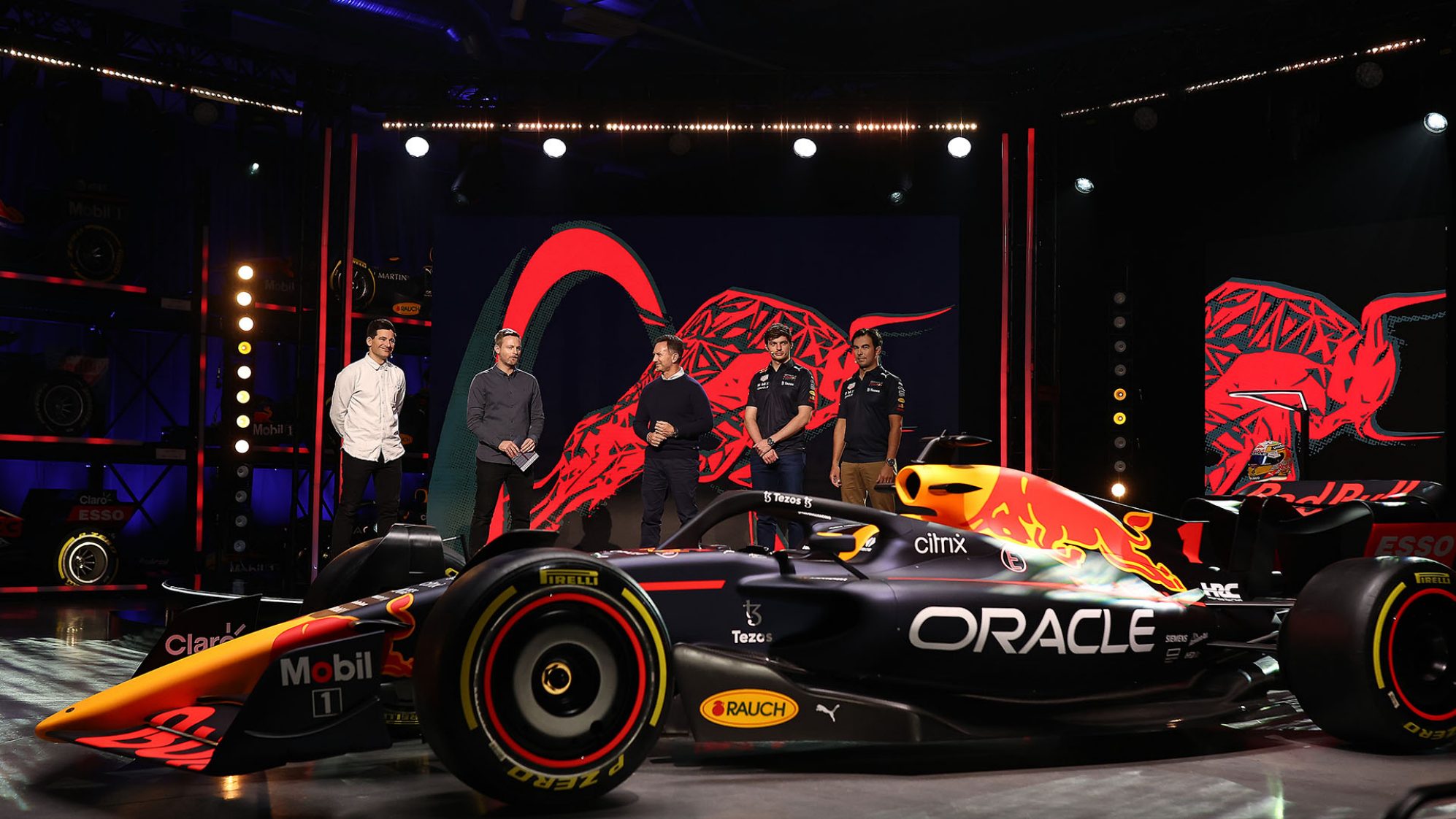 Max Verstappen’s title defending season kicks off here. With a lump of carbon fibre that is not the Red Bull RB18, signifying the quotation marks above. This instead is a slightly adapted F1 show car, however, it does bear one truth in its livery. The key change of course being the huge, white, Oracle logo adorning the sides. The Red Bull lettering has been pushed up to the place left by the Honda badges, so in a way, its all slotted into place nicely. Round the back, another large Oracle logo is featured on the wing and the title-flexing number 1 is on the small rear fin. Going full circle, to the front its a case of deja-vu as the livery is identical, bar the extended yellow section on the front nose. In fact, the entire car is a deja-vu however the fourth colour (white) adds a nice new contrast to freshen things up. We’ll have to wait a while longer to see genius Adrian Newey’s real design. 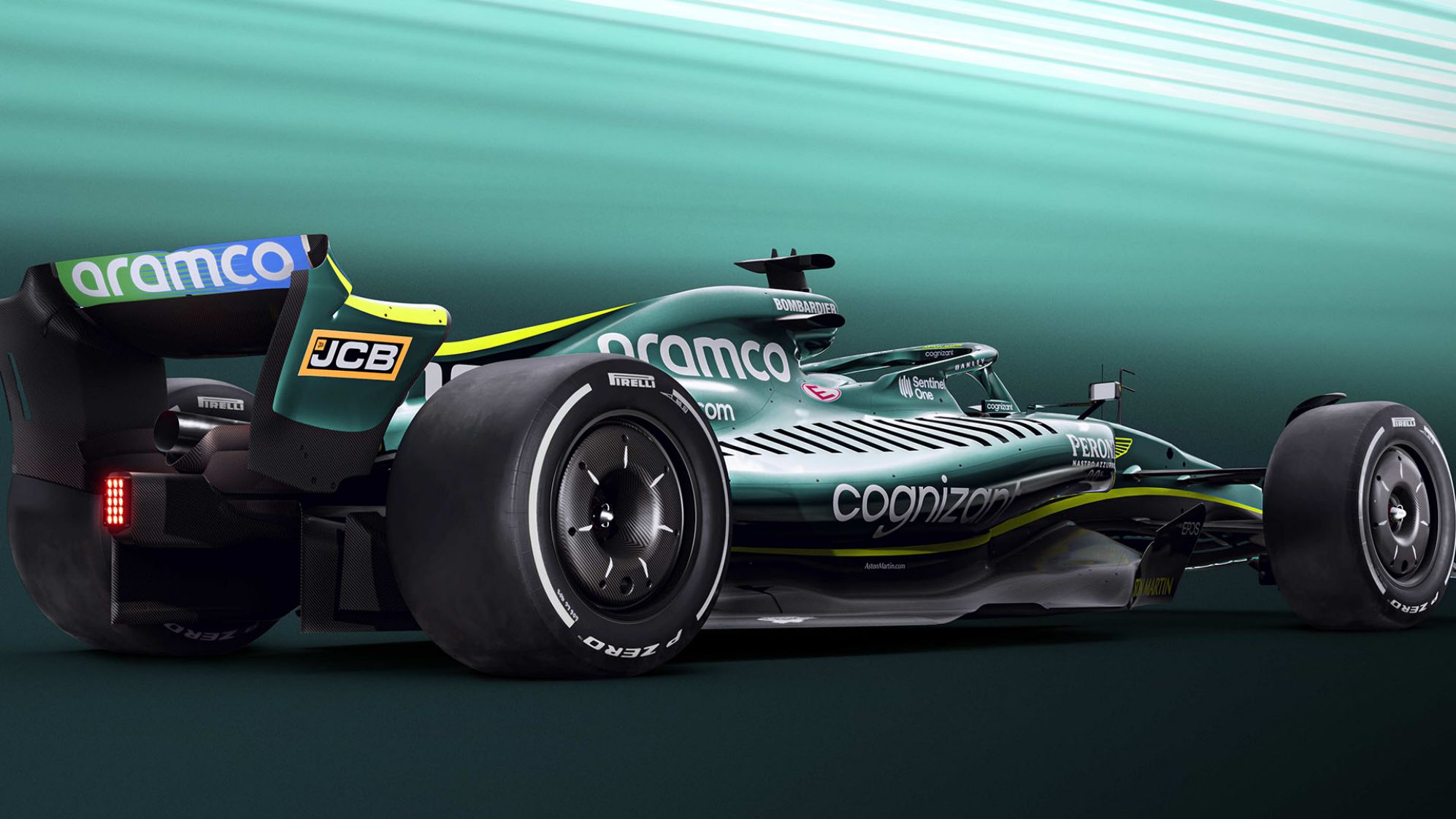 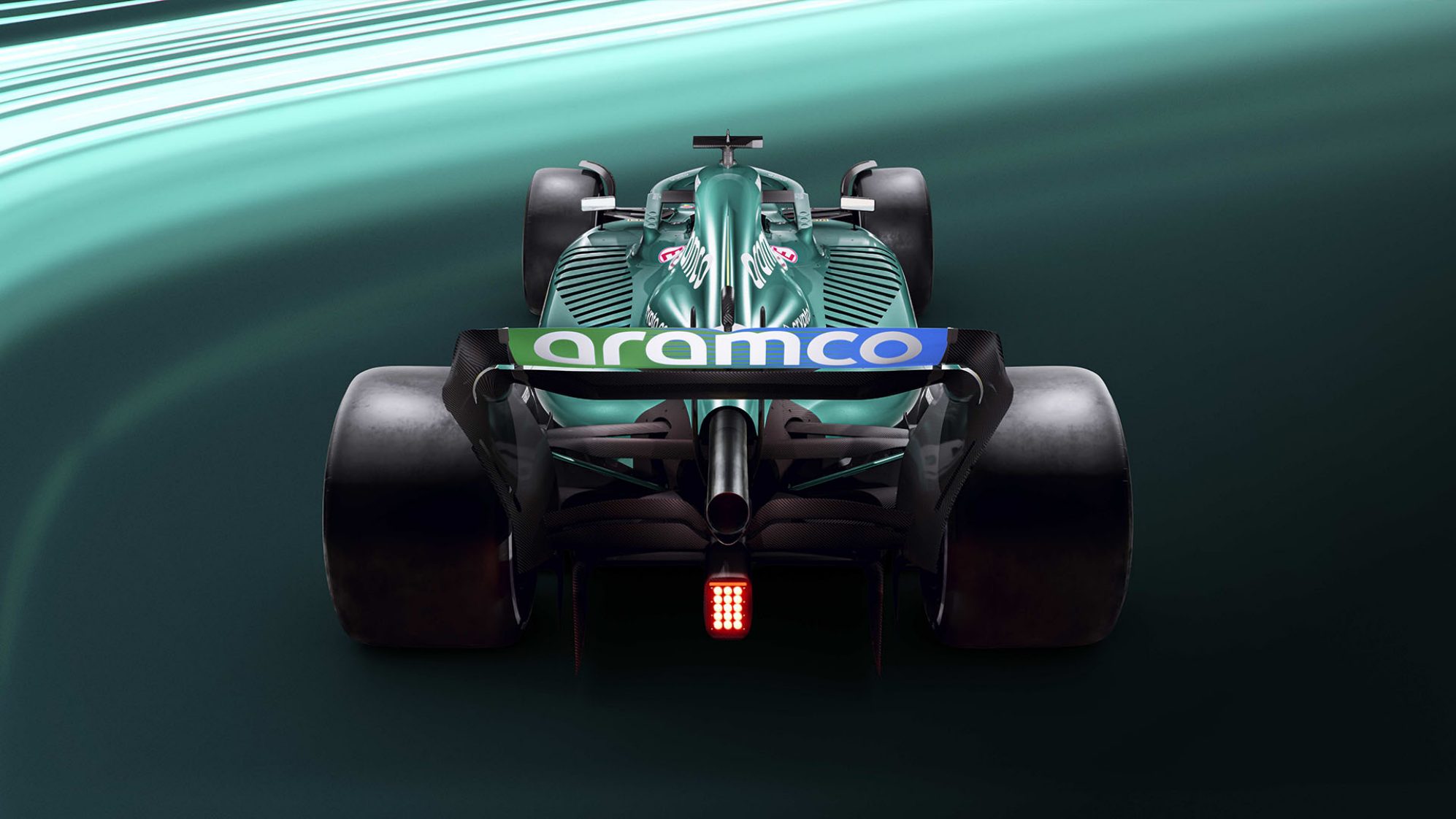 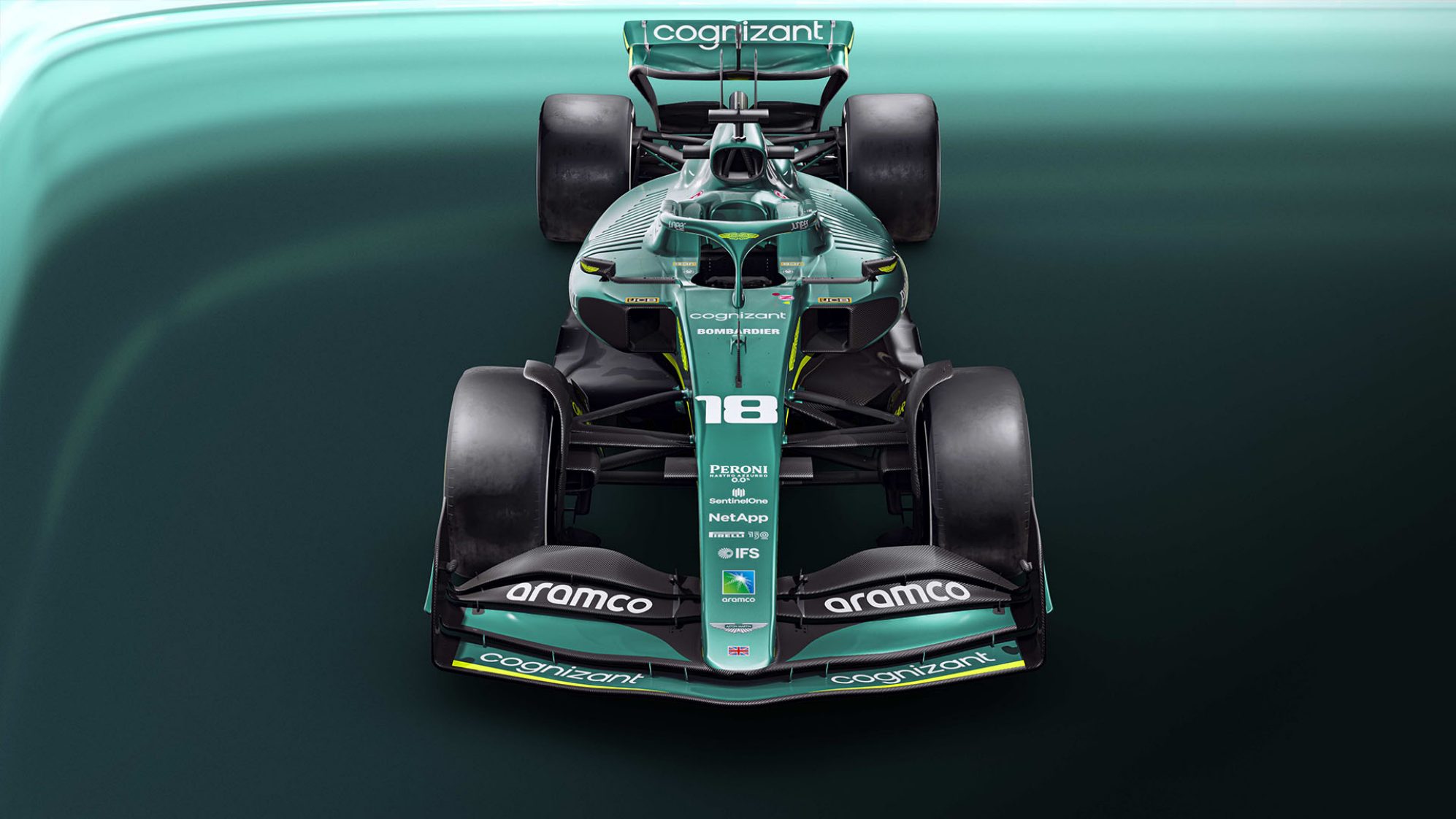 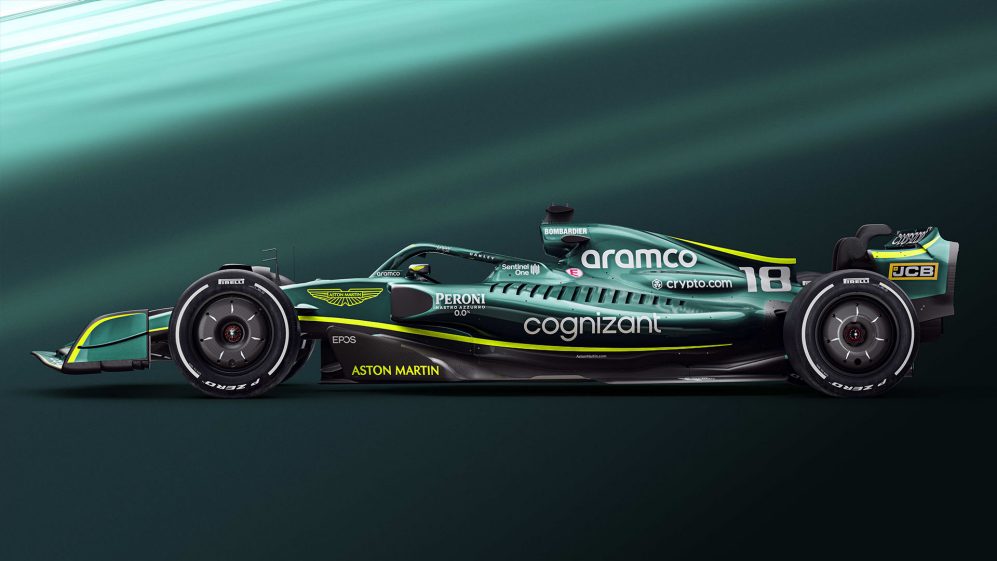 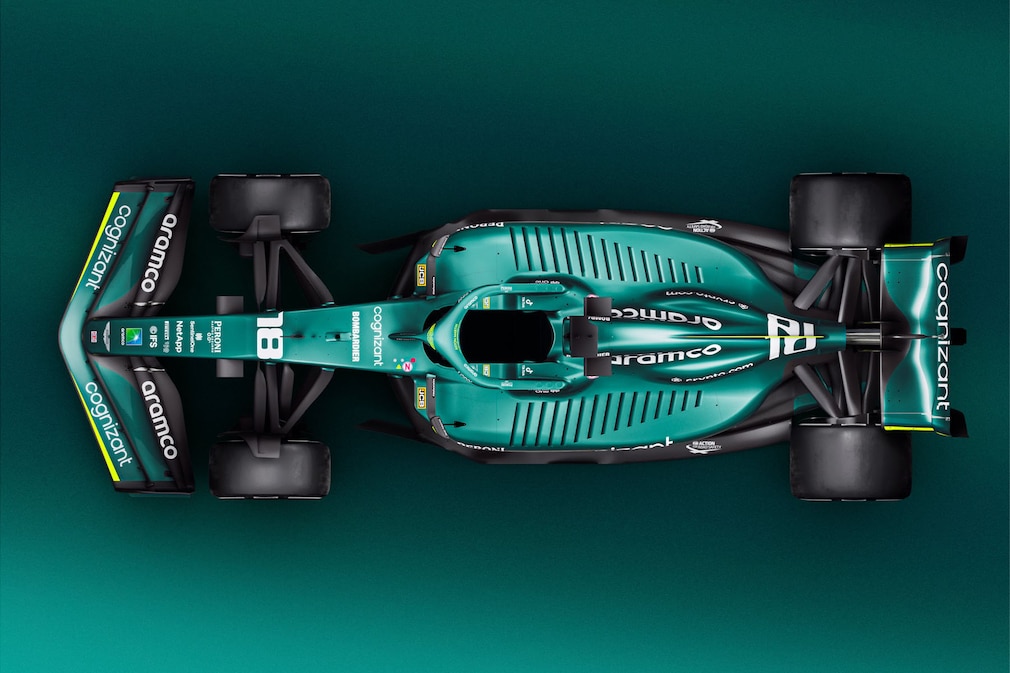 The first of two real 2022 cars we’ve seen comes from Aston Martin, in the form of the AMR22. Featuring an aggressive front wing angle and shorter-than expected-nose, the design is interesting, to say the least. It runs push rod suspension at the front and pull rod at the rear. Further back, there are very small intakes, almost twinning that of the Haas above. The key feature of the Aston though is its very boxy side pods following the qualitative ideology. They are as wide as possible and extend at this width up until the last moment before the rear suspension assembly. This is to promote air flow from the front of the car to follow underneath this big overhanging box, giving it a defined and clear path. This design means the car is controlling the air for as long as possible. It isn’t without its disadvantages though, as it limits rear ducting so it needs cheese-grater holes on-top to keep the thirsty Mercedes engine cool. The livery uses a less metallic and lighter green that won’t look black in the shades of the world’s circuits and the pink is replaced by the original acid green that Aston wanted to use from the start. 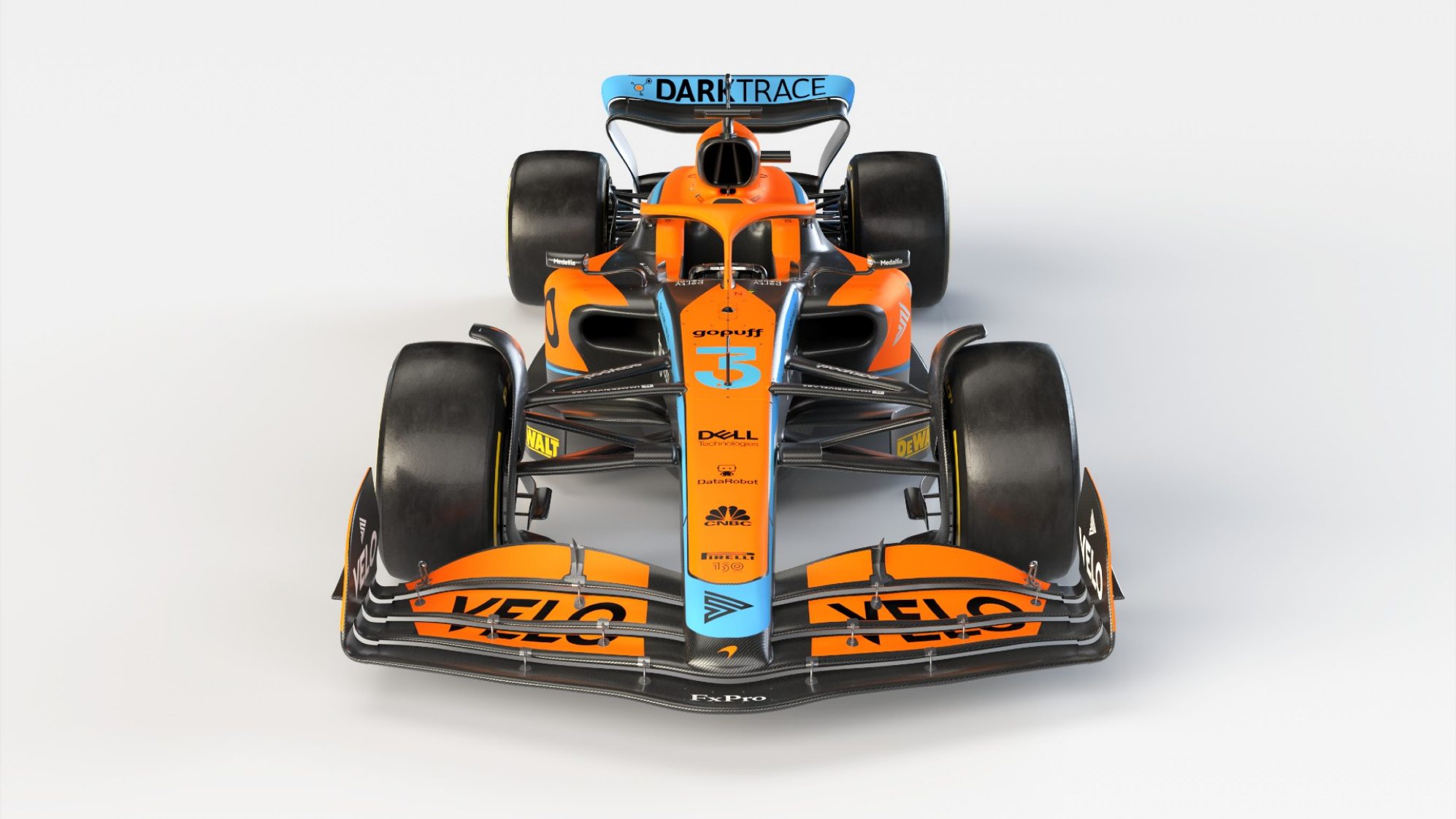 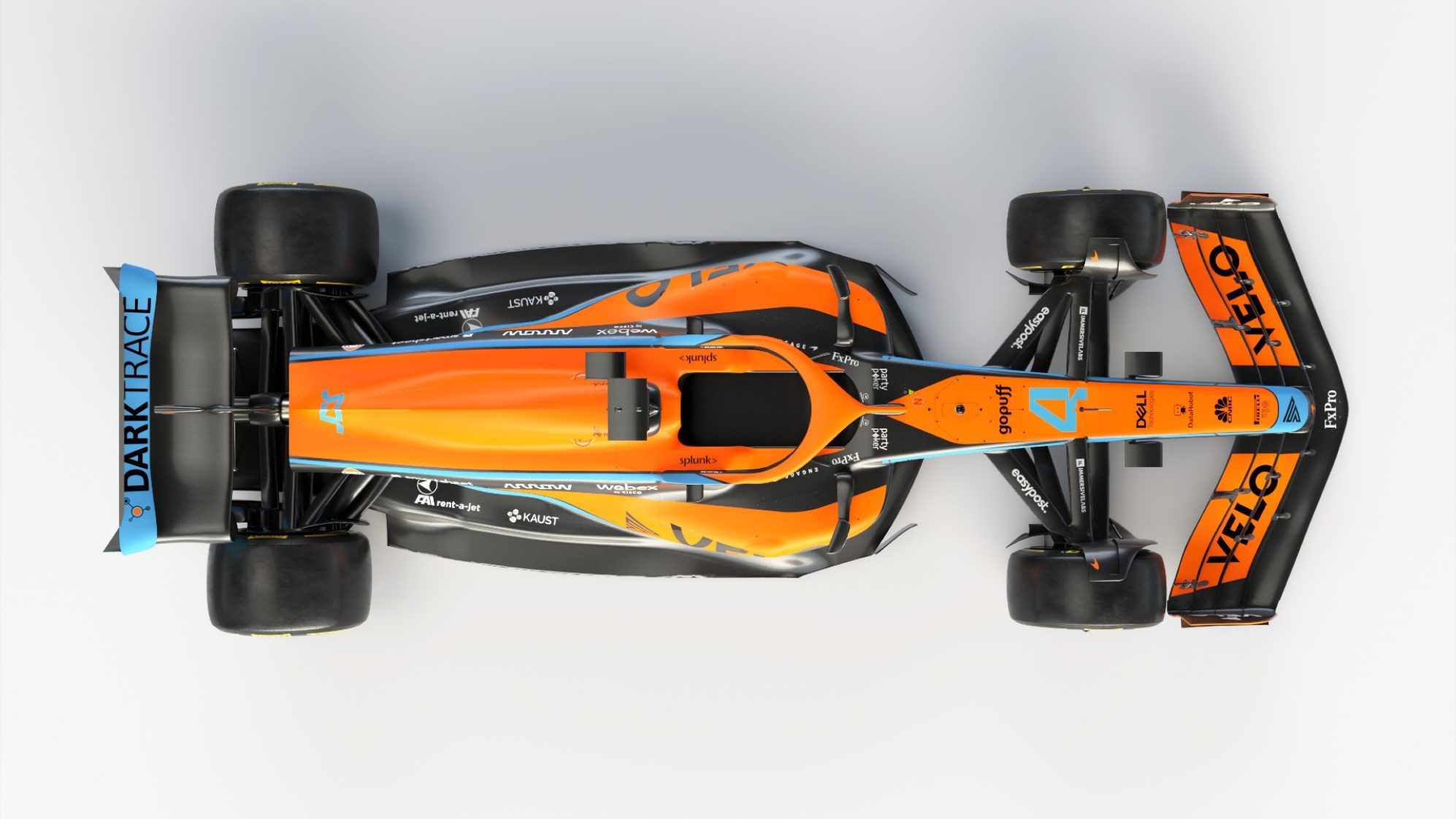 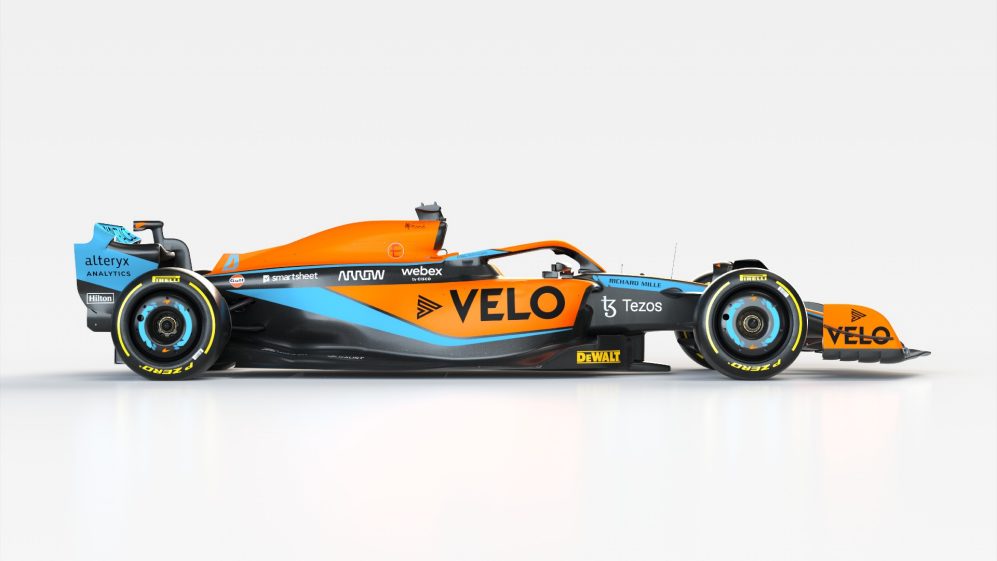 Certainly, the boldest new livery comes from McLaren, the warmer orange and lighter Gulf esque blue make for a stunning combo. New driver fonts to mimic McLaren’s Extreme E outfit with extended exposed carbon on the bodywork complete a stunning look for the MCL36. The new livery is very similar to the Gulf livery used in Monaco last year that was hugely popular. However, this year its got a similar vibe but clear roots in the cars of previous years with the predominant orange. Starting at the front, the McLaren’s front wing is less upright than the Aston but its nose is shaped and ends in a similar way. Interesting both this and the Aston use Mercedes engines but the McLaren uses far larger side pod entrances. The McLaren also has smaller panels around the ground effect tunnels behind the front wheels. This could be a Monza style spec for low downforce but we won’t know until racing starts. The McLaren’s side pods are between that of the Haas and the Aston, quite shrink-wrapped but still a smooth curve for the air to follow. This design is the result of push-rod rear suspension that is mounted higher up meaning air can get through to the B-Wing better. This is also the first car to use the rumoured pull-rod front suspension design that will be the biggest factor in this car being really fast or off the pace.

The final bit of news this week is this leak of the new AlphaTauri. A new livery heavily like the 2020 car but with some exquisite new teaks to the logo and branding. We shall find out what the whole car looks like later this week. 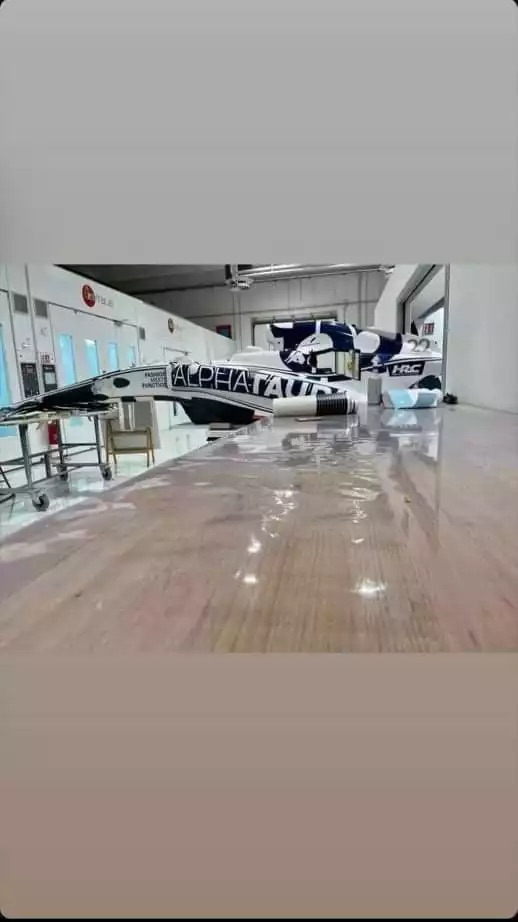